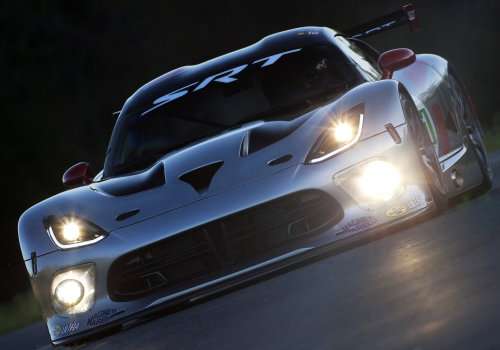 We have known since the debut of the new 2013 SRT Viper that there would be a Viper GTS-R that would put the supercar back into factory backed LeMans racing and while information was short at the New York Auto Show debut – more information has quietly been posted on the DriveSRT website giving us a good look at what the SRT team to get the new Viper into the 2012 American LeMans Series.
Advertisement

While most race models in racing classes like the GT class of the American LeMans Series are higher performance versions of production road cars, the 2013 SRT Viper GTS-R is actually tuned and – technically – lower performance than the 2013 SRT Viper that will arrive in showrooms later this summer. The 2013 SRT Viper and Viper GTS that will appear on American roads this summer are powered by an 8.4L V10 that churns out 640 horsepower. Unfortunately for the Viper race teams, the ALMS GT Class has a limit of 5.5 liters and 500 horsepower so the engineers behind the GTS-R from Chrysler Street and Racing Technology group had to meet with ALMS officials to find out what they had to do in order for their V10 powered supercar to be legal to return to the ALMS. The result was cutting the engine from 8.4 to “just” 8.0 liters and adding a sort of restriction system to limit the power output to right around 500 horsepower. While the initial Viper GTS-R race cars that dominated the GT Super Class in 1999 and 2000 had 8.0L V10 engines so they did not have to cut engine volume – even those old school race Vipers had to keep power at 500 with the use of unique race-only components. Ironically, the end result is a race car that is conceivably slower in some circumstances than the street legal road version of the 2013 Viper. Also, this new engine is designed to run on E85 Ethanol; which is a mixture of 85% ethanol and 15% gasoline.

We say conceivably because power is only a part of the equation, as the SRT team has done far more than just tinker with the engine. First of all, even though the 2013 Viper GTS-R uses the same chassis with a 99” wheelbase, an Xtrac rear transmission has been installed to help with weight distribution and handling. Next, the body receives new carbon fiber panels that give the car a wider, lower stance (extended to the limits of the ALMS GT Class) while also lowering the overall weight of the car while the massive rear wing leaves no question that the GTS-R is intended for serious race use. This wider body allowed the team to equip the GTS-R with a wider front and rear track; making room for the Michelin racing tires wrapped around the standard production Viper GTS wheels. Inside, the 2013 SRT Viper GTS-R sports an ALMS approved roll cage and a climate controlled cockpit to keep the drivers safe and cool.

The result of these modifications made to the body, chassis, drivetrain and interior is a Viper GTS-R that has a near perfect weight distribution and a dry weight of just 2,740 pounds. All of that work, plus the expected suspension, braking and interior changes made between road and race use should allow the Viper to get along just fine with the restricted 8.0L V10 engine.

"We stopped racing Viper as an official factory program after the 2000 season," said Gary Johnson, Road Racing Manager for Dodge Motorsports. "Ever since then, Viper enthusiasts have asked us when we will race again. We had no answer until now."

The Chrysler Group left factory backed racing with the Viper after the 2000 American LeMans Series, even though the Dodge Viper GTS-R race program in 1999 and 2000 won 16 of the 18 races entered in those two seasons. The Chrysler Group and their high performance SRT division expect that when the 2013 SRT Viper GTS-R returns to the American LeMans Series GT Class later this year, it will be as popular as it was when it hit the scene in 1999. However, where the competitors at the time may have been caught off guard by the then-new Viper race program – today’s competition in the GT Class is much stouter than what the older Viper races entered. The biggest competition will come from the Corvette ZR1 and BMW E92 race teams that have been the dominant force thus far this season. If SRT wants the new Viper GTS-R to be the same big dog that it was in 99 and 2000 – its biggest competition will likely be the Chevrolet Corvette ZR1 teams. This means that we have a nice crosstown rival set up between America’s top two supercars.

Stay tuned…this is surely going to get good.