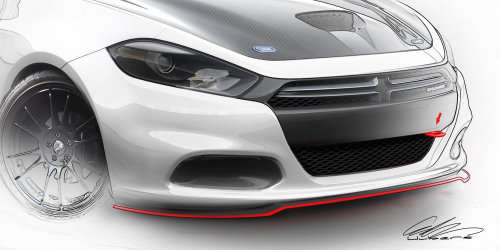 Chrysler teases a handful of their 2012 SEMA Show vehicles

The Chrysler Group routinely has one of the largest and most engaging displays at the SEMA Show each year and with under a month left until the huge automotive convention begins at the Las Vegas Convention Center – the folks from the Mopar division have offered up a very brief glimpse at five of the vehicles that will be in the massive Mopar display.
Advertisement

The Chrysler Group introduced the five images shown in the gallery on the right (click any of the thumbnails for larger images) but little other information was offered to go with these pictures. We know that Chrysler plans to have more than 20 vehicles in their large display that will likely be equipped and surrounded by an array of high performance goodies (and probably some race vehicles) from the Chrysler Group. This being the 75th anniversary of Mopar leads me to expect that this could be an especially exciting year for the Dodge, Chrysler, Jeep, Ram, SRT and Fiat brands heading into the huge show that focuses on high performance and customization.

“At Mopar, we always look forward to the SEMA season,” said Pietro Gorlier, President and CEO of Mopar, Chrysler Group LLC’s service, parts and customer-care brand. “The show is an opportunity for us to inspire owners to customize their vehicles, and it’s the perfect place to showcase our vast portfolio of quality-tested performance parts and accessories.”

The small collection of tightly cropped artists’ renderings of the first five vehicles headed to the 2012 SEMA Mopar include a Fiat 500, a Jeep Wrangler, a 2013 Dodge Charger R/T, a Ram 1500 pickup and a 2013 Dodge Dart that features enough physical changes that it is tough to guess what trimline this might be. Chrysler didn’t offer any information on these sketches but we can make some assumptions of what we might expect at the 2012 SEMA Show.

The Fiat 500 shown has a unique hood with louvers along with some brushed silver trim on both sides of the Fiat nose badge. The fact that this model wears the normal “Fiat” logo tells us that it isn’t a high performance Abarth model but with the recent debut of the Fiat 500 Turbo – I would bet that this is a new Turbo model with some unique dress-up items and possibly more performance from the Mopar catalog.

Next is a 2013 Dodge Charger with a unique hood featuring a front mounted hood scoop but the Dodge badging in the grille suggests that this is more likely a Charger R/T than a high performance SRT8 model. It also looks like it is packing some massive wheels and a firey paint job. This model will likely be used to show off a bunch of Mopar goodies for the top selling 5.7L Hemi-powered Charger sedan.

Next up is a 2013 Jeep Wrangler featuring a Warn winch, and elaborate front grille guard/bumper, some massive off roading tires and a stance that would suggest that this vehicle is equipped with a lift kit. Considering the popularity of the Mopar off-road goodies, I would expect that this show vehicle with take a production Wrangler and turn it into a super-mudder…or something of the sort.

The 2013 Dodge Dart is sure to be a popular model both inside and outside of the Mopar display at the 2012 SEMA Show and the white, black and red Dart shown in the gallery on the right and in the large image at the top of the page is likely just a Dart Turbo powered by the 1.4L Fiat engine with a ton of Mopar items to make it even sportier. Things like the lower front fascia “chin” spoiler and the carbon fiber hood are items that Mopar has shown off on other show models like the Dart GTS 210 Tribute so we can expect that this model will show off production-ready accessories that are available from the Mopar Performance catalog. Hopefully this Dart will also feature some go-fast goodies that are also available from Mopar.

Last and certainly not least is the interesting picture of what appears to be a 2013 Ram 1500 pickup sporting a black paint job and a blue driver’s stripe. While this picture technically shows less than the other drawings, with a power bulge hood that is already available to Ram 1500 owners, this picture could be of a truck that is more than just another SEMA show vehicle. For the last three years, the Mopar division has offered their own customized vehicles based on production Chrysler Group models beginning with the Dodge Challenger in 2010, the Dodge Charger in 2011 and the Chrysler 300C in 2012. That has long been speculation (since before the 2012 Moparized Chrysler 300C was introduced) that Mopar would feature a Ram 1500 as the “Mopar vehicle”. This picture and the show vehicle that goes with it could be offering us a look at the truck that could become the “Mopar 13” as it wears the same black and blue paint scheme, dark wheels and dark headlights that we see on all of the Mopar vehicles from the past three years. That is only speculation and the truck in question could simply be another run of the mill 1-off vehicle that will never be any more than that…or 2012 SEMA show-goers could be the first people to see the Mopar 13 based on the revised 2013 Ram 1500.

Check out the gallery on the right for a closer look at all five of the 2012 SEMA Show Chrysler vehicles introduced thus far and stay tuned to TorqueNews.com for all of your SEMA previews along with first hand coverage of the massive Vegas automotive convention.