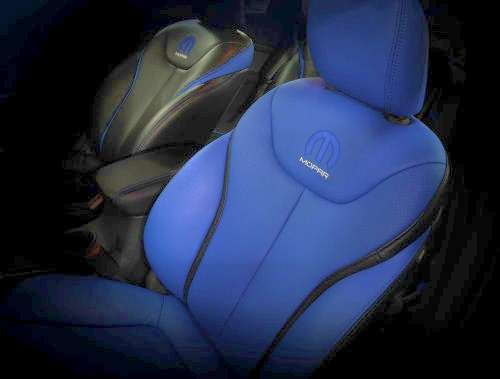 The Chrysler Group posted a picture on their Facebook page teasing the Mopar 13 – a car that I believe it based on the 2013 Dodge Dart that will be unveiled next month at the 2013 Chicago Auto Show.
Advertisement

Chrysler’s aftermarket and performance division has offered “Moparized” vehicles each of the last three years with customized version of the Dodge Challenger R/T (Mopar 10), the Dodge Charger R/T (Mopar 11) and the Chrysler 300C (Mopar 12) sporting simple modifications with a unique black design scheme. The Chrysler Group published a lone picture of the Mopar 13 to peak our interest but they didn’t state on which car this new limited edition model will be based. No information has been offered shy of the fact that the Mopar 13 will be unveiled at next month’s Chicago Auto Show but the company did show off the interior of the next Mopar branded vehicle and from what I can see – I believe this to be the 2013 Dodge Dart.

A first, the image shown on the right side did not reveal much about the Mopar 13 but when we alter the picture in a photo editing program, there are certain features that suggest that the Mopar 13 will be a modified version of the Dodge Dart. From the unedited image, we can clearly see a sporty driver’s seat finished in Mopar Blue Katzkin Leather with black trim while the passenger’s seat is finished in the reverse of that with a predominantly black seat with blue trim while also wearing the Mopar logo. If you look carefully between the clear front seats it looks as though there is another seat further back that refutes the idea that the Mopar 13 would be based on the Fiat 500 Abarth.

However, when we went ahead and adjusted the brightness and contrast of this Mopar 13 teaser, a great deal more comes into sight and what appears is what leads me to believe that this is the Dodge Dart. The center armrest comes into focus along with the seat belt buckles, the cupholders and the parking brake handle – all of which appear to be identical to those found in the 2013 Dodge Dart. The edited image shows that the back seat is indeed further back in the vehicle than we see with the Fiat 500 which supports the idea that the Mopar 13 will be Dart-based.

“This vehicle is the perfect canvas for personalization and customization,” said Pietro Gorlier, President and CEO of Mopar, Chrysler Group LLC’s service, parts and customer-care brand. “We couldn’t wait to get our hands on it and give it the Mopar treatment.”

Since the 2013 Dodge Dart debuted last year, the Mopar division has shown off a huge collection of aftermarket accessories so provided that the Mopar 13 is indeed based on the Dart – the new Moparized compact sedan could be quite different from the standard production models. As we can see on the inside, the Mopar 13 Dart will wear some unique Katzkin leather seats while likely also having a Mopar shift knob and contrasting stitching around the cabin.

On the outside, I would guess that the Dodge Dart based Mopar 13 would be black with some blue trim, some black wheels, some unique badging and maybe some sort of aftermarket fuel door cover. In terms of performance, the Mopar 13 could be based on the Dart Rallye with the 1.4L turbocharged engine but I would bet that Mopar will pick the new Dart GT as the base, adding things like a performance exhaust system, a cold air intake and some mild suspension upgrades to improve the performance of the Moparized Dart sedan.

Needless to say, should more information come to light ahead of the 2013 Chicago Auto Show you will find it here on TorqueNews but we may be waiting until next month to find out if the Mopar 13 is indeed based on the sporty Dodge Dart.