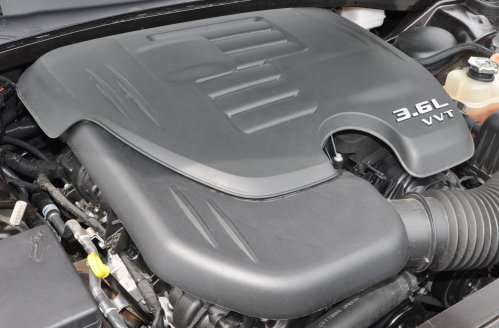 After receiving hundreds of complaints about ticking, stalling, power loss and misfire conditions (thus check engine lights) in select vehicles powered by the popular 3.6L Pentastar V6, the Chrysler Group has begun replacing the cylinder heads on some problematic vehicles – with as many as 7,500 vehicle affected in the US.
Advertisement

According to Automotive News, the Chrysler Group believes that roughly one half of 1% of the vehicles sold in the US with the Pentastar V6 could have an unexplained cylinder head issue with the bank containing the #2 cylinder. This problem can reportedly cause a ticking noise that can escalate to misfire conditions that can cause stalling and a loss of power…although Chrysler points out that it does not render the vehicle inoperable.

It should be noted that this is not a recall but rather, owners of Pentastar powered Chrysler Group vehicles who are experiencing these issues can visit their local dealership where the cylinder heads will be replaced under warranty. The Chrysler Group began replacing the heads under warranty after a handful of complaints were filed with the National Highway Traffic Safety Administration pertaining to the new Pentastar powered Jeep Wrangler SUVs. Unfortunately for Chrysler, this problem isn’t specific to the open aired Jeep as select Dodge Journey, Chrysler Town & Country and Dodge Grand Caravan models have also been found to exhibit this problem. A variation of the 3.6L Pentastar V6 is also used in the Dodge Charger, Dodge Challenger, Dodge Avenger, Dodge Durango, Jeep Grand Cherokee, Chrysler 300, Chrysler 200 and the new Ram 1500 – although none of those vehicles have been mentioned in the statements involving the problematic Pentastar engines.

Chrysler first recognized this problem around six weeks ago, at which point they began manufacturing a replacement cylinder head that is “more robust” along with fitting all newly produced Pentastar engines with these beefier heads. Chrysler has not identified the exact cause of the problem or the specific issue with the cylinder head that is occurring but a company representative has explained that the problems are a culmination of a variety of factors including (but not limited to) the quality of gasoline and the driving situations. Based on that, it sounds like the Pentastar engines are experiencing early detonation that can cause a ticking noise and as time goes on – more problems could creep up due to the incorrect firing of the #2 cylinder. If someone was to put very low quality, low octane gasoline in their Pentastar vehicle and then run the vehicle hard in very hot conditions, there is a good chance that detonation could be the issue especially when the driver keeps running the same gasoline and driving hard. However, the Chrysler Group believes that the variables needed to experience these problems will prevent the problem from occurring in most Pentastar powered vehicles. That being said, running higher quality gasoline could prevent those Pentastar powered vehicles from running into the #2 cylinder issue.

The problem for Chrysler now is that cylinder heads are not something that a company typically builds in excess for mass replacements, like an oil filter or even a headlight lens. Because of that, there is a very high demand for these heartier cylinder heads which the company is having a hard time meeting which has forced some dealerships to hold onto customer vehicles while waiting for replacement parts – all the while having to pay for a rental car while the other is without their own vehicle.

In late July, a source stated that there were approximately 1,300 Chrysler Group vehicles sitting on dealership lots while they waited for the replacement cylinder heads with an average of 300 new vehicles arriving at dealerships each week. The average number of reported cylinder head issues has now increased to around 500 per week. Luckily, the Chrysler Group sent enough replacement cylinder heads to dealerships around the country to address some 3,000 vehicles but with as many as 7,500 vehicles affected around the country – those owners who have not experienced the problem thus far could be waiting for parts once they do.