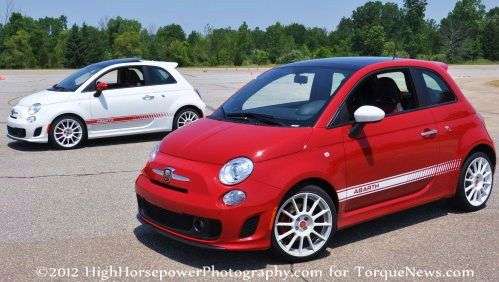 June 2012 was another great month for the Chrysler Group as, with a year over year increase of 20% for the company as all five of the company automaker brands posted gains – including two of the top five biggest improvements by a single brand in Fiat and Chrysler.
Advertisement

The Fiat brand was the top performer for the Chrysler Group in June 2012 in terms of growth and with an improvement of 122% over the same month last year – Fiat was also the top brand in the entire US auto industry in terms of growth. Fiat sold 4,004 examples of their compact 500 coupe and convertible last month compared to just 1,803 units one year ago. With 4,004 Fiat 500 models sold last month, the Fiat brand beat Porsche, Land Rover, Suzuki, Jaguar and Smart in terms of sales volume. This is especially impressive considering that Fiat only sells three variants of a single car (500 coupe, convertible, and Abarth). Things could continue to improve for Fiat in the US with more variants of the 500 expected to arrive over the next year. On the year, Fiat has sold 319% more 500 models than they did through the first half of 2011 with 20,706 units sold.

The Jeep brand was next in line with an increase of 23% compared to the June 2011. The growth leader among the Jeep brand was the Liberty with an improvement of 50%, followed by the Grand Cherokee at 39% and the Wrangler with a 28% increase. In terms of sales volume, the tried and true Jeep Wrangler was the top model with 14,461 units sold while the Grand Cherokee was second with 12,506 units sold and the Liberty was third with 7,892 examples of the midsized SUV sold. With 44,519 sport utility vehicles sold in June, Jeep was the bestselling brand for the Chrysler Group.

The all-truck Ram brand was next in line in terms of sales growth in June 2012 with an improvement of 11% compared to June 2011. This growth was due almost entirely to the success of the Ram pickup family, which moved 23,951 trucks for an increase of 12%. The Dakota continued its post-production march to automotive history in moving just 18 units (down 98%) while the new Ram C/V minivan moved 1,141 units (there is no increase rate as the Ram C/V was not sold at this time last year). On the year, the Ram pickup family has moved a total of 138,581 trucks for an increase of 24%. The old Dakota has moved 459 units (down 94%) and the new Ram C/V has sold a total of 3,443 work rated minivans.

The Dodge brand was the worst brand from the Chrysler Group in terms of growth an increase of only 2% but a 2% gain is better than a 2% loss. Dodge was led in growth by the midsized Avenger sedan with a jump of 68% followed by the Journey with an increase of 49%. The Dodge Charger and Dodge Challenger tied for third place in terms of growth among the Dodge brand was equal increases of 18%. The only current Dodge vehicle to post negative growth in June 2012 was the Durango, which dropped by 43%. In terms of sales volume, the Caravan lineup was the top dog with 10,901 minivans sold. The aforementioned Avenger sedan was second in sales with 9,404 units sold and the Charger came in third with 8,532 full sized sport sedans sold.

The most important number out of all of these figures is the 202 2013 Dodge Darts sold in June 2012. The compact class is arguably the most vital in the US auto industry but the Chrysler Group hasn’t had a legitimate player in that segment for years. That is expected to change when the new Dodge Dart hits showrooms in full force later this month but with 202 units sold – the Dart has officially begun its attack of the American C Segment.