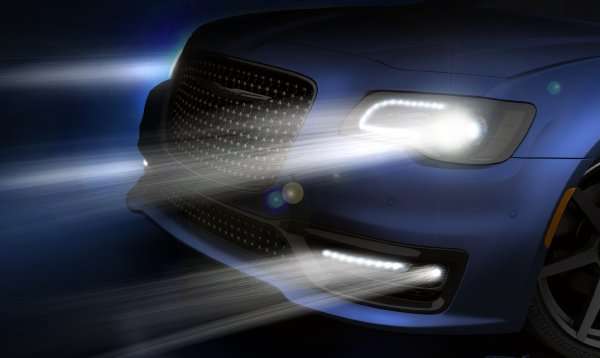 This past Friday, the Chrysler Group teased a few of the vehicles that they are bringing to SEMA and while we were enamored with the prospect of an all-wheel drive Dodge Challenger – there were also teasers of what appear to be the Chrysler 300, the Ram 1500 Rebel and a Fiat 500X which will join the AWD muscle car in the huge Mopar display.
Advertisement

When the Chrysler Group offered up their first teaser images of vehicles coming to the 2015 SEMA Show in Las Vegas, the American performance world was set ablaze with the prospect of an all-wheel drive Dodge Challenger. We are only guessing that the Challenger GT AWD is indeed a muscle car that will spin all four tires, but that was enough to draw all of our attention last week.

However, that mysterious Challenger wasn’t the only vehicle teased last week. Included with the image of the GT AWD muscle car were a shot of a Chrysler 300 front end, a shot of what looks to be the side of a Fiat 500X and what appears to be a higher riding version of the new Ram Rebel. Today, we bring you a closer look at each of these teaser images and what we might expect when the SEMA Show opens next week.

The Chrysler 300
The first image, as shown above, shows a new Chrysler 300 which has been customized by the folks at Mopar. This Chrysler sedan appears to have a new upper grille, large wheels and perhaps a unique lower front fascia with some sharper angles than any of the production 300 front ends. It looks like this car is finished in a blue exterior paint and everything else – from the grille inserts to the lighting bezels to the wheels – appears to be finished in black or very dark grey. The Ram Rebel
Next up, we have what appears to be a Ram Rebel. This package has recently debuted on the Ram 1500 as the most off-road capable half ton Ram ever, but it looks like the Rebel headed to SEMA will take that to the next level. This Ram image appears to have some huge beadlock wheels, which I would guess are holding onto some sturdy off-road ready tires. Also, this Rebel appears to sit a bit higher than the standard Ram Rebel at the local dealership while the wheel opening flares are a bit larger and more aggressive than what comes on the production truck.

The Fiat 500X
Finally, we have a shadowy image of what I would guess is the new Fiat 500X (below), based on what little we can see – and the familiar “X” logo on the vehicle and on the parachute in the background. It is hard to tell what might be done to this sporty little Fiat compact SUV, but it looks like it has unique wheels and a unique stripe package.

In case you missed our piece on the Dodge Challenger GT AWD, click here for the information on that SEMA Show-bound muscle car.