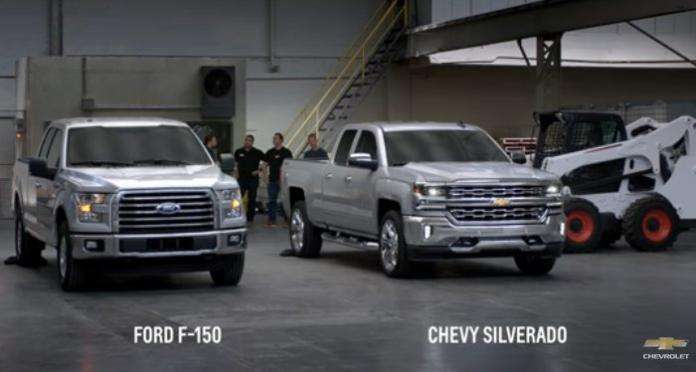 It has been just over a year since Chevrolet rolled out their Silverado ads featuring a new Ford F150 bed being damaged by dropping various objects onto the aluminum surface and in that year, Ford sales have risen while Silverado sales have dropped – showing that the automotive consumer may not favor negative advertising.
Advertisement

Back in June 2016, Chevrolet rolled out a series of commercial for the Silverado which featured their truck parked next to a new Ford F150. In these commercials, “real people” looked on as a load of paver stones was dropped from a frontloader into the bed of each truck. The Silverado’s steel bed held up to the bricks without only scuffs and dents, while the bed of the F150 saw more severe damage. Of course, the “real people” reacted with great surprise at this and when a large, steel toolbox pushed over the edge of the bedside did significantly more damage to the F150’s aluminum bed, the onlookers were equally stunned.

The goal of these commercials were to highlight the “softer” aluminum used in the new Ford F150 body by showing that the Chevrolet Silverado’s steel bed is notably stronger in these situations.

These ads quickly spread across the internet, with Chevy fans poking fun at the Ford community by reposting the commercials of the F150 bed being damaged in the side by side tests. For those critics of the switch to aluminum, these ads were the perfect proof of an inferior material, but for the most part, the commercials were received as being farfetched. In speaking with people throughout the industry, these commercials provided GM fans with some ammo in an online dispute about whose truck is better, but it didn’t have any impact on the sales chart.

In fact, since GM rolled out these ads, Silverado sales have decreased each quarter while Ford F-Series sales have steadily risen over each 3-month period. While this stark difference in quarter sales cannot be attributed solely to the negative advertising, the direction of F150 sales combined with the direction of Silverado sales suggests that these ads definitely did not have the desired effect.

Truck Sales in the Last 12 Months
During the 3-month period immediately following the release of the Chevrolet Silverado ads featuring the new Ford F150, Ford led in sales units and market share with 203,540 units sold accounting for 35.8% of the segment. During that same 3-month period (June-Aug 2016), the Silverado moved 156,186 units for a 27.5% market share.

More importantly, during the past 3-month period, sales of the Ram Truck lineup has risen past the Silverado, with 134,555 trucks sold accounting for a market share of 23%.

More Negative Advertising in an Election Year
When the Chevrolet Silverado ads showing the Ford F150 bed being battered in a few unlikely situations first hit the airwaves, they did so amidst one of the most vicious presidential campaigns ever. Every television channel was littered with commercials with one candidate trash-talking another, and it is no secret that these negative campaign advertisements are unappealing to many viewers.

While TV viewers were inundated with commercials showing one politician bad-mouthing another, along came a Chevrolet Silverado ad where they are effectively bad-mouth their competition in a similar fashion. Like political commercials, those people who already believe in the message of the commercial enjoy these negative truck commercials, but to everyone else, they are quite off-putting. Because of this, these commercials may have had the wrong impact on truck shoppers who are not brand loyal, driving them away with a negative advertisement at a point in time where people are buried in negative advertisements rather than highlighting the fact that their bed material is stronger in certain situations. In another year where these ads weren't mixed in with political campaign ads, the information may have been better received, but in the summer and fall of 2016 - these were a drop of water in a sea of negative advertising.

Again, it isn’t fair to say that the negative Chevrolet ads showing the Ford F150 bed being beaten up in relatively unusual situations played any specific role in the sales trends in the full size truck segment over the past year. However, with the increase in Ford sales combined with the decline in Chevy sales to the point where Ram has surpassed the Silverado, it is clear that the negative advertising campaign with the aluminum bodied Ford truck didn’t have any impact on the segment.

Image captured from the Chevrolet Commercial above.

Steve wrote on June 12, 2017 - 1:29pm Permalink
If anything the Chevy adds pointed out the fact to truck buyers that probably would have missed the F150 is Aluminum. As someone that rode in trucks as a child and own one now, I could not recall even one of their "use cases" occurring. However having worked with Chevy's, GMC's, Dodge Ram's, Isuzu, Nissan trucks from 50's era pick-ups on - they all rust. Pointing out this a Ford won't rust won't was probably not the smartest idea for Chevy. Another draw back; it also assumes that truck buyers are dumb - I have a college degree know very well the properties of metals, I don't need the shortcomings of Aluminum pointed out to me. Any male that prides themselves on being a know it all of material things(all of us) knows Aluminum is not as strong as Steel - no one needed to point that out. I would never think of owning a truck w/o a bed liner simply having a scratch & dent free bed at resale would more than pay for it. Among truck buyers the question isn't should I install a bed liner it's "what kind did you choose"? Anyone that says "none" is silently excluded as being a simpleton or a fool. If that isn't the way it is I'm not a college educated hillbilly - I assure you I am.