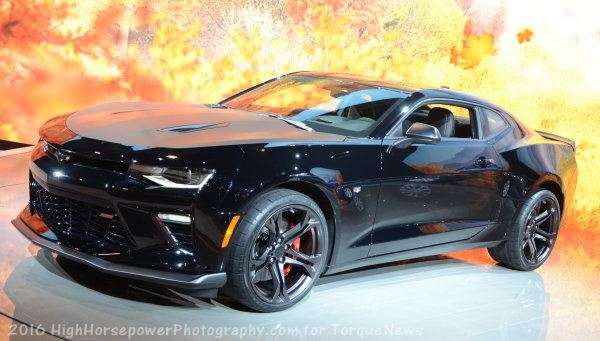 The Chevrolet Camaro posted its 3rd best sales volume of 2016 in September and when combined with a gigantic drop in Ford Mustang sales, the new GM muscle car finally outsold both of the crosstown rivals – ending the 22-month winning streak by the Mustang.
Advertisement

The last time that the Chevrolet Camaro outsold the Ford Mustang in monthly sales was back in October of 2014, when Ford managed to sell just 4,565 examples of the Mustang in the month before the all-new 2015 models began reaching dealerships. In the 22 months since October 2014, the Ford Mustang has beaten the Camaro and the Dodge Challenger in monthly sales, but in September 2016, the Mustang had its worst sales month since the new generation was introduced two years ago. As a result, the Mustang slipped to 2nd place in the muscle car sales race for September, allowing the Camaro to break the 22-month streak and to prevent the Mustang from posting another sales shutout in 2016.

September 2016 Muscle Car Sales
In September 2016, General Motors sold 6,577 examples of the Chevrolet Camaro (up 25.4% from last September), allowing them to claim the monthly muscle car sales title. The Ford Mustang was 2nd in the segment with 6,429 units sold and the Dodge Challenger was 3rd with 5,698 units sold last month.

The Camaro’s sales total for September was the 3rd best of the year for the Chevy muscle car while also being one of the better years for the 6th generation car in terms of year over year gains, but the surprisingly poor sales of the Ford Mustang plays just as big of a role in the Camaro claiming the monthly title. With just 6,429 units sold, September was the worst sales month for the newest generation Mustang since it was introduced in late 2014. Mustang sales were down 32% from the same month last year and while we can expect some decline in Ford muscle car sales as the car moves further from being “brand new”, but the sudden drop was not something that I expected. It will be interesting to see how the Mustang rebounds in October.

Finally, the Dodge Challenger was in its usual 3rd place spot in the segment sales race, but with 5,698 units sold, the brawny Mopar muscle car wasn’t far behind the cross-town rivals. The Challenger improved by 19% last month (compared to Sept 2015) and with the new Challenger TA and Charger Daytona models set to arrive soon – we could see another small spike in Dodge muscle car sales over the next few months.

The Annual Race is Still All Ford
While the Chevrolet Camaro managed to beat the Ford Mustang in September, breaking the 22-month streak and preventing a second-straight year of being shutout in the monthly sales race, the Mustang still has an insurmountable lead in the annual sales race.

After September, Ford has sold 87,258 Mustangs in the US while General Motors has sold only 54,535 Chevrolet Camaros – a difference of 32,723 units. Ford could have stopped selling Mustangs on October 1st and for the Camaro to beat it, Chevy would have to sell around 11,000 Camaros a month in October, November and December to take the lead. General Motors has never sold more than 11,000 Camaros in a month during the modern era (2009-present), so it is pretty much impossible for the Camaro to win the 2016 muscle car sales title.

Realistically, the Camaro is still in danger of falling to 3rd in the annual race if sales should slump in the next few months, especially if the Dodge Challenger continues to grow. Technically, the entire muscle car segment is down this year, but the Challenger has routinely been the strongest of the three in terms of month to month growth. If the introduction of the new Challenger T/A leads to s spike in sales – Dodge could sneak into the 2nd place spot behind the Mustang.

April wrote on October 3, 2016 - 10:55pm Permalink
See when prices are close to the same with discounts, The Camaro sales are better. Better car 100% Turbo 4 (base) Is faster then eco boost mid car. SS better than GT. Chevy cuts out most rental car sales. The last great Mustang was in 1973. 20 years before I was born .lol Steve of course will hate on sales. I really don't think he owns a Mustang. Maybe a nice Honda I would think lol
Axeman wrote on October 4, 2016 - 4:13am Permalink
Stop comparing apples to oranges. Cameron's are not for export sale. Only sold in USA.
Tom Steel wrote on October 4, 2016 - 11:02am Permalink
Love when all the Chevy boys get their vag all hurt and in a bind... Try driving a Mustang before you cry about how much better a Camano is... You won't be posting stupid responses so much Hysterical.
April wrote on October 4, 2016 - 5:05pm Permalink
Sorry fanboy. My boyfriend has a 2014 mustang gt. It sucks just like all mustangs. I put my head down when I'm in it cause so ashamed.
Aaron wrote on October 2, 2017 - 10:27am Permalink
And with that ignorant comment filled with no facts as to why the mustang sucks is why know one is really listening to you. If I was your boyfriend ( thank gawd I'm not ) I would hang my head in shame if you where in my car no matter what it was.
Steve Uhlmeyer wrote on October 16, 2016 - 1:11pm Permalink
I'm lovin my ecoboost, in track mode the little engine that could rips. Ford performance pack will make it lift off like Bob Glidden never thought possible.
April wrote on October 18, 2016 - 7:21pm Permalink
Steve, The ecoboost and turbo4 Camaro are the future. Now that $700 can boost the ecoboost to almost equal torque, It makes the extra money for the GT worthless. If you break the law speeding then sure go ahead and get a SS or GT. But in real world safe legal driving, 0-60 is fun. And that's where the turbo on both shines. Plus Ford and Chevy put a v8 so expensive it's almost ludicruis to get one.