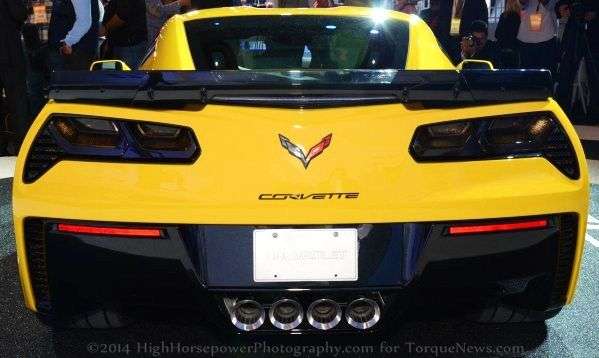 Chevrolet Corvette Sales Through April Up 200%

When the new C7 Chevrolet Corvette Stingray made its world debut at the 2013 North American International Auto Show in Detroit, many of the loud mouthed, old school Corvette owners cried foul at the new look – insisting that this car wouldn’t succeed due to the unconventional look – but after the first four months of 2014 the new Corvette is outselling the previous model by almost 200%.
Advertisement

When the 2014 Chevrolet Corvette Stingray Coupe was introduced with a stunning, angular new look that included taillights that weren’t round for the first time ever, the old school car guys were quick to take to the internet to complain about how much they hated the new look (after their grandkids showed them how to turn the computer on, that is). They insisted that the industry wouldn’t accept a Corvette that looked like this and that a Corvette with rectangular headlights was doomed to fail. Well, much in the same way that these older car guys are unable to answer their cell phone in a timely fashion, they were unable to accurately predict the early success of the C7 Stingray.

As soon as the order banks opened late in 2013, buyers lined up to buy the new 2014 Chevrolet Corvette Stingray in such massive quantities that the waiting list for Stingrays with the Z51 package quickly grew to the point where buyers might have been waiting almost a year to take delivery. In October 2013 – the first full month of C7 availability – GM recorded almost 4,000 units sold, followed by 2,500 units in November and another 3,000 in December. For comparison, GM sold 1,167 Corvettes in October 2012, 1,104 in November 2012 and 1,291 in December 2012 so when you consider the fact that GM sold more Corvettes in October 2013 than they did in the final three months of 2012, it becomes clear just how popular the new Stingray is throughout the US market.

Those early sales weren’t just a fluke, as the sales numbers for the new Chevrolet Corvette Stingray have remained very strong through the first four months of 2014. Even in a particularly harsh winter, GM sold 2,261 Corvettes in January (compared to just 908 the year before) and the numbers have increased in each of the first four months. In February, GM delivered 2,438 Corvettes compared to 980 a year earlier followed by 3,480 in March and 3,514 in April after the company sold “only” 1,053 in March 2013 and 974 in April 2013. Overall, GM has sold 11,693 Corvettes in the first four months of 2014 while they sold just 3,915 Corvettes during that same time period in 2013. That translates to an increase of 198.7% in the C7’s first full year of sales.

Now, it should be noted that the introduction of the C7 Corvette Stingray last January did have a negative impact on sales of the then-current C6 Corvette. While the Corvette had been averaging roughly 1,400 units through 2012 (before the C7 was introduced), those numbers fell into the range of 900-1,000 units once the new model made its big debut. This is due to people deciding to hold off on buying a C6 in the early portion of 2013 as they waited for their chance to purchase a new C7. However, the numbers didn’t drop all that significantly so those folks who were waiting for a 2014 model didn’t skew the numbers all that much. Even compared to the Corvette sales numbers a year or more before the debut of the C7, the numbers for the newest Corvette are very, very strong and we can only expect those numbers to continue to improve as the heat of summer spreads across the entire United States.

While the old guys who still remember when you could buy a brand new Corvette for $5,500 might hate the look of the new Stingray – the consumer market has made it very clear that the design of the C7 was the big hit that GM was hoping for when designing the oldest sports car in the American auto industry.

Parks McCants wrote on May 2, 2014 - 3:51pm Permalink
So Patrick, in your most humble and qualified opinion, is this gain in sales an economic recovery indicator, what's driving the sales? Man, the rear deck is ugly on this monster...
Rick wrote on May 3, 2014 - 7:32pm Permalink
What a nasty bunch of comments by this writer. Must be nice where can have a job attacking people who don't like the horrid back of this Vette. The comments about being to old/stupid to turn on a computer are down right foul. You need another line of work.
Patrick Rall wrote on May 4, 2014 - 9:15am Permalink
The truth is the truth Rick. It is the old school Corvette guys who cant accept change so they hate the back end and that same generation happens to be particularly non-computer savvy. Nothing nasty about the truth.
Patrick Rall wrote on May 3, 2014 - 12:32pm Permalink
The new car itself is driving sales. While all of the babyboomers who have a C5 and C6 hate the C7, people looking to buy a sports car are lining up (literally) to buy a C7. It is the best performing Corvette ever but more importantly, it will outperform quite a few far more expensive sports cars. It is hard to call a car that ranges in price from $55-75k a bargain, but as sports cars go, the new Stingray is a bargain.
Paul wrote on May 3, 2014 - 3:22pm Permalink
I am an ardent Corvette fan, having owned two Corvettes in the past 5 years. I currently own a pristine C5 Z06 in Torch Red that puts a big smile on my face everytime I take it out of the garage. The C7 is a beautiful car and worthy of the Corvette and Sting Ray name. Next to the C5, it is the most revelutionary and game changing Corvette in 30 years! The C5 saved the Corvette line after the dismal performance C3s of the seventies and eighties, and the lack luster C4. The C7 is launching a new hey day for the Corvette name and line up. I have no desire to part with my C5 Z06, but my next Vette will be a C7. Kind of holding out for a few years and will probably go for the new Z06 when I pull the trigger. Call me old school, but I fully endorce the C7. Home run Chevrolet, home run!
Dave Blades wrote on May 5, 2014 - 6:26pm Permalink
It is A popular vehicle.Patrick you sound like your in the loop.There are many of us that have ordered the new stingray.Orders are being filled.Do you have an idea how many have ordered the 2014 stingray but probably will not receive the car because of the cutoff,going into 2015 model year?