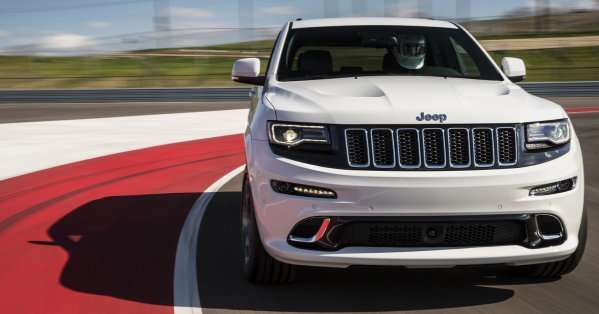 Since the supercharger Hellcat Hemi was introduced for the 2015 Dodge Challenger SRT, we have talked about the likelihood of seeing that monster motor in the Dodge Charger, the Chrysler 300C and the Dodge Viper, but we have failed to consider the Jeep Grand Cherokee SRT – which would be the most powerful production SUV in the world.
Advertisement

Unfortunately, we don’t know exactly how much the 2015 Dodge Challenger SRT Hellcat will make with its incredible 6.2L supercharged Hemi V8, but we know that it will be at least 600 horsepower and at least 575lb-ft of torque. So long as the company hits at least those prescribed numbers, the 2015 Challenger SRT Hellcat will be one of the most powerful American cars of all time and the most powerful V8-powered Chrysler product ever. So far, Chrysler has only discussed using the Hellcat in the Challenger, but I find it hard to believe that they won’t rely on an awesome engine like that in their other SRT products. Installing it in the closely related Charger seems like a no brainer and that would make the Charger SRT the most powerful sedan sold in America, but installing that blown Hemi in the future Grand Cherokee SRT would also allow them to boast of having the most powerful production sport utility vehicle sold in the world – although it may need more than those “at least” numbers to hold off some upcoming competitors.

A Look at the Competition
Were the Chrysler Group to install the 6.2L Hellcat Hemi V8 in a future Jeep Grand Cherokee SRT, it would likely be for the 2016 or 2016 model year since the 2015 model year is pretty much here even though we are only 6 months into 2014. If the Grand Cherokee SRT Hellcat arrived for 2016 it would have five major competitors in terms of the most powerful production SUVs sold in America – the Porsche Cayenne Turbo S, the BMW X6M, the Mercedes Benz ML63 AMG, the Range Rover Sport Supercharged and the Mercedes Benz G63 AMG. I should point out that there are numbers for the 2014 model year so within the next three years, these high performance SUVs are very likely to see some increases of their own…but they would all need significant increases to reach 600 horsepower.

The most formidable foe for the Jeep Grand Cherokee SRT Hellcat would be the BMW X6M, which packs 555 horsepower and 500lb-ft of torque while the Porsche Cayenne Turbo S is a close second with 550 horsepower and 553lb-ft of torque. Provided that the Hellcat Jeep had 600hp and 575lb-ft of torque, it would have a pretty substantial advantage over both of those German beasts. The Mercedes Benz G63 AMG is also up there in the numbers with 536 horsepower and 560lb-ft of torque – making it the torquey-ist of the bunch, but it would still fall short of the Hellcat in current form. It should also be noted that while the X6M and the Cayenne Turbo S are both strong competitors for the Grand Cherokee SRT, the G63 AMG doesn’t offer nearly the same on-road performance as the Jeep.

As for the Mercedes Benz ML63 AMG and the Range Rover Sport Supercharged, those are among the most powerful SUVs in the world right now, but their current performance levels are more closely matched to the current Jeep SRT with the 392 cubic inch Hemi.

The Lamborghini Urus will Pose the Biggest Challenge
The toughest competitor for the Hellcat powered Jeep Grand Cherokee would be the 2017 Lamborghini Urus, which is expected to pack a monster twin turbo Audi V8 that will likely deliver somewhere in the area of 600 horsepower and probably just as much torque. The Urus may also have a hybrid derivative that will not only increase the torque output, but it will make it a monster from a stop with the initial torque of the electric drive system. This vehicle would by far be the biggest challenge for the Grand Cherokee SRT Hellcat – unless those “at least” numbers from Chrysler are on the low end of things. Should the Challenger come out with say, 625 horsepower and 600lb-ft of torque, the high performance Jeep could knock off the Lambo SUV.

As a side note, the drivetrain from the Lamborghini Urus is expected to power future Porsche and Audi models, but I would expect that the Lambo will have the most powerful version of the shared drivetrain. Should the Lamborghini numbers reach past 600 horsepower, it could overpower the Jeep and leave the Hellcat to battle the slightly less powerful Porsche Cayenne and Audi Q7.

The Hellcat Jeep Would Be a Relative Bargain
Even if the Jeep Grand Cherokee SRT Hellcat isn’t THE most powerful SUV sold in America, it will still be among the most powerful and it would likely also be the least expensive of the group. The current SRT Jeep starts at $64,000 and if the Hellcat adds on an extra $10,000, you have a 600+ horsepower SUV that starts around $75,000. For comparison, the 420 horsepower Porsche Cayenne S starts at $83,300 while the Turbo S that we discussed above starts at $146,000. The Range Rover Sport Supercharged model is the most affordable in the current group with a price of $79,000 while the BMW that is the most powerful in the current class starts just south of $100k. Even if the Hellcat added $15,000 to the price, the 600 horsepower Jeep would just then be competitive with the supercharged Range Rover that “only” has 510 horsepower.

Unfortunately, this is all speculation and there is no guarantee that the Hellcat Hemi will ever end up in the Jeep Grand Cherokee. However, with the Grand Cherokee being one of the SRT lineup’s bestselling models, I fully believe that there will be a Hellcat Jeep – it just might be a few years out. When it does arrive, I expect that it will be in the top five most powerful SUVs sold in the US…if not the most powerful.