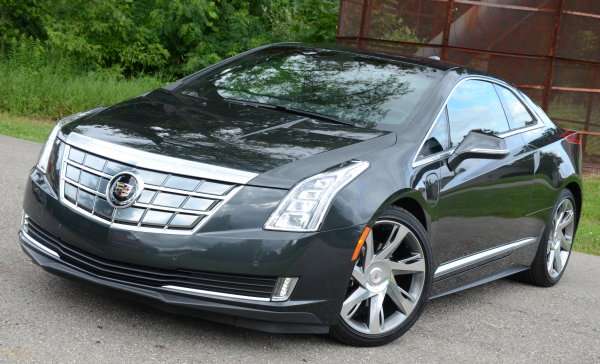 The Cadillac ELR is Headed for Extinction and I’m Bummin'

The folks at Automotive News announced yesterday that the extended range Cadillac ELR – essentially the luxury coupe version of the Chevrolet Volt – will not continue on into a next generation and with the ELR being one of my favorite vehicles on the market today – I am sad to hear that the beautiful electric Caddy coupe is headed for the automotive graveyard.
Advertisement

Automotive News first reported last summer that the Cadillac ELR was likely to come to an end after just one generation, likely continuing on through the end of the 2018 model year. Cadillac boss Johan de Nysschen has since confirmed to AN that there is definitely no successor planned for the ELR and that it will only be sold while there is still reasonable interest in the electric Cadillac. Unfortunately, it can be argued now that there is not reasonable interest – so my beloved Caddy coupe could be gone sooner than 2018.

Big Price, Small Demand
The Cadillac ELR is, in my opinion and the opinion of many others, one of the best looking cars in the American auto industry. On the outside, the ELR has striking, sexy lines and on the inside, the ELR packs premium luxury amenities everywhere you look. The problem with the ELR is that when you combine all of those interior goodies with the Voltec drivetrain – the price goes through the roof.

When the ELR was first introduced for the 2014 model year, it was saddled with a price of $75,995, making it the most expensive “base model” of any vehicle sold by General Motors. Sure, you can load up any other Cadillac and even some trucks to price out higher than the ELR, but in terms of barebones pricing – there is no GM vehicle that costs more than the Cadillac ELR.

Maybe GM figured that if people would pay close to $40,000 for the Chevy Volt, they would pay an extra $35,000 for less doors, a more styling exterior and a state of the art cockpit. Unfortunately, that has proved to not be the case, as the best year of sales for the ELR was the first year, when just 1,310 cars were sold. For 2015, that figure dropped to just 1,024 – making the ELR the worst selling vehicle in the entire company lineup shy of the fleet-only Captiva Sport.

With numbers like that, it is hard to question why General Motors won’t bother putting the time and money into a next generation car.

Bigger Problems than Price
While many people look at the $76k price tag of the Cadillac ELR and use that as the key reason for the demise of the sexy plugin luxury coupe, the fact that it is an electric vehicle may have also played a part in the lack of interest from consumers.

During the time I was driving, testing and loving the Cadillac ELR, I got a great many inquiries on the car from friends, neighbors and people out in public. They were drawn in by the stunning exterior and when they sat in the plush cabin, they only had good things to say.

Then I started the car up, at which point many of them frowned and asked “is this an electric car?”

I would then explain to them that the Cadillac ELR was an extended range electric vehicle, using an electric drivetrain to move the car while a gasoline engine provides juice for long drives. Unfortunately, on hearing that it was electric, most people quickly dismissed it as something that they would never own.

Had the Cadillac ELR been powered by the same 3.6L V6 that motivates most other Cadillac and GM vehicles, it would have likely cost far less and sold far better – but that would have eliminated the key electric aspect. The ELR was designed to help the company make money on their Voltec drivetrain architecture, but it seems that GM got a little too eager with the pricing and as a result, the ELR will soon be gone.

Arguably one of the most attractive cars Cadillac built in this era, the ELR is a victim of low interest in the electric vehicle segment among those folks who can afford a high priced car.

John Goreham wrote on February 3, 2016 - 7:52pm Permalink
IMHO the best looking production coupe from GM in a generation.
mike w wrote on February 3, 2016 - 8:35pm Permalink
We just got a 2016 Volt LT. at $35K for a car with few options on it I can understand why GM sells only a 1000 of these cars a month. Had the ELR been priced a little closer to the Volt I would have shopped it against the Volt. The price on the ELR killed it for us.
Charlotte Omoto wrote on February 6, 2016 - 5:21pm Permalink
"ELR is a victim of low interest in the electric vehicle segment among those folks who can afford a high priced car"? Or low interest in electric vehicles among those folks who are interested in Cadillacs or for that matter BMW. Otherwise how to explain increased sales of Tesla?
Tony Vecchio wrote on April 24, 2016 - 10:39pm Permalink
I bought one of the first ELRs built, #274. I've had it two years now and love driving it every day. It's the most beautiful car General Motors has ever built in my opinion. It's the quietest, smoothest riding, most luxurious car I've ever owned, and I've had two Mercedes before the ELR. The fit and finish are perfect, and there's not the slitest squeek or rattle. It's a shame Cadillac hasent sold enough ELRS to keep the production going. But I love mine and will continue to enjoy it for many many years.