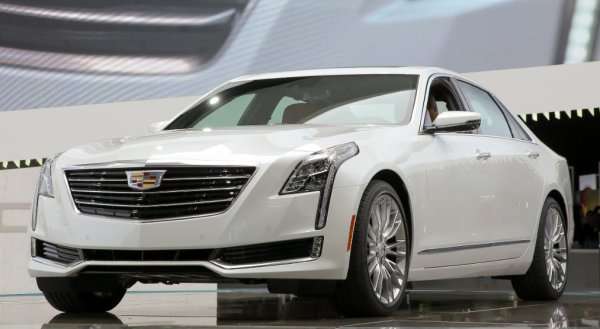 General Motors has used the Shanghai, China Motor Show to introduce the new Cadillac CT6 Plug-In Hybrid with 335 horsepower, 432lb-ft of torque and a strong possibility of being offered in the United States.
Advertisement

Since the new Cadillac CT6 was introduced at the New York Auto Show, the focus of our attention has been on the powerful engine lineup that will be topped (for now) by a new twin turbo V6 with 400 horsepower and 400lb-ft of torque. (Click here for a closer look at the full details of the new CT6.) However, with the opening of the Shanghai Motor Show in China, GM has shown off a very new premium luxury sedan – one which will use a similar plug-in hybrid electric drivetrain to that found in the Chevy Volt and the Cadillac ELR.

"The first-ever CT6 is a technological showcase throughout, making it an ideal platform for Cadillac to offer its first plug-in hybrid," said Cadillac President Johan de Nysschen. "In the CT6, Cadillac presents a new formula for prestige luxury. The advanced Plug-In Hybrid system is a key addition, providing a combination of exceptional fuel economy, crisp acceleration and strong electric-driving range."

The CT6 Plug-In Hybrid
While the new Cadillac CT6 PHEV is vastly different from the Cadillac ELR or the Chevy Volt, a fair deal of the technology from those two GM EVs has been used on the new CT6 PHEV. First, the 18.4kWh lithium ion battery pack from “other GM plug-in vehicles” is mounted between the rear seat and the trunk of the CT6, while the company’s “proven active thermal control system” helps to keep the batteries at an ideal temperature – this prolonging the life of the electric drivetrain.

CT6 Offers Bigger Performance
The new Cadillac CT6 differs primarily from the Cadillac ELC and the Chevy Volt in the fact that it is rear wheel drive while those smaller EVs already on sale are front drive. However, that isn’t the only difference, as it sounds like the CT6 will have a much more performance oriented design. The key component in the CT6 performance push is the 2.0L turbocharged engine that has been coupled to the Electric Variable Transmission. The Volt and ELR in the US have only used a 1.4L and 1.5L gasoline engine, so the larger and more powerful 2.0L mill will afford the Cadillac CT6 far better performance than the smaller, front wheel drive relatives.

The exact performance numbers have been broken down, but General Motors is promising that the Cadillac CT6 PHEV will offer 335 horsepower and 432lb-ft of torque. Compared to the output of the 2016 Cadillac ELR at 233 horsepower and 373lb-ft of torque, the CT6 packs 102 more ponies and 59 more lb-ft of twist.

No Range Numbers Yet
General Motors has not announced any range numbers for the upcoming Cadillac CT6 Plug-in Hybrid Electric sedan, but you would think that with so many of the electric components being shared with the smaller Chevy Volt, the CT6 electric-only range numbers should be slightly worse than those of the Volt.

GM has stated won’t get official range estimates until we are closer to the US launch – which doesn’t come with a date, but it does confirm that it is coming to the USA.

mike w wrote on April 21, 2015 - 8:32pm Permalink
Sounds great. Still wondering about the price. Calls for GM to use the "Volt-tech" in other GM cars are finally being answered.