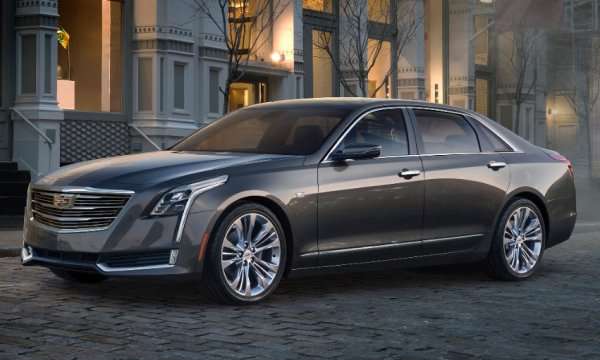 After months of speculation, the gorgeous new Cadillac CT6 has made its grand debut at the 2015 New York International Auto Show, ushering in the new naming scheme, a new engine and a new top of the line luxury sedan to the GM family.
Advertisement

The new 2016 Cadillac CT6 is pretty much exactly what we had expected. It is a large luxury sedan chock full of high end technology with an exterior design that is an evolution of the current Cadillac models and it is available with either rear wheel drive or all-wheel drive, depending on the engine chosen. It has an impressive range of engines that should satisfy the most prospective buyers with a nice mix of efficiency and performance. These are all features that anyone could have predicted and as we expected, the new CT6 looks incredible.

What we didn’t expect was a new all-wheel steering system coupled with the advanced all-wheel drive setup and a curb weight that is expected to begin around 3,700lbs – making the 2016 Cadillac CT6 considerably lighter than the key competitors in the large luxury sedan segment.

The Lightest Luxury Heavy Hitter
When the 2016 Cadillac CT6 arrives late this year, it will enter a segment that has been comfortably dominated by European automakers for years. The large luxury sedan world has revolved around the likes of the BMW 7 Series, the Audi A8 and the Lexus LS for years while Cadillac has focused its attention on the smaller luxury segments. Like these three foreign class leaders, the new CT6 will have incredible levels of luxury inside and a handful of powerful-yet-efficient engines, but there is one area where the new Cadillac will shine over the competition – and that one area will lead to advantages elsewhere.

According to General Motors, the new Cadillac CT6 will have a curb weight starting around 3,700lbs. There is no information as to what features that weight includes, but even if this is in the CT6’s lightest form – presumably with rear wheel drive, the base engine and the fewest features possible – the new Caddy is much lighter than the competition. The Lexus LS sedan curb weight starts around 4,200lbs while both the Audi A8 and the BMW 7 Series start in the mid-4,300 range. In other words, the CT6 appears to be around 500-600 pounds less than the comparable models from Lexus, BMW and Audi.

This weight advantage should translate into a Cadillac CT6 that is more agile, more fuel efficient and better performing than the competition.

The base model engine is a turbocharged 2.0L 4-cylinder that will deliver around 265 horsepower to the rear wheels via an 8L45 8-speed automatic transmission. The next step up is a new naturally aspirated 3.6L V6 that is expected to deliver 335 horsepower through the same 8-speed transmission as what is found in 4-cylinder models, but all-wheel drive is standard with both of the V6 engines. Finally, the top of the line engine is a new twin turbo V6 measuring 3.0L and sending 400 horsepower and 400lb-ft of torque to all four wheels via a heavy duty 8L90 8-speed automatic transmission.

The chassis of the 2016 Cadillac CT6 has been engineered to optimize both handling performance and ride quality, with the latest iteration of GM’s Magnetic Ride Control suspension system offering the best of both worlds. New to the CT6 is active rear steering, which means that in properly equipped CT6 sedans, all four wheels drive the car and all four wheels help turn the car. This should go a long way in helping the svelte Caddy out handle the European competitors in any situation – from blasting through a canyon at high speed to carefully cutting through a crowded parking garage.

Pinnacle of American Luxury
On the inside, the 2016 Cadillac CT6 has everything that it needs to compete with the bestselling luxury sedans in America. This includes heated, cooled front seats that massage your back while you are driving and heated, cooled seats in the rear that don’t massage you – but they do allow adjustment for different size passengers. There is also a quad zone climate control system, a 34- speaker Bose sound system, a 10.2 inch CUE infotainment center with full touch controls and the fit and finish that you would expect from a state of the art luxury car.

While the naming approach might raise some questions, there is very little to question with every other aspect of the 2016 Cadillac CT6.