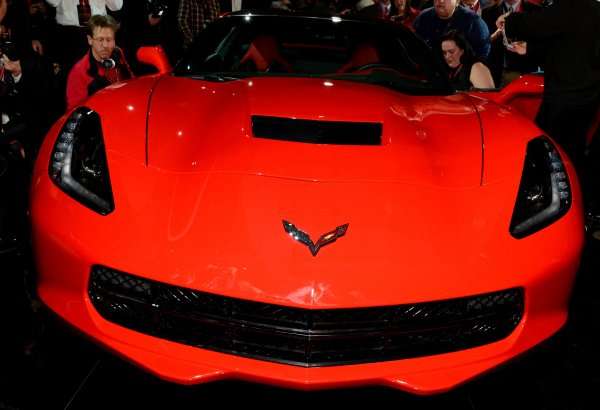 The Price of C7 Corvette Stingray in China

General Motors does not currently market the new Chevrolet Corvette Stingray in the Chinese market, but thanks to grey market importers, there are a few new Corvettes available for sale in China – which will set you back at least $273,237 American dollars based on the current conversion rates.
Advertisement

The Chinese automotive market is chock full of prospective buyers who want high end, high performance foreign sports cars and while you would think that the modern Chevrolet Corvette Stingray would be an ideal American car to answer the demand for foreign opulence; the Stingray is not sold by General Motors. Fortunately, there are some companies in China who are importing and selling the C7 Corvette Stingray as – while it isn’t sold by any GM affiliated dealerships like it is here in the US – it is legal for road use and that makes the new Corvette in China a “grey market” vehicle.

The Grey Market Explained
When cars are imported from another market because they are not sold in that market, they are known as grey market vehicles because, unlike “black market” items, these vehicles are legal for sale…they just aren’t marketed for sale by the company that normally markets them. The new Corvette Stingray isn’t illegal, it just isn’t sold by GM so we refer to it as a grey market car.

The grey market exists in pretty much every country where the automotive industry is very strong and one example of a grey market car here in the United States would be the 1996-1998 Nissan Skyline. This high performance sports car was built for a handful of markets including Japan and the UK, but it was never offered by Nissan in the US. The Skyline has a storied racing tradition overseas and that caused many American Nissan lovers to want a Skyline in their driveway so a company called Motorex went through the steps to get select Skyline models approved for US road use. In the long run, this meant that someone who wanted to buy a 1996-1998 Nissan Skyline could buy one from a US company…but that company wasn’t Nissan.

The advantage to grey market vehicles like the Nissan Skyline in the US or the C7 Corvette Stingray in China is that prospective buyers can access vehicles that are otherwise unavailable from the automaker itself. The downside is that the company selling these vehicles often have to incur some major expenses to both acquire the vehicles in question and have them approved for road use. Also, the high level of exclusivity increases the price so when combined with the high costs associated with grey market importers – the sale price of a grey price car can be much higher than the standard MSRP in other markets.

For the Chinese grey market C7 Chevrolet Corvette Stingray, that price hike amounts to an increase of more than $200,000.

There are two new Chevrolet Corvette Stingray coupes currently available in the Chinese market that I am aware of, both of which are for sale through the performance car seller Beijing Tuning Street. It is unclear what options are added to these two C7 Stingrays, but we know that one is red, one is blue, both have the standard 5-spoke wheels and both have the 6-speed automatic transmission. The original piece from CarNewsChina states that these cars have 460 horsepower so that would suggest that they are equipped with the high performance exhaust package…but I can’t read anything in Chinese so I’m just taking the world of the original source.

The 2014 Chevrolet Corvette Stingray in Torch Red at Beijing Tuning Street carries a price of 1.73 million yuan – or $281,369 US Dollars with the current conversion rates. The Laguna Blue Tintcoat Corvette has a slightly lower price of 1.68 million yuan…or $273,237 USD.

The article does state that the blue car is a base model so if I price out a Corvette 1LT with the performance exhaust, Laguna Blue paint and the automatic transmission, it would cost you around $57,535 USD. With a grey market price of $273,237, this same Corvette would cost you about $217,702 extra to buy that Laguna Blue base Vette in China.

Just one more reason for Americans to thank their lucky stars for being born in the USA where the fastest Corvette ever won’t cost you more than a quarter of a million dollars.

John Goreham wrote on September 2, 2014 - 10:06pm Permalink
I don't care what GM charges. I just hope it gets delivered in a hard plastic shell impossible to open with scissors without risk of losing an eye. And then one open I hope it is attached to a board at the bottom with a million screws or black wire ties. It would be great too if the battery that was in it was only made to last about 15 minutes. Finally, I hope it comes with a warranty registration card that falls out and immediately slides under the couch.