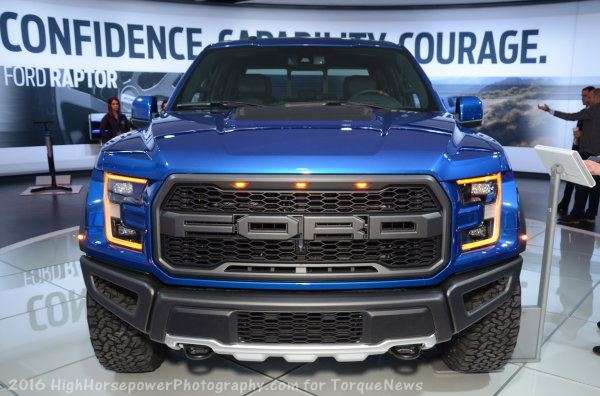 The 2017 Ford F150 Raptor is still more than a month away from reaching the first buyers, but those folks looking to secure one of the new 450 horsepower pickups are flowing into dealerships – creating an early waiting list for the next gen Raptor.
Advertisement

Last week, we brought you the news that the 2017 Ford F150 Raptor “build your own” page had gone live, allowing hopeful Raptor fans and dreamers alike to configure and price out their ideal 2017 Raptor. It turns out that by the time that Ford announced that the Raptor configurator was live on Ford.com, it had already been in action for more than a week and during that time, Ford saw a collection of interesting trends which will likely carry over to the actual sales details for the new high performance F150.

Also, Ford pointed out that while the 2017 F150 Raptor won’t hit showrooms until sometime in late December at the earliest, buyers are already making deposits at dealerships to get their hands on one of these trucks as soon as possible.

Shoppers Online Want a Big, Loaded F150 Raptor
During the first ten days of the 2017 Ford F150 Raptor configurator being live, Ford saw more than 90,000 visitors to the Raptor build page and more than 30,000 of those folks completed the online build process. It should be noted that with those 90,000 visits to the Raptor build page coming before the official announcement that the build page was live – those were organic visitors. Where many people went to Ford.com to build their Raptor after reading an article stating that the build page was live, those 90,000 checked the website without being directed there.

“This is one of the fastest and most popular product launches we’ve seen in some time,” says said Rob Rosenbach, Ford F-150 brand manager. “Traffic volume on the Raptor pages is more than five times our other performance vehicle lines, with dealer demand far ahead of expectations. This demonstrates the Ford Performance team hit its mark with the new F-150 Raptor.”

From those 90,000 visitors to the Ford F150 Raptor build page, 91% opted for the larger SuperCrew package, 90% added the Luxury Group Package and 77% added the Technology Package, so the vast majority of visitors were interested in the premium add-ons. This shows that many of the shoppers aren’t looking to buy the Raptor just for an off-road toy, as the features being added online improve the level of comfort during every day driving more than the off-roading capabilities.

Buyers Lining Up
In addition to seeing a great deal of traffic on the Ford.com build page for the 2017 F150 Raptor, Ford dealerships around the country are enjoying increased foot traffic as prospective buyers stop in to ask about Raptor availability. In fact, some of those folks have put down deposits on the first 2017 F150 Raptors to reach their dealership.

One such dealership with a waiting list for the 2017 Raptor is Team Ford in Las Vegas, which has been among the national leaders in Raptor sales since the SVT pickup was first introduced. According to dealership owner Steve Olliges, Team Ford has almost 300 customers waiting for the Raptor to arrive and at this point, he has been forced to turn away buyers with cash in hand due to the allocation limits for the 2017 model year.

“It’s a great problem to have, but it’s tough, because there’s so much interest in the product,” says Olliges. “We do everything we can to get our hands on Raptor for our customers, whether that’s referring them to other Ford dealers or making calls to find the truck for them.”

In other words, if you want to get a 2017 Ford F150 Raptor early in 2017, you might want to start calling local Ford dealerships to find one that has some units left in their allocation. At this point, you might end up putting your name on a list.