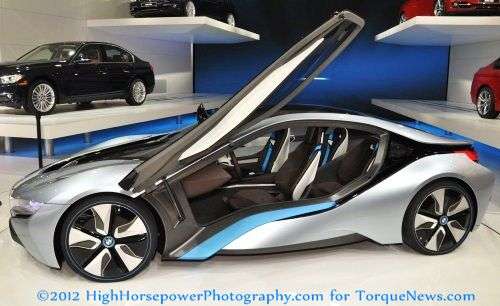 Since the BMW i8 began making its motor show rounds around the world it has been speculated that the unique German hybrid sports car would feature a gasoline-only version that would wear the famed M badge and while new reports indicate that there will be no M version of the I8- the sleek BMW sports car could pack more power than originally expected.
Advertisement

The BMW i8 will be powered by a 1.5L 3-cylinder engine sending 223 horsepower and 295lb-ft of torque to the rear wheels while an electric drive motor sends an additional 170 horsepower to the front wheels for a combined drivetrain output of around 393 horsepower and 406lb-ft of torque. With a curb weight expected to be right around 3,125 pounds, the BMW i8 is expected to rocket from 0-62 in 4.9 seconds while hitting a top speed of 156 miles per hour.

More importantly, the upcoming BMW i8 will feature an all-electric mode that will afford the driver up to 20 miles when the battery system is fully charged and when the battery is depleted, it is expected to only take around 6 hours to fully recharge the system and if a “high voltage” charging port is available, the i8 will reportedly recharge in just one hour. Also, thanks to the gasoline engine the BMW i8 has the normal endless range of a traditional gas powered vehicle in addition to the freedom of 20 emission-free miles of driving. Finally, due to the continual efforts of the on board charging system to replenish the battery connected to the electric drive motor, the 1.5L 3-cylinder offers incredible fuel economy. During European testing, the BMW i8 was found to yield an incredible 104.2 miles per gallon and while we can surely expect that the i8 will not be rated anywhere near 104mpg when it hits the US market – anything remotely near the triple digit figure would certainly make the i8 the most fuel efficient sports car on the market.

The BMW i8 is expected to arrive in the United States as a 2014 model year vehicle with a starting price somewhere around $132,000. Considering that American consumers have been willing to shell out better than $40k for the utilitarian Chevrolet Volt – finding hardcore BMW enthusiasts to pay over $132 grand for this gorgeous hybrid sports car shouldn’t be too difficult. The roomy 2+2 interior design affords enough room for four adults with unique access through the gullwing style doors and when combined with being incredibly fuel friendly and remarkably powerful; the BMW i8 could be the introduction to the next era of global sports cars.

Unfortunately, the news of the BMW i8 having 393hp, 406lb-ft of torque, a 0-62mph time under 5 seconds, a top speed over 155mph and fuel economy figures over 100mpg – Car Magazine also reports that there are no plans to offer a gasoline-only M version of the i8.

The BMW i8 will be joined by the BMW i3, which will offer pure electric capabilities in a compact city car, likely packed full of the high tech goodies that a modern BMW buyer would expect. However, unlike the i8, the i3 is not expected to come with a range extending engine at all when the car is first introduced to the various world markets but that is an option that future i3 models could get. Hopefully, an M version of the awesome i8 will come when the i3 gets that range extending engine.

danwat1234 wrote on March 23, 2012 - 10:53pm Permalink
"Considering that American consumers have been willing to shell out better than $40k for the utilitarian Chevrolet Volt – finding hardcore BMW enthusiasts to pay over $132 grand for this gorgeous hybrid sports car shouldn’t be too difficult. " Yeah, except I think GM has only sold about 700 Volts in the USA. More like 7,000 in Europe though. Lithium Ion batteries need to get cheaper; Nanowire tech. Electric cars for the win, an electric or extended range EV will be my next car
Nicolas Zart wrote on March 24, 2012 - 2:57pm Permalink
I think the point is that we're in the dawn of a new era where the technology is not yet perfected. However, with numbers as this, we are going from EV/PHEV 1.0 to 1.5, which heralds a brilliant 2.0 next step. If BMW keeps those dramatic lines, they'll have a winner in their hands.