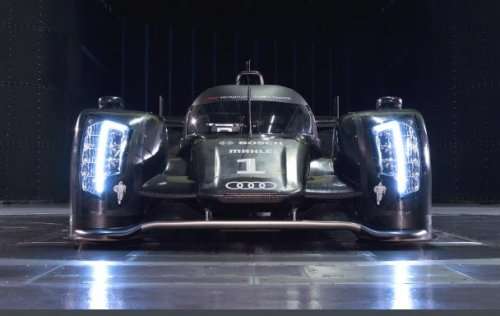 Audi has long been a dominating force in the world of Le Mans racing and their new LMP (Le Mans Prototype) competitor – the Audi R18 TDI – will take to Road Atlanta in an attempt to bring the German automaker their tenth win in the Petit Le Mans race event on October 1st.
Advertisement

Earlier this year, the Audi R18 TDI brought the company their 10th win at the legendary 24 Hours of Le Mans and with Audi America’s Team Joest bringing two cars to Road Atlanta for the October 1st Petit Le Mans, the R18 TDI will make its only appearance on US soil for 2011 as it tries to bring home the automaker’s 10th victory of the young race. Audi was the superpower in the LMP class at the Road Atlanta Petit Le Mans from 2000 to 2005, with the Audi R8 race car winning every single year. When the Audi R10 TDI replaced the R8 in 2006, the R10 kept that success going winning in 2006, 2007 and 2008 but in 2009 and 2010, the new Peugeot 908 HDi bested the Audi entry to take the LMP class victory.

However, the new Audi R18 TDI race car intends to change that with a new single piece construction and a brand new 3.7L turbocharged V6 diesel that forces out 532 horsepower. The previous LMP racer was the Audi R15 TDI, which used a twin turbocharged V10 diesel to make 590 horsepower but thanks to the lower curb weight and improved aerodynamics with the new closed cockpit, the less powerful Audi R18 TDI has proven to be faster than its predecessor. Audi expects this to be the year that they topple the Peugeot and win their 10th Petit Le Mans at Road Atlanta.

Audi Sport Team Joest will field two of the 56 teams registered to run the Petit Le Mans at Road Atlanta, with three drivers for each of the cars over the race that is run for 10 hours or 1,000 miles – whatever comes first. The first team will be comprised of German driver Timo Bernhard, Swiss driver Marcel Fässler, and French driver Romain Dumas while the other Audi R18 team will include Danish driver Tom Kristensen, British driver Allan McNish and Italian driver Rinadlo Capello. Capello and McNish were the drivers of the Audi R10 TDI that won the Petit Le Mans in 2006, 2007 and 2008 and Capello teamed up with Kristensen to win in 2002. From the first team, Marcel Fässler was one of the drivers who took the R18 to victory at this year’s 24 Hours of Le Mans and while Bernhard has had plenty of Petit Le Mans success, he has done his winning at the GT level, most recently with the Porsche 911 GT3.

When you combine the early success of the Audi R18 TDI with the number of wins across the 6 drivers taking the wheel of this new Audi racer on October 1st, Audi Sport has a good chance of adding another notch to its belt in winning the 2011 Petit Le Mans at Road Atlanta. This race is the only time that the Audi R18 TDI is expected to compete on US soil this year.

Other Audi News:
Audi settles dispute with rapper Eminem over A6 commercial
Chromed out Audi R8s raise $1 million for Sir Elton’s charity
The Audi A2 Concept looks ready to tackle the BMW i3
The Audi R8 E-Tron nearing final stage at the 2011 Frankfurt Auto Show