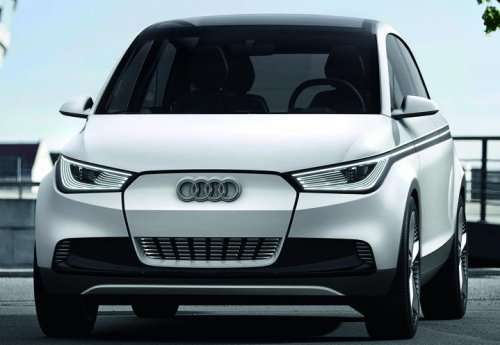 The Audi A2 Concept looks ready to tackle the BMW i3

The Audi A2 Concept is expected to make its grand debut next week at the 2011 Frankfurt Motor Show but the German automaker has offered up a couple images and some scant information as to what to expect from their new subcompact.
Advertisement

While the original concept drawings released last week made the Audi A2 look more like a sport compact (click here for a look at those drawings), the official company images show a far more reasonable vehicle that will likely offer an electric subcompact that focuses more on luxury and fuel economy than the uber high tech look of the upcoming BMW i3. Up front, we see a grille layout similar to the other current Audi models but in the lack of a gasoline engine, there is less need for cooling openings so the Audi A2 Concept features a front end that is heavily closed off to increase aerodynamics and with that – improved electric range. Large headlights similar in shape to those found on the new A6 with unique LED lighting that stretches out to the fender – with a body line continuing all the way back to the taillights.

Along the side, the new Audi A2 Concept has a massive greenhouse that should make for plenty of headroom with a short bonnet (hood) with the lack of a bulky combustion engine to need more engine bay space. Out back, the A2 has some great looking taillights flanking the Audi logo in the middle of the rear lift gate that completes the super-clean look of this new subcompact electric vehicle. The true beauty of the Audi A2 is that, shy of the lack of exterior door handles it looks as though it is fairly production-ready.

Inside, the Audi A2 features a far more futuristic layout with an extremely minimalist look to the driver information center and the infotainment system mounted just to the right of the steering wheel – all of which looks to be controlled by the many steering wheel mounted controls. The goal of the minimalist interior should allow for optimal seating room for four adults with the super thing seats helping to further make the most of the available interior space. Also, thanks to the use of copious amounts of aluminum, carbon fiber and other lightweight materials, the A2 is said to have a curb weight of just 2,535lbs- making it around 200lbs lighter than the BMW i3 that it will go head to head with when it hits the market.

The key feature of the Audi A2 Concept is the electric drivetrain that uses an 85kW engine with lithium ion batteries to send 199lb-ft of torque to the front wheels with the help of a single speed transmission system. This drivetrain allows the A2 to travel around 125 miles on a single charge and when the batteries get low; it should only take around 4 hours to charge the electrical propulsion system. Also, while it will probably cut heavily into the battery range, the Audi A2 should be able to hit a top speed of 93 miles per hour and rip from 0-60 in just 9 seconds. Finally, it has been suggested that the Audi A2 Concept will offer an autonomous system…which means that it will (in theory) drive itself if you are not familiar with the term. This portion also seems to be a little farfetched for a production vehicle in the near future but with self-driven cars running around the US, autonomous capabilities may not be too far off and Audi is taking the lead with this technology on their new A2 Concept.

The Audi A2 Concept will make its grand debut next week at the 2011 Frankfurt Motor Show and when it does, we can expect more information on the luxury electric vehicle that Audi intends to challenge BMW’s new i3. Check out the gallery on the right for a closer look and stay tuned to TorqueNews for all of your breaking automotive news and auto show coverage.