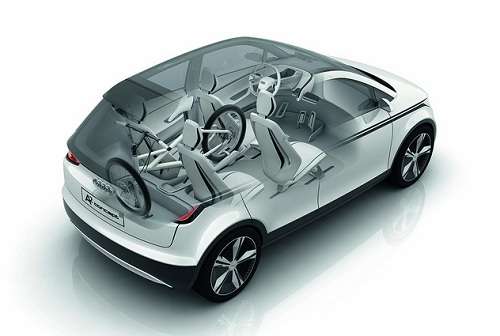 Audi A2 concept looks at future with Facebook chat option

Audi announced that at the 2011 Frankfurt International Auto Show it will present its A2 concept car, presenting a new look at the future of electric-car driving. What's interesting about the car is that it merges social media with driving experience.
Advertisement

Audi A2 concept, according to the company, will be spacious for four people. The length of the car is 3.80 meters. Innovative interior look, Matrix beam and the dynamic light will make this concept another feel-good driving car. The long range and agile performance will be provided by its powerful electric drive system.

Audi's original A2 Compact MPV styled five-door hatchback was also first introduced in 1995 at the Frankfurt Motor Show. The original A2 was attracted attention because of the fact that it was from aluminum. But the story kind of ended in 2005 when the last car left the factory. The previews A2 did not manage to samble good success. The price simply was too elitist with respect to services offered

Now, Audi with a new and innovative design brings ath A2 concept back to be presented again in Frankfurt (dates are September 15 to September 25). While it has the name and the format (dimensions are almost identical to its predecessor 3.80m vs. 3.82 m in length) of its predecessor it comes with an electric engine this time around. Although we still need to wait for the precise characteristics.

Audi, obviously likes clean cities and wants as many people to drive electric cars as possible, especially when taking into consideration the growing number of green zones in Germany that have even included the Frankfurt Auto Show location. The auto maker, which in just reported "best-ever august U.S. sales," is proposing something news.

The Headlinghts of A2 Concept

Audi is bringing the next phrase of LED technology called matrix beam. What matrix beam does is it creates high-beam light by mixing LEDs and microreflectors. Laser diodes produce the rear fog light. Thus the fog light is seen as a beam of light in fog and it projects a red triangle onto the road. The variable brightness of the new generation of LED lighting makes it possible that taillights light beams differently depending on the weather.

The Interior of Audi A2 Concept

The flat interior floorboard shows that this is still a concept car. There is space and light. The seats (four of them) are individual and the fold-up seat cushions have storage spaces underneath. A2 concept is distinguished by its central console attached to the driver's seat. The dashboard has minimal design. Interestingly one of the interior dashboard pictures shows a Facebook chat option. Probably it's an option to chat with driver's social media friends. This may be a good way of eliminating speaking on cell phone and driving by one hand.

For now, Audi does not reveal any details about the engine of this machine. Some European automotive websites rumor that the Audi A2 concept will initially be launched with an electric motor powered by Lithium-ion batteries. At this time we don't know much about this new concept. The only few things the company has released is that it will be electric, will have matrix beam and few details about its interior. However, expect to see the A2 concept standing in Audi's pavilion at the 2011 Frankfurt Auto Show and then the media can give more opinion.