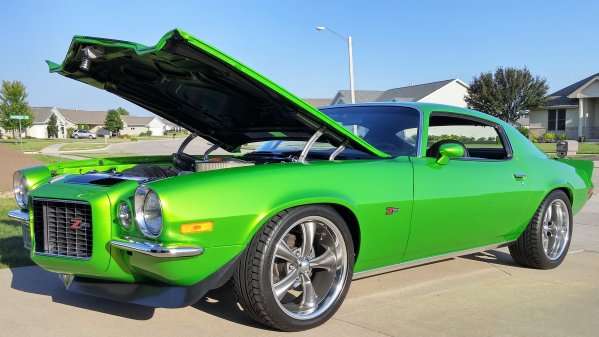 Each month, TorqueNews teams up with the crew from the Camaros Unlimited Facebook page to select our Camaro of the Month. The process begins with the members of the Camaros Unlimited Facebook page – numbering more than 40,000 strong – nominating their favorite Chevrolet Camaro owned by a fellow member of the page. Once five cars/owners have been nominated, the voting begins and when the balloting closes – we have our Camaro of the Month. In fact our March Camaro of the month was also a 1973 Camaro Z/28, but a red color.

For April 2017, the Camaro of the Month is this stunning1973 Chevrolet Camaro Z/28 Type LT RS shown above, owned by Adam Kappell. We reached out to Adam for more information on his beautiful green muscle car and this is his story:

Adam Kappell’s 1973 Chevrolet Camaro Z/28 Type LT RS
I've always like the second generation Camaros and among those, the 1970-1973 models are my favorite, so I decided to find one and build it myself. After doing a little internet searching I found one in Detroit, Michigan which interested me.

After a few phone calls I decided to take a drive and check it out in person. When I arrived, I found a car in excellent condition, so I asked the person selling the car if it had always been in Michigan or if he had come from down south. He explained that this Camaro was his mother’s “Sunday Fun day” car, having purchased it new back in 1973 and only driving it when there wasn’t salt on the roads. Upon hearing that story, I made and offer and he accepted it.

I brought the 1973 Camaro Z/28 home and I began disassembling the whole car down to every nut and bolt with the intent of completing a full restoration. Fortunately, since the car had no rust, the restoration process was fairly simple and the car retains all of its original sheet metal.

During the course of the build process of my 1973 Camaro, I changed a few things – adding Snake Skin Green paint from a Dodge Viper, 18-inch bright polished Boss wheels with 235/40 front tires and 275/40 rear tires and the suspension upgrades to give it this stance (although I did keep all of the original parts in case I ever want to return the car to factory original.)

Finally, the heart of my 1973 Camaro Z/28 Type LT RS is a 350 cubic inch Chevy V8 packing around 430 horsepower at the flywheel. The engine features aluminum heads, a roller camshaft, MSD Atomic EFI, shorty headers and Flowmaster exhaust and it is mated to a TH350 transmission with a 10-inch, 3000rpm stall convertor.

I don’t have any plans for my Camaro for the immediate future, but all car guys know that these cars are never really "finished"!