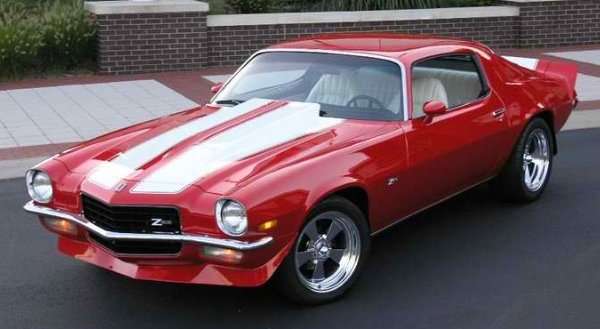 The TorqueNews/Camaros Unlimited Camaro of the Month for March 2016 is the spotless 1973 Chevrolet Camaro Z/28 – owned by Ray Cochran of Grand Rapids, Michigan.
Advertisement

Each month, TorqueNews teams up with the crew from the Camaros Unlimited Facebook page to select the Camaro of the Month. The process begins with the members of the Camaros Unlimited Facebook page – numbering more than 40,000 strong – nominating their favorite Camaros owned by fellow members of the page. Once five cars/owners have been nominated, the voting begins and when the balloting closes – we have our Camaro of the Month.

For March 2017, the Camaro of the Month is this super-clean 1973 Chevrolet Camaro Z/28 shown above, owned by Ray Cochran of Grand Rapids, Michigan. We reached out to Ray for a rundown on his Camaro and this is what he had to say.

The Story of Ray Cochran’s 1973 Camaro Z/28
This 1973 Chevrolet Camaro Z/28 began its life as a brown car with black stirpes, a tan interior and an automatic transmission. When Ray Cochran bought this Camaro in 1999, it was Viper Red with white stripes with a black interior and while it still had the original 350cu V8 – it had been fitted with an M21 4-speed manual transmission paired with a set of 3.73 rear gears.

Since getting his 1973 Camaro back in 1999, Ray has worked with his friends in the Western Michigan Camaro Club to transform his muscle car into the machine that it is today.

Under the hood, the stock 350 is gone and in its place is a 388 cubic inch Vortec stroker motor, leading down 390 horsepower and 460lb-ft of torque. That power is set to the rear wheels via an M22 “rock crusher” 4-speed manual transmission rather than the M21 and out back, a set of 3.08 gears makes this Camaro a better highway cruiser.

In terms of handling, Ray’s 1973 Camaro Z/28 has had a complete front and rear suspension rebuild, with Eibach springs and Edelbrock shocks, along with Customworks engine bay bracing and Comp Engineering subframe connectors.

Finally, in addition to swapping out the black interior for white, Ray has added a steel cowl induction style hood to his bright red Camaro Z/28.

Going forward, Ray Cochran has a few plans for his 1973 Chevrolet Camaro Z/28. These projects include replacing the current GM 906 iron cylinder heads with a set of aluminum Edelbrock Votxtex heads, converting the rear drum brakes to a disc setup and swapping out the rear leaf springs for a 4-link setup.