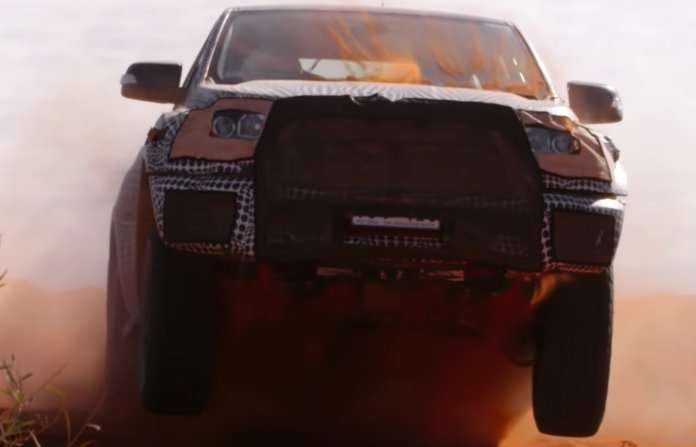 There is some question as to whether the next generation Ford Ranger Raptor will be offered in the United States, but with the Motor Company’s dominance of the American truck market – they need to offer the high performance variant of their new mid-sized pickup in the USA.
Advertisement

Ford Motor Company recently confirmed that the new Ranger Raptor will make its formal debut on February 7th in Bangkok, Thailand. There are few details available on the mid-sized Raptor, but rumors suggest that it will be powered by a new 2.0L turbo diesel. It is expected that this rumored Raptor turbo diesel will deliver more power than the 3.2L 5-cylinder diesel in the current Ranger. That current mill offers 197 horsepower and 347lb-ft of torque (147kW/470Nm), so something in the area of 250hp and 400lb-ft of torque would make this the strongest and quickest Ranger.

That sounds great, but with the rumors of this new 2.0L turbo diesel for the Ford Ranger Raptor – coupled with the choice to introduce the vehicle in Thailand – comes the rumor that this smaller Raptor will not be offered in the United States. Of course, we don’t know whether or not the Ranger Raptor will be offered in the US, but with the current trends in the American truck segment, Ford needs to offer the high performance package on the home soil.

The Need for a Ranger Raptor in the US
Ford Motor Company is, without question, the leader in the truck market in the United States. The Ford F-Series has been the bestselling truck and bestselling vehicle overall for decades, but sales numbers aside, Motor Company trucks are generally the leaders in their respective classes.

For example, the Ford F-150 is consistently atop the list of the strongest, most efficient and most powerful half-ton trucks while the Super Duty pickups are usually the most powerful in the heavy duty segment – often leading in horsepower, torque and working capacities (towing and hauling). Of course, the F-150 Raptor is the leader in pickup truck performance, offering more power and greater off-roading capabilities than any other truck in the USA.

However, Ford doesn’t have any presence in the rapidly-growing midsized truck segment. Toyota and Nissan have long been the leaders, but the newest Chevrolet Colorado and GMC Canyon have grabbed a chunk of that market share. Most notably, the new Colorado ZR2 is the best-performing truck in the segment.

The Ford Ranger will be re-introduced to the US market in the next two years to do battle with the likes of the Toyota Tacoma, the Nissan Frontier and the Chevrolet Colorado. We can expect that the new Ranger will quickly grab up some market share, but we know that the truck class is all about claims beyond sales numbers. Right now, the Colorado ZR2 is the leader in off-roading abilities, with some outlets going so far as to compare it to the F-150 Raptor.

Ford could put those comparisons to sleep by introducing a Ranger Raptor in the US market that will take down the Colorado ZR2. More importantly, offering a great midsized Raptor in the US could allow Ford to claim the title of the best off-road trucks in the two most popular pickup segments in America.

If nothing else, the devout following of Ranger fans coupled with the recent success of higher performance midsized pickups like the Chevy Colorado ZR2 and the Tacoma TRD Pro prove that there is definitely a market for a smaller Raptor. On February 7th, we will meet the new Ranger Raptor – then we will have to hope that the Motor Company plans to sell it in the USA.