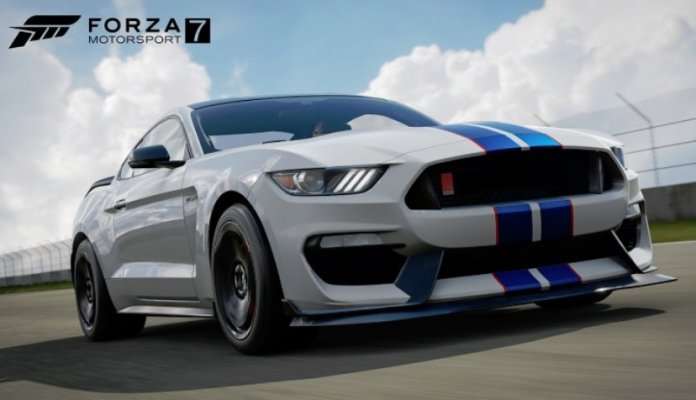 The makers of Forza Motorsport 7 have announced a preliminary list of the Ford Motor Company vehicles featured in the new racing simulator and as you might expect, 9 of the 37 FoMoCo vehicles included so far are Mustangs – but there are plenty of Ford compacts and pickups included in this first list.
Advertisement

Forza Motorsport 7 will introduce the Xbox gaming world to the next generation of racing simulator and when the game arrives later this year, it will include more than 700 cars, trucks, vans and SUVs. Turn 10 hasn’t rolled out the full list of Forza 7 vehicles, but the company has published a few partial lists, including one which details some of the vehicles from the American automakers and with 37 vehicles – Ford Motor Company is the most heavily represented company from the USA.

Today, we bring you a look at the Ford Motor Company vehicles of Forza Motorsport 7 – or at least those vehicles which have officially been announced.

Heavy Dose of Ford Mustang
The Ford Mustang is the bestselling sporty car in the world right now, so it should come as little surprise that the internationally marketed racing simulator would offer plenty of the Ford’s popular pony cars. 9 of the 37 FoMoCo vehicles on the initial Forza 7 vehicle list are Mustangs, ranging from the 1971 Mach 1 to the 2016 Shelby GT350R. This short list includes models from every generation, including the classic Mustang, the Mustang II, the Fox Body, the SN95, the New Edge, the S197 and the S550. Oddly, there is no Mustang from the earliest years (1965-1970), but I expect that we will see one of those as part of a longer list – or an expansion pack.

The Aussie Falcon
Next up, my Australian readers who partake in the Forza Motorsport series will be happy to hear that there are 7 examples of the Ford Falcon from Down Under. From the 1971 Ford Falcon XY GTHO Phase III to the 2015 Ford Falcon XR8, Aussie Forza fans will find their favorite Ford performance car from their local market on the list.

Compacts Galore
Next, 11 of the 37 Ford Motor Company vehicles included in the initial Forza 7 list are compact performance cars from various global markets around the world. The high performance compacts from Ford of Europe, like the 70s Capris and Escorts are present, along with the RS Evolution, some of the pre-USA Focus RS models and some of the Cosworth-tuned small cars. There are also a couple US-sold Ford compacts, like the 2014 Fiesta ST and the new Focus RS.

Trucks, SUVs and Vans
While cars will likely be the most commonly used vehicles on Forza Motorsport 7, there will still be classes for trucks, vans and SUVs, so the initial Ford list includes the 1956 F100 pickup, the 1975 Bronco, several different Raptors and the European Transit SuperSport van.

The Final Four
Finally, there are four FoMoCo vehicles which don’t fit into any of the categories above, including the 2005 GT supercar, the 2017 GT supercar, the 2010 Crown Victoria police car and the only Mercury on the game – the Cougar Eliminator.

Below you will find a complete list of the Ford Motor Company vehicles already announced for FM7 and if you are interested in which Chrysler Group/FCA vehicles are on that list, click here for a closer look.