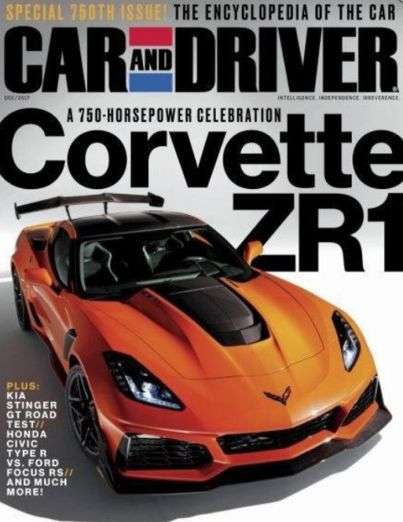 We don’t know for sure when the 2019 Chevrolet Corvette ZR1 will make its formal debut, but the 750 horsepower supercar has been leaked on the cover of the December issue of Car & Driver magazine – finally putting to rest all of the rumors about the next step in the evolution of the C7.
Advertisement

After years of speculation and rumors, the 2019 Chevrolet Corvette ZR1 is here – or, at least it is on the cover of the December issue of Car & Driver magazine. Evidently, this issue wasn’t supposed to be released until later this month, but it leaked early online and because of that, we have our first look at the most powerful Corvette of all time. All we have is the cover, but just above the name of the car is the line “A 750- Horsepower Celebration” – leaving little question that the new super-Vette will pack 750 horsepower.

The 2019 Corvette ZR1 Exterior
As expected, the 2019 Chevrolet Corvette ZR1 has the prominent aero bits that we have all been seeing on test cars over the past year or so, including a more aggressive front fascia and a massive rear wing. The ZR1 also has larger cooling ducts in the front fascia, larger rear brake cooling ducts in the quarter panels and a higher-rising, vented hood – presumably making room for a supercharged V8.

Really, the spy shots and videos showing what we all believed was the 2019 Corvette ZR1 test mules told us everything that we needed to know about the exterior design, but the December Car & Driver cover confirms that the mysterious Corvette test cars with the extreme aerodynamics components were indeed the C7 ZR1.

750 Horsepower
What we didn’t learn from the spy shots and test mule videos was how much power the C7 Corvette ZR1 would offer, but thanks to the leaked Car & Driver cover, we know that it will pack a whopping 750 horsepower. That makes the C7 ZR1 the most powerful production Corvette ever, but it also makes this Corvette the second-most-powerful road-going American production car ever – trailing only the 840 horsepower Dodge Challenger SRT Demon.

This incredible level of power will easily allow the 2019 Corvette ZR1 to compete with pretty much any exotic car in the world on any type of race track. It will also beat pretty much any American production car ever built on a road course while only trailing the aforementioned Dodge Challenger on the quarter mile.

So, we still don’t know when Chevrolet will formally introduce the 2019 Corvette ZR1, but thanks to C&D, we know what it looks like and we know that it will be the most powerful Corvette ever.