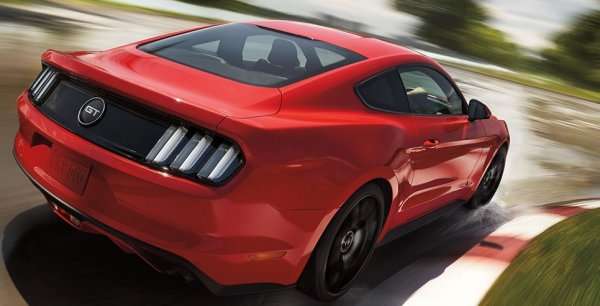 670hp Ford Mustang Delayed in Australia by the Government

Ford Motor Company plans to offer a 670 horsepower version of the Ford Mustang GT with a Roush supercharger package at Australian dealerships with a full warranty, but the Australian regulatory process has caused a delay in the automaker launching these high performance models – forcing owners of the popular new Mustang to search elsewhere in their quest for more power.
Advertisement

A while back, Ford Motor Company’s Australian brand announced that they would begin offering a 670 horsepower, Roush-supercharged version of the new Ford Mustang GT at dealerships around the country. While being able to buy a 670hp Mustang GT at your local Aussie Ford dealership is nice, what was even nicer was that Ford planned to add the high performance supercharger package without voiding the factory warranty. This meant that those folks down under who are buying a new Ford Mustang GT could have the Roush supercharger kit installed at the dealership and they could drive out with a new American muscle car with 670 horsepower and a comprehensive warranty.

Unfortunately, the company’s plans have been halted by the Australian government, as they examine this new performance package under the guidelines of the Australian Design Rules (ADRs). The Australian Design Rules are similar to the government approval process applied to every new vehicle sold here in the US, looking at the vehicle safety, anti-theft and emissions impact of new models and it seems that in the case of the dealership installed Roush Mustang GT package- the Aussie government is taking its sweet ol’ time.

Why This Matters
While many of my regular American readers might not know this, American performance vehicles are and always have been very popular in Australia, but in many cases, the American performance vehicles down under are very different from those sold here in he US. The Chevrolet Camaro and Ford Mustang – while available through grey market importers – have traditionally not been offered by the automakers in the Australian market. Instead, GM has supplied their Australian high performance fans with vehicles like the Holden Commodore and the Holden Monaro while Ford has run the race with the likes of the Falcon – all of which are rear wheel drive sedans. GM fans in the US will recognize the Commodore as the current Chevy SS while the Monaro was what Americans knew as the ill-fated Pontiac GTO. Ford has never offered the Aussie Falcon in the US, but since Ford fans here get the Mustang – few people really cared.

These three vehicles are among the most popular American performance vehicles in Australia and, as is the case here in the US, the people who buy those cars want to make them more powerful. As the Falcon is killed off, the Mustang will seemingly fill that slot in Ford’s performance lineup down under and with the growth in popularity of the Mustang comes a big demand for aftermarket performance improvements.

Ford wants to head off that aftermarket push with a high performance package of their own for the Ford Mustang GT, but right now, the Aussie government is clogging up the supply chain with red tape.

670hp Mustang Wrapped in Red Tape
While the specifics of the delay aren’t available, the only thing stopped Ford of Australia from selling the Roush-supercharged Mustang GT with 670hp and a warranty at local dealerships is the Australian Design Rules certification process. The ADR board has to approve every new vehicle sold in Australia and since the Roush-charged Mustang GT will be sold at dealerships, it is subject to the ADR approval process. This process doesn’t have a set length of time, so until the government finishes their testing and approval process of the Mustang GT with 670hp, it will not be cleared for sale at dealerships around the country.

The good news is that a similar kit Is sold here in the US and those Ford Mustang GTs equipped with the 670hp Roush package are street legal in all 50 states. This means that the Roush-equipped cars still pass emission testing and safety tests, and if these muscle cars meet the American requirements on safety and emission levels, it seems unlikely that the Australian government would deny it.

However, there seems to be no clue as to how long it will be before the 670hp Roush Mustang GT is cleared under the ADR process. In the meantime, those folks who are lucky enough to have gotten one of the first new Mustang GTs down under will be forced to turn to one of the many capable aftermarket tuning companies for their high performance needs.

Steve wrote on September 7, 2016 - 9:51am Permalink
It seems to me the liberals in Australia have been giving Ford a hard time after Ford closed factories there, just another example of over-reaching government that believes it knows what is best for everyone.
Kelvinlynch wrote on December 18, 2016 - 5:21am Permalink
Please let me know when the 670 HP is availability in ford dilerships in Australia
Chuck schipper wrote on July 16, 2018 - 11:14am Permalink
The above article says that the Roush supercharger is 50 state legal. As of July 16th, today, the dealer-installed supercharger has not been yet certified in CALIFORNIA. I spoke with Roush last week and they told me paperwork has been sent to California’s Air Resources Board and are waiting for final approval.