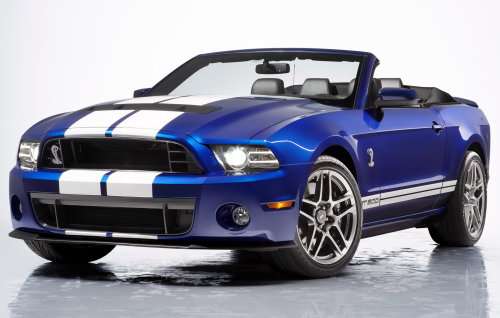 We have known for some time that there would be a revised Shelby Mustang GT500 Convertible packing the new 650 horsepower SVT-built V8 and while many believed that the new drop top super-Stang would debut last month in the Motor City; Ford waited until the 2012 Chicago Auto Show to introduce the 2013 GT500 Convertible. This shouldn’t come as a huge surprise as it was in Chicago, 20 years ago, when the then-new SVT program unveiled their first vehicles with the 1993 SVT Mustang Cobra and the 1993 SVT F150 Lightning.

As expected, the new GT500 Convertible is mechanically identical to the hard-topped Shelby GT500 Coupe with a 5.8L supercharged V8 packing 650 horsepower and 600lb-ft of torque. This new power output was created by adding a cross-drilled engine block and cylinder heads, a larger supercharger than was found on the 2012 GT500, and new camshafts. SVT has also equipped the 2013 GT500 Convertible with a carbon fiber driveshaft, a stronger clutch, an upgraded transmission and strengthen axles. The end result is that, like the GT500 Coupe, the 2013 Shelby GT500 Convertible packs the most powerful production V8 in the world.

The 2013 Shelby Mustang GT500 also includes optional Bilstein electronic adjustable suspension and a Brembo brake setup featuring 6-piston front calibers clamping down on the massive rotors. The result of these additions for the 2013 GT500 Convertible is a new model that was 3.5 seconds faster around Sebring International Raceway than the outgoing GT500 Convertible – and we can expect that the 2013 GT500 ‘vert will be faster in the standing quarter mile than the outgoing model as well.

"The Shelby GT500 convertible is every bit the performer that the coupe is," said Kerry Baldori, SVT Global Performance Vehicles chief engineer. "All of the significant changes we made in the program were instrumental in delivering a convertible that could really shine on the track but can still be driven on a daily basis."

One key difference that we should point out is that Ford has applied a speed governor to the 2013 Shelby GT500 Convertible – cutting the top speed from the 200 mile per hour level that the GT500 Coupe is capable of to a very balmy 155 mile per hour limit for the topless GT500. 155mph is the limit at which Ford currently governs all of their Mustang Convertibles but a speed limiter is a simple problem to get around with the help of the many hand tuners available in the aftermarket.

The Bilstein electronic adjustable suspension is part of the Performance Package for the 2013 Shelby Mustang GT500 and for those GT500 Convertible buyers who want even more capabilities out of their new 650 horsepower convertible, SVT also offers a Track Package that adds an external engine oil cooler, a rear differential cooler, and a transmission cooler.

Tsingshan's Threat to Tesla: EV Maker Is In Battery Crosshairs
Tesla-Funded Research Reveals One of The Biggest Mysteries of EV Battery
END_OF_DOCUMENT_TOKEN_TO_BE_REPLACED