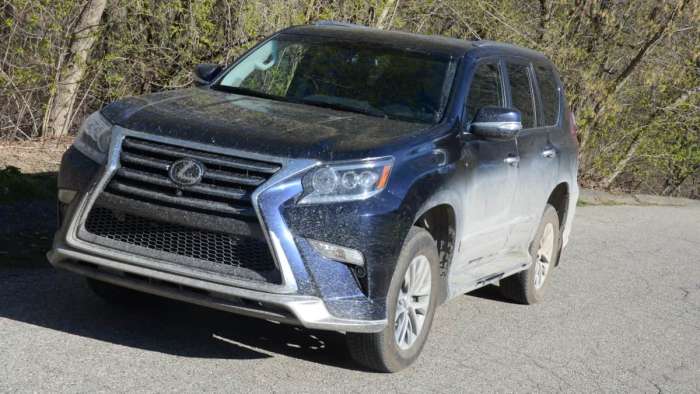 The 2019 Lexus GX460 combines impressive go-anywhere driving dynamics with V8 power and the level of premium amenities that you would expect from a modern luxury SUV.
Advertisement

Years ago, long before the Lexus GX460 was introduced, driving a four-wheel-drive sport utility vehicle required you to compromise comfort for durability and the ability to go just about anywhere. Whether you were talking about smaller models like the Toyota 4Runner and the Jeep Wrangler or larger models like the Dodge Ramcharger or the Chevrolet Suburban, SUVs of the 1970s and 1980s were basically the opposite of a luxury vehicle. Sure, you could get leather and a premium-at-the-time sound system, but there is no questioning the fact that old school SUVs fell short of the expectations of luxury sedan drivers.

That is why many luxury owners were initially resistant to the idea of driving a truck or SUV, but times changed. As the sport utility vehicle segment has grown, we have seen a shift towards far more luxurious models, but in many cases, these vehicles are nowhere near as capable as the big, old SUVs of yesteryear. For instance, Lexus offers several great, small SUVs that will get you from point A to point B in most weather conditions, but those relatively low-riding models aren’t unstoppable. 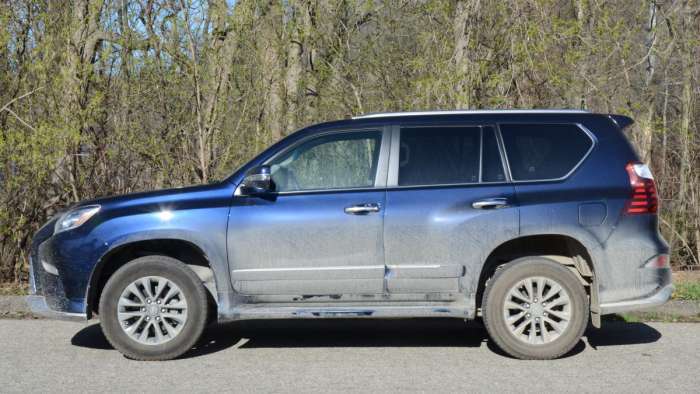 For a modern SUV to be unstoppable, it needs to sit and ride more like a truck than a crossover. It needs to have plenty of ground clearance, plenty of power and it needs to have a suspension system that will allow it to deal with all sorts of driving conditions. In short, to face the worst that Mother Nature can drum up, you need a bigger SUV. The Lexus GX460 is that bigger SUV.
Here are 5 reasons why the 2019 Lexus GX460 is a great daily driver year-round, whether you drive on-road or off, even in the heaviest winter storms.

Big, Roomy Cabin
First up, the Lexus GX460 has a cabin that the driver and passengers will love. The front and second row seats all have gobs of space in every direction, so you can comfortably carry four large adults. There is also a third row, but those spots are a bit tight for a taller adult. They are fine for kids and smaller adults, but most adults wouldn’t want to be in those back seats for a long time. 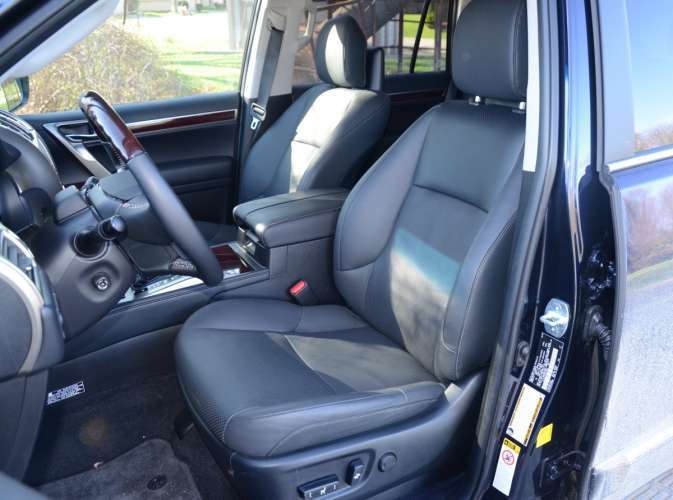 That being said, I have no use for the third row, so I kept those seats folded down most of the time. That creates a huge cargo area, without cutting into the passenger space of the main seating areas. There aren’t many vehicles left on the market today that offer this much passenger space and this much cargo space, with the option of the third row when needed. 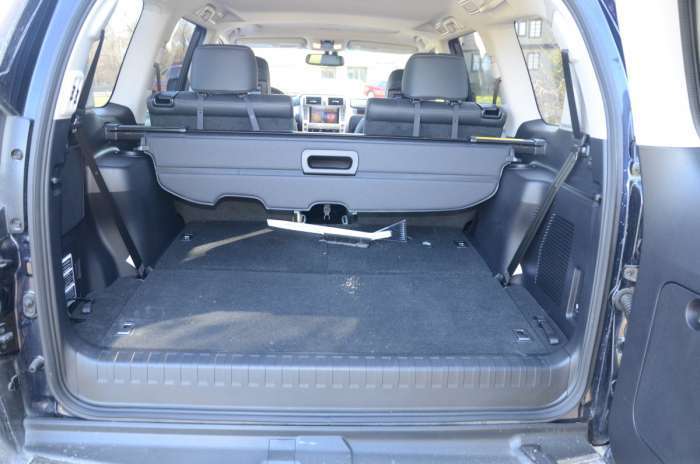 More importantly, there aren’t many vehicles that offer this much interior space and this level of luxury, which brings us to my next point.

Lexus Luxury
When it comes to big SUVs, the Lexus GX460 is one of the biggest and it is also one of the most well-appointed. The front and second row seats are roomy, but they are also wrapped in soft leather and plush padding. The front seats are heated and cooled, the second row is heated, so all of the key seating spots are heated for winter driving. The steering wheel is also heated, and the three-zone climate control system allows the driver, passenger and second row passengers to each select their own comfortable temperature. For those of you who like dedicated controls, the GX460 has a fairly elaborate HVAC panel that is easy to read and use on the fly. 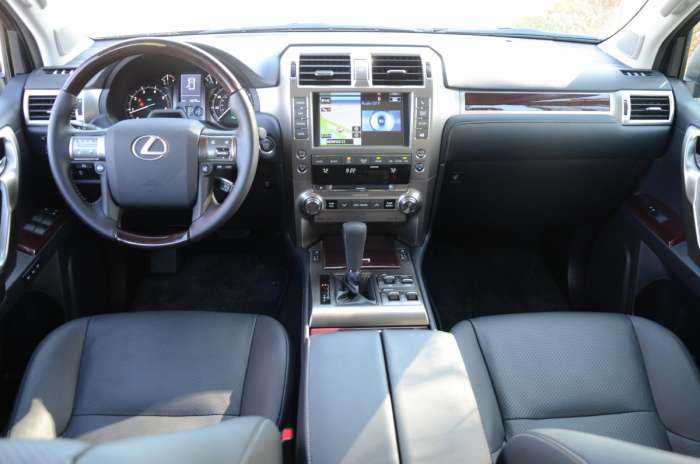 Next, the Lexus GX460 has an impressive infotainment system that starts with the 8-inch touchscreen in the dash. This screen controls the navigation, sound system and climate control system, but there are also hard buttons and knobs for the sound system. There are also plenty of controls on the steering wheel, so the driver can flip through preset radio stations, adjust the volume or answer a phone call with the hands-free system. 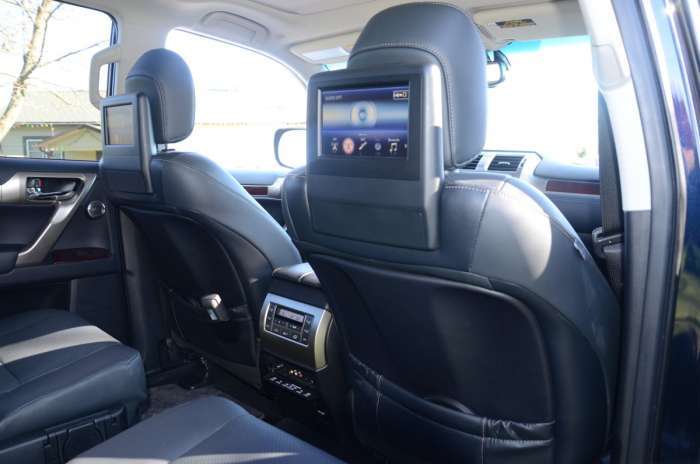 My GX460 test vehicle also had the optional second row entertainment system. For $1,970, you get a screen in each of the front headrests with multiple input options. There are also dedicated headphones for each of the screens, so your rear riding passengers each get their own screen and volume control, while the driver can still listen to the radio. If you have kids that spend lots of time in the car, this system is a fantastic feature.

Finally, like a proper Lexus, this big SUV is filled with premium materials. Much of the cabin is lined in dark leather, there is mahogany trim on the dash and door panels, with satin silver trim throughout. From top to bottom, the GX460 interior looks and feels like a proper luxury vehicle.

V8 Power and Functionality
The 2019 Lexus GX460 is powered by a 4.6-lier V8 that delivers 301 horsepower and 329 lb-ft of torque. Those aren’t huge numbers, but the V8 affords this big SUV solid acceleration from a stop and when building speed on the highway. You aren’t going to take it racing, but it provides the response and power that you expect from a V8. Even when you have four people and some random cargo loaded up, the 4.6-liter mill barely breaks a sweat. 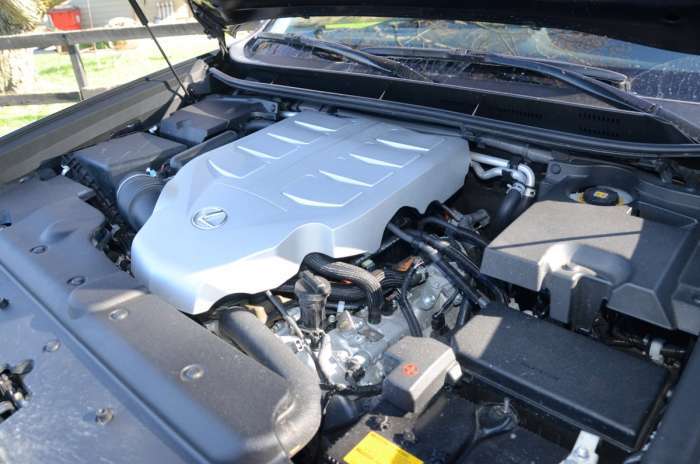 My test vehicle was not equipped with a trailer hitch, but you can get one as an option. I have used a GX460 in the past to tow a 2-horse trailer and it pulled nicely. For a trailer that weighs less than 5,000 pounds, this SUV is a great option. It handles the weight well whether turning, stopping or accelerating.

If you are really concerned about the acceleration and power numbers, the GX460 probably isn’t for you, but if you want a strong-running, large SUV that can pull a small trailer, this engine provides plenty of power. It also has a nice V8 grumble to it. It doesn’t sound like a performance car, but it leaves no question as to whether or not it has a V8 under the hood.

Trick Suspension
The Lexus GX460 comes with a height-adjustable rear suspension setup with automatic load leveling and an adaptive variable damper system. Using switches on the center console, the rear suspension system can be raised or lowered, making for easier access for shorter folks. More importantly, the adaptive suspension setup has sport and comfort modes, so when you want a smoother ride, you can flip the switch to that setting. When you want your big Lexus SUV to be a little stiffer in the corners or on rough roads, the sport mode is offers better feel and control. 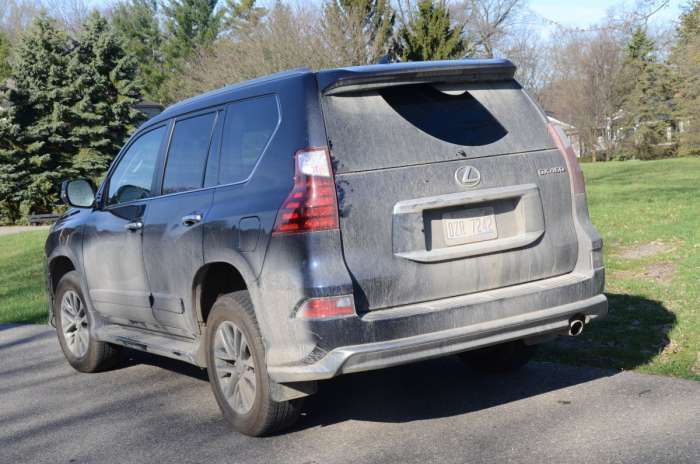 There is no off-road setting for the suspension, but I found that sport mode handled the bumps better than comfort mode, but that depends on the roughness of the road surface. On the other hand, when you are cruising down the highway, comfort mode allows the GX460 to ride remarkably calmly for a vehicle of this size.

Proper Big SUV Feel On-Road and Off
Finally, the Lexus GX460 offers the “big SUV feel” that is nearly impossible to find in the luxury segment these days. The shift to smaller crossovers has led many automakers to make “big SUVs” that are actually just big midsized crossovers. They don’t feel like big SUVs on the road and they completely lack the truck-like feel that I enjoy about this Lexus.

While few Lexus owners will ever do any offroading, many areas with premium housing have dirt roads and those roads can get pretty nasty in the winter. Metro Detroit has many of them and they are treacherous right now, at the point of the year where we have freezing and thawing, rain and snow. Small SUVs and crossovers struggle, some small sedans get stuck. The GX460 covered these rough roads every bit as well as the other large SUVs that I have tested in the past few years. 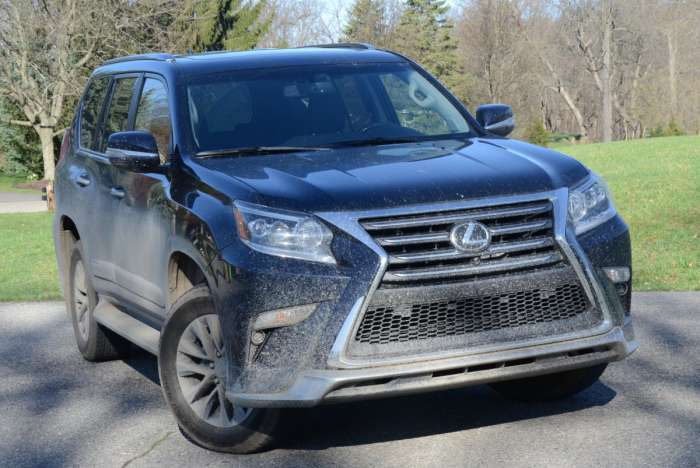 If you want a roomy luxury SUV that you can drive year-round in any weather condition, with seating for six, premium infotainment and the ability to tow a trailer with V8 power, the Lexus GX460 is one vehicle that you want to drive before buying something else. It offers the basic road feel of a truck-based SUV, as well as the ability to handle the roughest roads in the worst winter weather – all while carrying the people inside in the lap of luxury.

My 2019 Lexus GX460 test vehicle shown here had an MSRP of $70,840, which is considerably less than other big SUVs, so as luxury models go, this big Lexus is a great bargain.

Tesla-Funded Research Reveals One of The Biggest Mysteries of EV Battery
Tesla Tesla Buyer Nets a Whopping $12,000 Discount After Asking for Reduction
END_OF_DOCUMENT_TOKEN_TO_BE_REPLACED