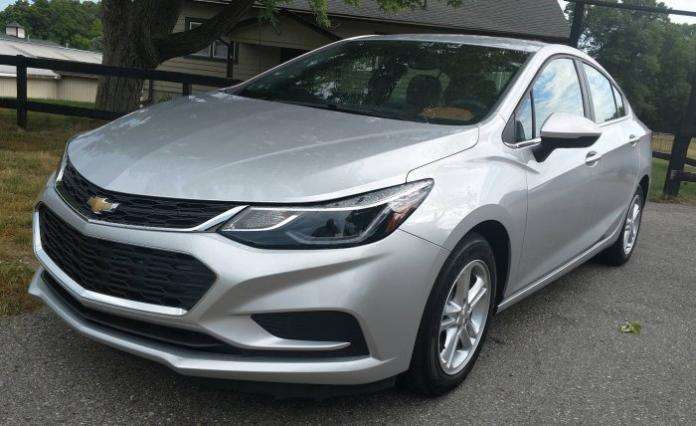 I recently spent a week behind the wheel of the 2017 Chevrolet Cruze Diesel and after hundreds of miles of city and highway driving, I have come to the conclusion that the diesel Cruze is the best Cruze – and here are four reasons why.
Advertisement

There was a point in time where the average driver had no interest in driving a diesel-powered vehicle every day, as the older diesels were smoky, noisy and sluggish, but modern diesel technology has fixed those issues and the 2017 Chevrolet Cruze Diesel is a beautiful example of those improvements. The Cruze diesel does have a different sound than one of the small Chevys powered by a gasoline engine, but it is hardly noisy, there is no smoke to be seen and when compared to the majority of the engines in the C-segment, there is nothing sluggish about this 1.6L turbo diesel.

In fact, the 1.6L turbo diesel engine and the accompanying standard features make the diesel-powered Cruze the best option in the modern lineup based on four key points – incredible fuel economy, excellent driving dynamics, a nicely appointed and a relatively small upcharge for the diesel engine option.

Reason #1 - Incredible Fuel Economy
Since the diesel engine option was introduced during the previous generation of the Chevrolet Cruze, the biggest selling point has been the remarkable fuel economy figures and that proves to the true with the 2017 diesel-powered Cruze. According to the EPA, the diesel Cruze with the 9-speed automatic transmission should get around 31 miles per gallon around down, 47mpg on the highway and an average figure of 37mpg.

That are all excellent numbers – numbers which make the diesel Cruze one of the most fuel-friendly non-hybrids in the compact segment, but in my time with this small Chevy sedan, I found those numbers to be off by a considerable margin.

On my routine highway driving loop, which covers about 50 miles of highway driving with a 2-mile city turnaround in the middle, I saw real world numbers of 50.6 miles per gallon. This test was performed on a 95 degree day with the windows up and the AC on full blast, in relatively light traffic. I didn’t do anything to try to improve the fuel economy numbers, spending much of the time with the cruise control set at 75 miles per hour. More impressively, I was getting closer to 53mpg until I hit some dense traffic caused by an accident, during which point I watched the number slowly creep south. I believe very strongly that had I not run into that traffic, I would have gotten at least 52mpg on that highway driving loop.

So, on a hot day, cruising with the AC on at 75 miles per hour, I beat the expected EPA highway number by 3mpg even with the accident traffic and over the course of a week, I averaged 42.9mpg – almost 6mpg better than the EPA average. Based on that, I imagine that someone with a lighter foot or better driving conditions could beat the EPA numbers by an even greater margin, but the bottom line here is that the Cruze Diesel gets excellent fuel economy on a route which is a very common path for Detroit commuters each day.

Reason #2 – Excellent Driving Dynamics
You might be thinking that lots of C-segment sedans offer fuel economy levels which are comparable to the Chevy Cruze Diesel – and you would be right – but this diesel engine is far more than just an MPG leader. With 137 horsepower and 240lb-ft of torque, the diesel-powered Cruze feels much stronger from a stop than does the gas-powered Cruze and that advantage in acceleration is also present when you look to quickly speed up on the open road.

From a stop, there is a touch of delay while the turbocharger spools to peak boost levels, but that delay is no more significant or noticeable than the delay from the turbocharged gasoline engine in the Cruze or turbo motors from the competition. Fortunately, after that brief spool time, this 1.6L diesel is a torque monster, spinning the tires and affording the Cruze a tremendous amount of mid-range pull.

More importantly, when you need a bunch of power in an instant to hurry around slower moving traffic on the highway or to merge into fast-moving traffic, the Cruze Diesel responds in an instant, allowing the small Chevy sedan to accelerate quickly and smoothly with the help of the 9-speed automatic transmission.

Mind you, I am not stating that the Cruze Diesel is the ideal tuner car for someone looking to go fast in a small sedan, but for a vehicle that offers very real 50mpg capabilities, the diesel engine and the 9-speed automatic team up to make this Cruze the most enjoyable to drive. It isn’t a race car, but it also isn’t as brutally slow as some older diesel passenger cars sold in America.

Finally, in addition to being quick from a stop and strong through the mid-range, the 2017 Chevrolet Cruze Diesel features the same ride quality and handling characteristics as the gas-powered models, so in opting for the diesel engine, buyers get comparable handling and braking along with stronger acceleration (and the big fuel economy numbers).

Reason #3 – A Beautifully Appointed Interior
On Chevrolet.com, the Cruze Diesel Automatic sedan is the most expensive model, but this isn’t just a base model Cruze with a different engine and transmission. The Diesel trimline includes remote start, push button start, the 7” MyLink touchscreen infotainment system with 6 speakers and steering wheel controls, a power driver’s seat, heated front seats, USB charging ports in the front and back, express power windows all around and while cloth seats are standard, you can upgrade to the beautiful light brown leather seats shown in the image below for just $1,125, essentially giving the Cruze Diesel the same look and feel inside as the Cruze Premier with the gasoline engine. Other than the leather seats, there are few options for the 2017 Chevy Cruze Diesel because the interior comes pretty much loaded, so while the upgraded engine and transmission are the most expensive features of the package – the company has mated that pricier drivetrain with premium interior features.

Reason #4 - Pricing
My 2017 Chevrolet Cruze test vehicle with the diesel engine and the 9-speed automatic transmission carried a sticker price of $27,395, which includes the $875 destination fee and the $1,125 leather interior package. The Cruze Diesel is technically based on the LT trimline, but the “Diesel Automatic” trimline for the Cruze sedan adds a handful of features from the top-of-the-line Premier trimline such as remote start, heated seats and an 8-way power driver’s seat, along with the option to add the Premier leather seats for $1,125. The Cruze Diesel Automatic sedan doesn’t have every feature of the Premier trimline, but it is too well appointed to compare the pricing to that of the LT sedan with the gas engine and the automatic transmission. This diesel engine package kind of falls between the LT and Premier gas-powered sedans, which start at $22,325 and $24,350 respectively. This means that with the leather package, the Cruze Diesel Automatic sedan is about $5k more than the LT (which does not have power seats, leather or remote start) and it is about $3k more than the Premier model. Considering that you are getting incredible fuel economy and improved driving dynamics, I would call that $3,000 difference between the diesel Cruze and the similarly-appointed Cruze Premier a very fair price.

The Final Word
If you are looking for a compact sedan with a plush interior that will get better than 50mpg on your highway commute and you don’t want to pay a fortune of suffer with a brutally slow car – the 2017 Chevrolet Cruze Diesel is one car that you should definitely drive before making your next purchase.

As c-segment sedans go, the Cruze Diesel has a loaded interior (when you add the Leather package), it packs solid power for all of your quick acceleration needs and it gets fantastic fuel economy – all with a price that is well below $30,000. The combination of power and fuel economy capabilities showcases the advantages of modern diesel technology while the loaded interior and low price proves that you don’t need to spend a fortune to get a comfortable, well-appointed car with 50mpg capabilities.

Aaron Fodor wrote on May 15, 2018 - 9:47pm Permalink
I have a 1.6 diesel cruze and the fuel economy is mediocre for a diesel. The engine revs way too high for a diesel which kills the mpgs. I think the first gens with the 2.0 got better. People were reporting 800 miles on a tank
Jim wrote on July 21, 2018 - 11:14pm Permalink
just purchased a Cruze diesel automatic about three weeks ago and with the same interior you show. I am impressed, I drive about 78 miles in a metropolitan area twice a week and get 53-55.7mph on the highway! I haven’t been a car driver in 40 years, I prefer trucks which I have but commuting in this car is truly amazing!