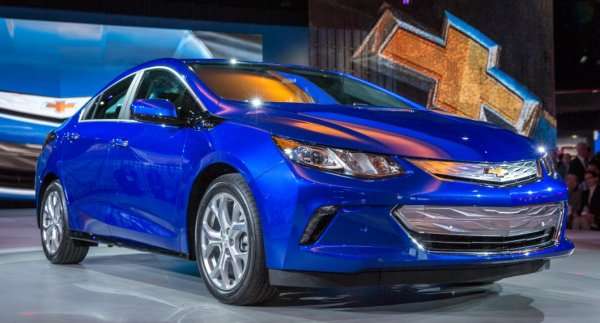 We knew that the 2016 Chevrolet Volt was getting a new look, a new interior, a new gasoline engine and a new battery system, but General Motors has now confirmed 5 key facts on the new range extended electric sedan – all of which are vastly improved efficiency numbers when compared to the outgoing 1st generation Volt.
Advertisement

The 2016 Chevrolet Volt is powered by a 18.4kWh battery system that is recharged via a new 1.5L range extending engine which now runs on regular fuel. For comparison, the 2015 Volt has a 17.1kWh battery system and a 1.4L range extending engine which requires premium fuel. If you have even a basic understanding on the key features of an electric vehicle, going to the larger battery should obviously improve range while the larger engine could offer improved charging speeds during longer drives.

However, now that the official numbers have been announced by General Motors, the figures for the 2016 Chevrolet Volt have gotten a far bigger jump than some expected. Today, we break down the key efficiency figures for the new Volt and how they help to make the 2nd generation Volt an all-around better daily driver.

Improved Electric Range
First and foremost, the 2016 Chevrolet Volt has a new 18.4kWh battery system that is about 8% bigger than the 2015 Volt battery, so we would expect that the new Volt would have at least 8% more range. However, with the 2016 Volt offering 53 miles of all-electric range, the new model can go about 40% further than the 2015 Volt, which would only go 38 miles before the gasoline engine kicked in.

Now that the 2016 Volt will go some 53 miles on a single charge without calling on the range extending gasoline engine, General Motors believes that about 90% of the miles logged on the 2nd gen Volt will be driven on pure electric power.

Much Higher MPGe
When electric drive vehicles began spreading across the American landscape, the EPA came up with “MPGe” to be able to compare the fuel economy capabilities of an EV to a vehicle with a conventional drivetrain. The conversion from MPG to MPGe may not make sense to many people, but the 1st gen Volt offers 98 MPGe, requiring 35kWh to go 100 miles. The new 2016 Volt offers 106 MPGe, meaning that you will need to burn less electricity to go 100 miles.

Improved Fuel Economy
While the first two key factors focused strictly on electric range and the EPA MPGe figures, the gasoline engine of the 2016 Chevrolet Volt is larger, but also more efficient. When you run the battery low enough to require the range extending gasoline engine for the duration of your drive, the 1st gen Volt would get around 37 miles per gallon. Even though this new 1.5L engine in the 2016 Volt is larger and runs on regular unleaded fuel, it is far more efficient, so 2016 Volt owners without any battery power can expect to see around 42 miles per gallon (combined highway and city).

Of course, the beauty of the Voltec drivetrain is that while driving on gas power, the battery system is constantly being charged, so in most situations, I have found that driving the 1st gen Volt on a “dead battery” will still yield better than the stated 37mpg.

Overall Range Up 10.5%
Finally, with both pure electric range and fuel economy ratings of the 15.L gasoline range extending engine being way up, it only makes sense that the 2016 Chevy Volt will have a big advantage in overall range over the 2015 models. The combined range – which begins with a full tank of gas and a fully charged battery and runs until the battery is dead and the gas tank is empty – has climbed from 380 miles to 420 miles. This extra 40 miles of driving distance marks an increase of about 10.5% and with this increase, the 2016 Volt will prove to be an even better option for a family that relies on a single vehicle.