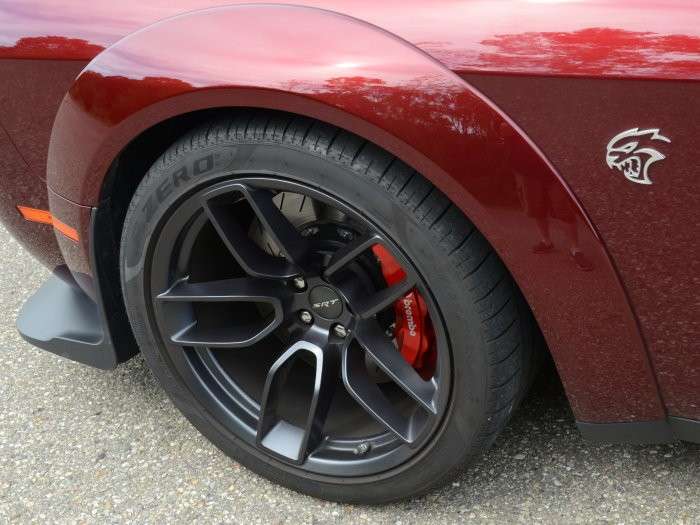 There have long been rumors that FCA is working on a Dodge Charger SRT Hellcat with a widebody kit similar to the one offered on the Challenger so today, we take a look at why a widened version of the world’s fastest sedan makes sense.
Advertisement

In the modern era of the Dodge Challenger and Dodge Charger, many of the features that were introduced on one more eventually made it to the other, with the exception of the manual transmission. They come with the same engine lineup, the same basic trim level configurations and shortly after the Hellcat Challenger was introduced, the company rolled out the supercharged Charger. Comments from company officials lead me to believe that it is unlikely that there will be a full drag race model similar to the new Challenger Demon, but there is a rumor floating around the internet that the high performance brand will offer some sort of widebody version of the Charger in the coming months.

Of course, Dodge will not discuss future models and FCA has not given us any real proof that a widebody Charger is on the way, but if the four-door muscle car does get a widened stance, it will make sense for a variety of reasons.

Today, I bring you a quick look at the three reasons why Dodge should make a Charger SRT Hellcat Widebody.

First and foremost, adding a widebody package to the Dodge Charger SRT Hellcat will allow the engineers to add wider wheels and tires under the corporate regulations on factory wheel fitment. While Hellcat Charger owners can add wider tires once they have bought the car, the tires on the current supercharged sedan are the widest that the team could equip while still meeting regulations on fitment. In the case of the Challenger, those wheel flares allowed them to equip a 315mm tire under all four corners of the new SRT Demon while the SRT Hellcat Widebody gets 305mm tires.

Installing the wider tires on the Hellcat Challenger affords the 707-horsepower muscle car better launch grip making it quicker in the quarter mile, along with improved cornering grip, leading to better cornering capabilities. The Hellcat Charger would most certainly benefit from the wider wheels and tires in the same way, so a Widebody sedan would likely get an official quarter mile time in the 10s.

The Parts are Within Reach
Having developed similar parts for the Dodge Challenger, the components needed to make a Widebody Hellcat Charger wouldn’t require a tremendous amount of research and development. Of course, the unique sheet metal and the composite flares for the Challenger wouldn’t fit the Charger, but having developed those parts for the coupe, it would only be a matter of developing the flares and the mounting points for the sedan.

Also, while having some cost of its own, the Widebody Hellcat Charger would help disperse the costs of developing the flares and perfecting the mounting method, effectively decreasing the cost-per-vehicle.

Simple Demand, More Sales
Finally, there is demand for a Dodge Charger SRT Hellcat with improved performance capabilities and some “special models”, similar to those offered for the Challenger.

Since the Challenger received the widebody treatment and the 840-horsepower model, Charger fans have been calling for some higher performance models of their beloved sedan. While some people will insist that those drivers who want something spicier than the Hellcat Charger should just buy one of the hotter Challengers, some drivers prefer or need the extra size of the four door sedan. At the same time, they still want the performance capabilities of the Hellcat package and that is why thousands of people have bought the world’s fastest sedan.

Introducing a Dodge Charger SRT Hellcat Widebody would satisfy some of the enthusiast demand for a new higher performance sedan while the improved performance capabilities is sure to attract some new buyers. For example, the Charger Hellcat Widebody very well could be a stock 10-second car, which would serve as an excellent marketing point to grab the attention of someone who wants an incredibly quick, factory-built car.

Again, there has been no word from FCA that a Dodge Charger SRT Hellcat Widebody is on the way, but with the popular rumors that one will arrive before the end of this generation, it seems like one would be very possible.