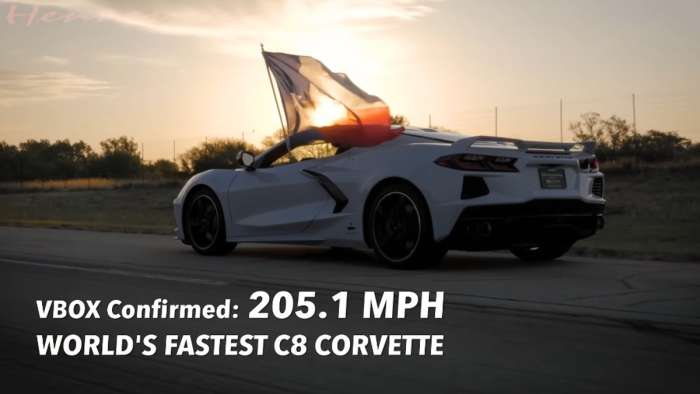 Hennessey Performance removed their twin turbo setup that they previously installed on their 2020 Chevrolet Corvette Stingray and added a nitrous oxide system along with a custom exhaust setup, lifting the output to 650 horsepower and allowing this C8 to reach a stunning top speed of 205.1 miles per hour.
Advertisement

Hennessey Performance was one of the first shops in the United States to tear into the new 2020 Chevrolet Corvette, installing a custom twin turbo setup. The Texas shop has replaced the forced induction setup with a nitrous oxide system and headed to the Continental Tire Proving Ground to see what kind of top speeds could be reached with the extra power. Not surprisingly, the combination of the C8’s sleek lines and that extra power afforded this Stingray a top speed over 200 miles per hour.

The Modified C8 Corvette
This white 2020 Chevrolet Corvette is equipped with a Nitrous Oxide system that adds 135 extra horsepower, along with a stainless steel exhaust system. According to Hennessey, the combination of the nitrous and the exhaust setup lifts the output to 650 horsepower. The team also removed the large rear spoiler of the Z51 package in an effort to remove drag.

It should be noted that the LT2 engine computer still has not been unlocked, so this Corvette is making this extra power without any actual engine tuning. They are just adding the nitrous and letting the factory computer make the needed fuel adjustments to compensate for the added air flow. Once LT2 tuning is unlocked, this Corvette, as it sits, will likely make far more power.

In stock form, this Corvette came with an official top speed of 184 miles per hour with the rear wing while the cars without the wing have a top speed of 194. Losing 10 miles per hour on the top end of things is a clear sign of drag, so that spoiler was excluded from the run. 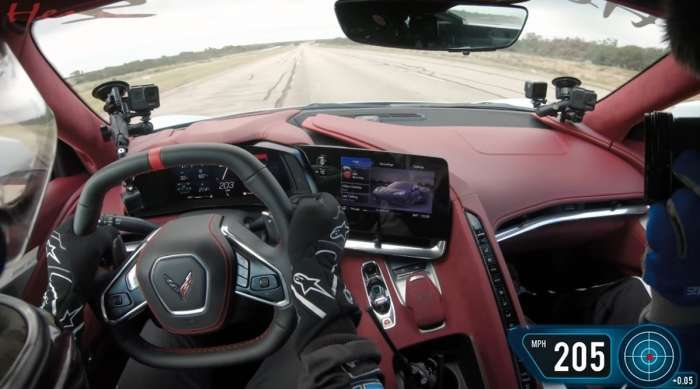 Finally, this 2020 Corvette is driven for this top speed run by John Heinricy. Heinricy is a former General Motors engineer who had a hand in many modern GM performance vehicles. Since leaving GM, Heinricy has taken a role with Hennessey, helping to develop the 300+ mile per hour Venom F5 supercar. There was also a cameraman in the car for the run, so this Vette was packing a few extra pounds.

In the video below, you can watch the top speed run from a variety of angles. From the in-car view, there is a speedometer in the corner that allows you to monitor the speed, so you can see exactly when the Corvette hits 205 miles per hour. Again, the only changes from stock are the nitrous system, the exhaust setup and the rear wing was removed. In reaching that speed, the Hennessey Stingray is the fastest C8 in the world.