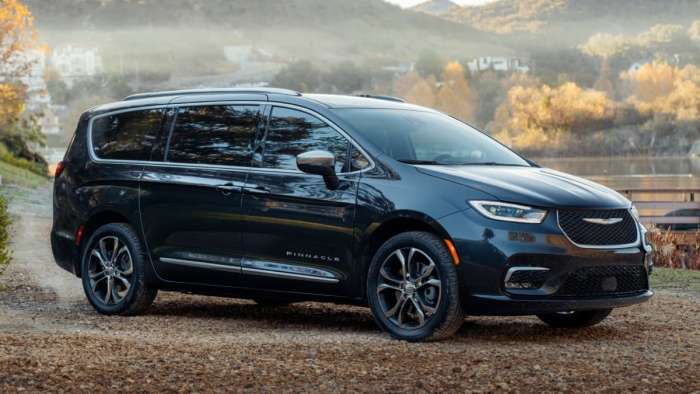 The 2021 Chrysler Pacifica Pinnacle AWD combines a spacious interior, a long list of luxury amenities and all-wheel-drive in the most capable and most comfortable minivan in the segment - rivaling small European crossovers that cost considerably more.
Advertisement

The biggest news for the 2021 Chrysler Pacifica is the introduction of optional all-wheel-drive, making it a much more capable vehicle for those who live in areas that get lots of snow. Prior to the 2021 model year, the only minivan sold in the United States with all-wheel-drive was the Toyota Sienna, giving the Japanese automaker a small advantage in the segment which has traditionally been dominated by Chrysler/Dodge. Refusing to be outdone, the Chrysler engineers developed an all-wheel-drive version of the new Pacifica, making the segment-leading minivan an even more attractive option to more buyers around the country. 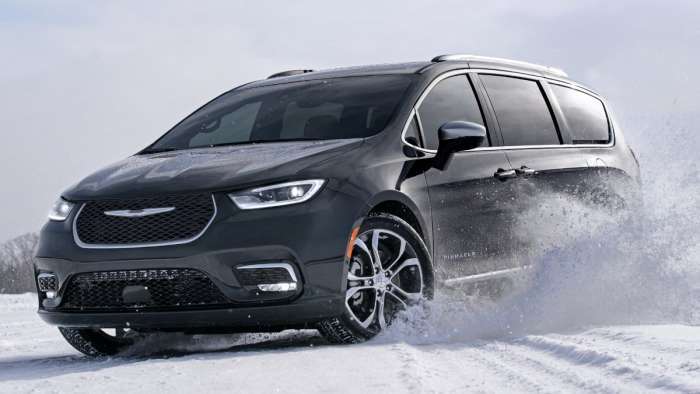 It seemed like a great idea until a tropical storm rolled into Charlotte during the same few days that I was in town to test the 2021 Chrysler Pacifica AWD. In fact, on the day that I spent driving the redesigned minivan around the area, I experienced the hardest rains of my life. Many roads were badly flooded and the ice skating rink essentially turned into a shallow pool with an icy base. As a result, I didn’t drive the AWD Pacifica on the ice, but I did drive it on the most flooded, water-logged roads I have ever seen and it performed beautifully.

It should be noted that all of the images here are from Chrysler, as there was no opportunity for me to take my own pictures of the Pacifica Pinnacle. The image above, showing the Pacifica in the snow, obviously wasn’t taken in North Carolina in early November.

The 2021 Chrysler Pacifica Pinnacle AWD
My test vehicle for the day was the 2021 Chrysler Pacifica Pinnacle AWD. Pinnacle is the new premium trimline and it is nothing short of stunning. From the new UConnect 5 infotainment system to the plush, quilted leather that wraps all of the seats, the Pinnacle trim level comfortably rivals far more expensive European luxury vehicles. The seats are as comfortable as they are beautiful and the newest UConnect system – complete with a 10.1-inch touch screen – is a flawlessly executed evolution of the popular infotainment system. With each new generation of the Chrysler UConnect system, it becomes more user-friendly while also having the bigger, brighter screen that is easier to use when you are focusing on the road. 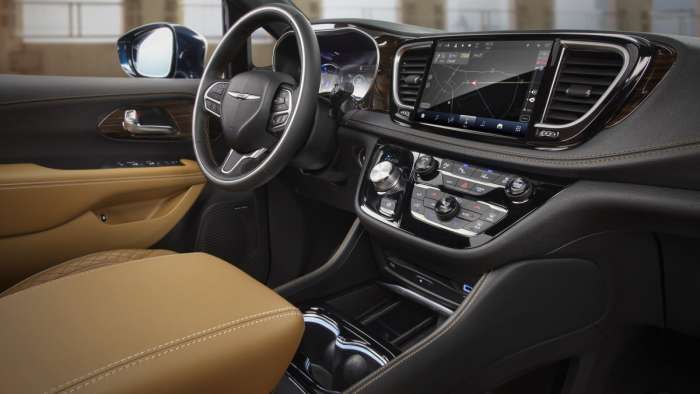 When you add in the Harman Kardon speaker system, the steering wheel audio system controls and the wireless charging pad in the center console, the 2021 Pacifica Pinnacle offers similar comforts and luxuries to six-figure SUVs for a fraction of the price. It is truly amazing how far the interior of the minivan has evolved over the past decade and the Pacifica Pinnacle is currently the most well-appointed option in the minivan segment. 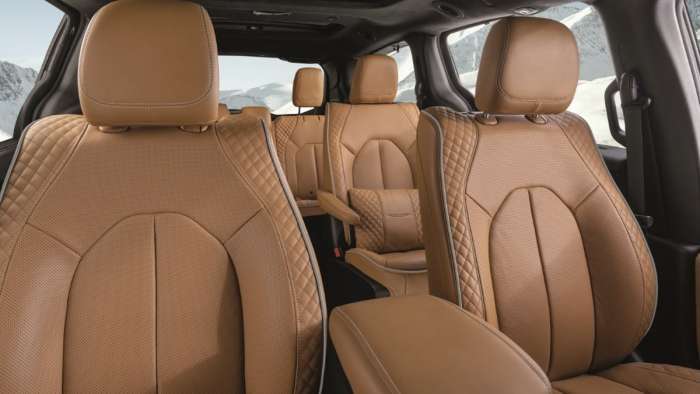 That being said, we weren’t on location to enjoy the interior of the new Pacifica. We were there to experience the new all-wheel-drive system and we were doing so while being pummeled by a tropical storm.

AWD Versus the Storm
I picked up my 2021 Chrysler Pacifica Pinnacle AWD test vehicle in front of my hotel. It was parked in a valet spot along the curb and as I ran through the sheets of water pouring from the skies, I saw that the water flowing down the road was several inches deep. There was a slight uphill grade from my hotel to the nearest intersection and while waiting to pull out into traffic, I watched a midsized sedan hydroplane into the curb at low speed. Even with the wipers on their top speed, visibility was terrible and the amount of water rushing down the city street was truly unlike anything that I had ever seen in person. The Pacifica all-wheel-drive system made short work of that first stint of flooded driving, but it would get a whole lot worse. 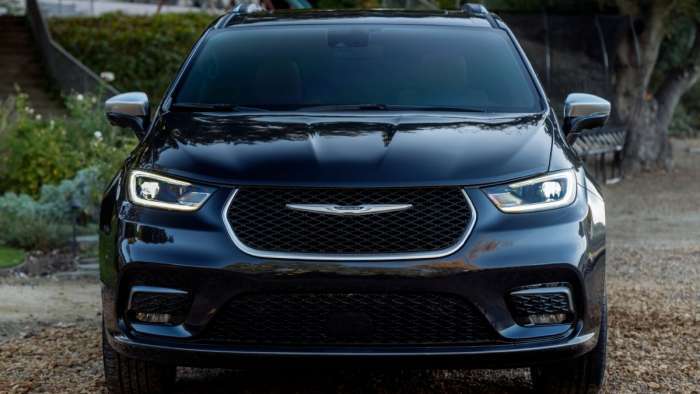 I figured that once I got to the highway, flooded roads wouldn’t be an issue, but I was very wrong. The rain was coming down so hard that even the sloped highways were flooding, as the water couldn’t flow away quickly enough. I watched a lifted four-wheel-drive truck lose control and nose-into the concrete barrier at low speed, followed by passing several other accidents where vehicles had hit the wall and other vehicles had slid into them. Many roads were closed due to flooding or accidents and some of the roads that were open had close to a foot of water in places. The driving conditions were absolutely horrible, but even on steep uphill climbs with inches of flowing water, the all-wheel-drive Pacifica barely broke a sweat.

Once I got off of the highway, I arrived at the U.S National Whitewater Center. The road into the facility is paved, but to get to the skating rink area, we took a path that ran between the other portions of the facility and the surrounding woods. We were essentially off-roading in the Pacifica to get to the morning vehicle presentation. The path was hard-packed dirt and rocks with some uphill and downhill slopes and, with all of the rain, plenty of slick surfaces. There was mud, but it wasn’t deep mud and in most cases, there was deep water flowing through the tire paths. 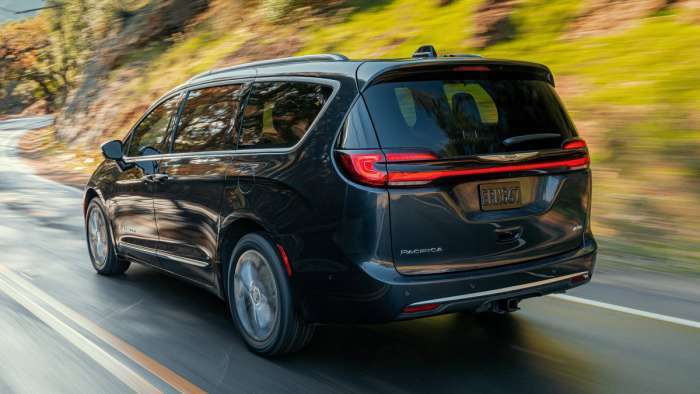 The new all-wheel-drive system of the Pacific allowed the luxurious minivan to cruise from one end of the property to the other without any problem. Of course, I was driving very slowly on the tight dirt path, but there were portions which I am certain would be a problem for a front-drive minivan in similar conditions. This new Pacifica easily got me to my off-road destination in the monsoon-like conditions.

A Great Driving Minivan
As minivans go, the Pacifica offers excellent driving dynamics. The 3.6-liter V6 allows for impressive acceleration and suspension setup yields surprising handling capabilities, feeling more like a sedan than a roomy minivan. In some cases, all-wheel-drive versions of a front-drive vehicle feel a bit more top-heavy because they sit considerably higher, but that isn’t the case with the Pacifica. If not for the AWD badging, someone driving this Pacifica on a warm, sunny day would have no idea that it had all-wheel-drive. Only when you need that extra grip does it become clear that this minivan is powering all four wheels.

Now, I understand that most people who buy minivans aren’t all that concerned with acceleration and cornering abilities, but the point here is that driving a new Pacifica doesn’t mean that you have to dread drive time. The ride quality is nice and smooth, even on rougher roads, but it will also stick to the road on a twisty country road. If you are looking to get ahead of the car next to you at a stoplight, or if you are speeding up on the highway to get around the folks driving the speed limit, the Pacifica AWD launches hard and pulls hard through the midrange, making good use of all 287 horsepower and 262 lb-ft of torque. 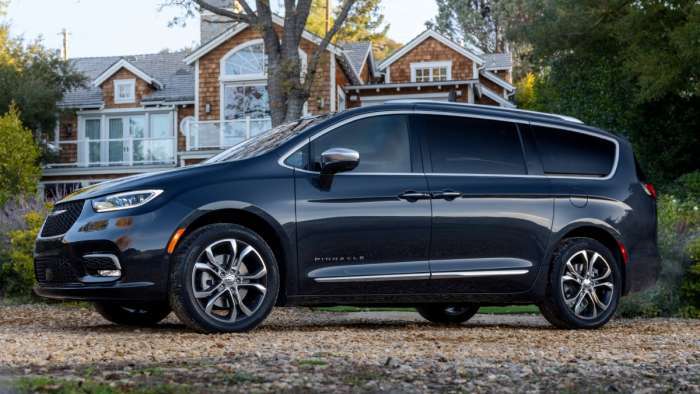 It should be noted that while I did spend some time driving in less-than-monsoon-like conditions, the all-wheel-drive system would have been active for the entire day. The system engages automatically whenever the wipers are on and at no point during the day were the wipers off. That means that I did not experience the front-drive feel, but I have put thousands of miles on the current Pacifica and the AWD model felt a great deal like the front-drive models in terms of driving dynamics and the old seat-of-the-pants dyno.

The Chrysler Pacifica is, in general, a great driving minivan. The new all-wheel-drive system takes those enjoyably driving dynamics and adds capabilities in winter weather and on unpaved road without any compromise elsewhere.

If you drive any other brand of minivan and you need all-wheel-drive, swapping to the 2021 Chrysler Pacifica Pinnacle AWD will make you feel like your old vehicle was built in another century. The interior is incredible with amenities for both front and rear riders, it drives like a dream and it is remarkably quiet, even on rough roads or in a tropical storm. 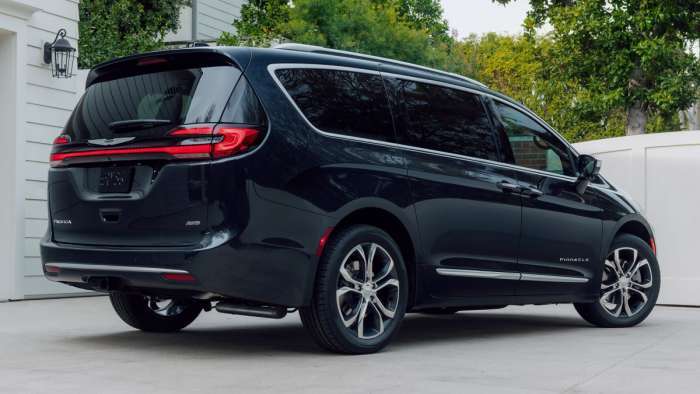 In short, if you want a vehicle that will comfortably seat seven people in the lap of luxury with a smooth ride and all-wheel-drive functionality, the 2021 Chrysler Pacifica Pinnacle AWD is one that you have to drive before making your purchase. There is no minivan on the market that offers the combination of functionality and luxury, and with the Pinnacle AWD coming heavily loaded for just over $50,000, there aren’t many luxury SUVs that can offer similar capabilities and amenities to the Pacifica Pinnacle AWD.