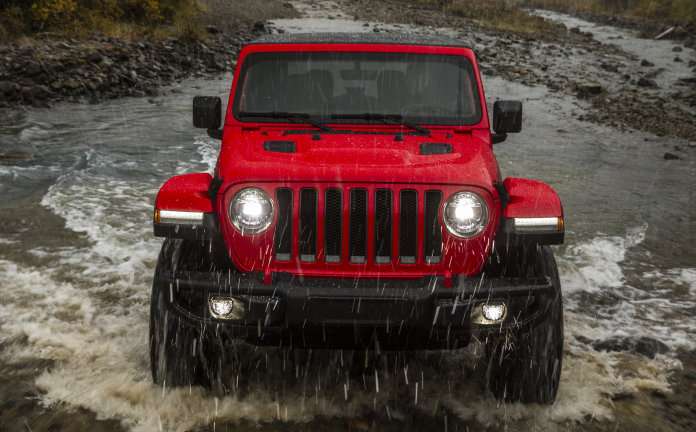 It came as a surprise when the all-new 2018 Jeep Wrangler was introduced with a new mild hybrid system mated to the 2.0L turbocharged 4-cylinder, but the even bigger news is that the 2020 Wrangler will come in plug-in hybrid form – meaning that it will offer all-electric driving.
Advertisement

The gorgeous new 2018 Jeep Wrangler will be offered with a new turbocharged 2.0L, which we all expected. What we didn’t expect was that the new turbo engine will be mated to a mild hybrid system, making the new Wrangler the brand’s first production hybrid. Jeep builds some smaller, lighter SUVs which would probably benefit more from a mild hybrid system, but the company decided to introduce the system on the all-new Wrangler. Click here for more details on the Wrangler's mild hybrid system.

Following the debut of the 2018 Jeep Wrangler with three different engines, the company dropped an even bigger surprise - the 2020 Jeep Wrangler will come with a plug-in hybrid model.

The Electric Wrangler
There were no details offered on the 2020 Jeep Wrangler Plug-In Hybrid, but the only other hybrid model in the FCA US portfolio is the Chrysler Pacifica Hybrid, which features a more elaborate plug-in system than the new Wrangler’s mild hybrid system. I have driven around a thousand miles in the plug-in minivan and if the Jeep offers similar driving characteristics to the Pacific – it is going to be a great package.

The key advantage to a plug-in hybrid like the Chrysler Pacifica is that the larger battery systems and ability to charge those batteries when parked affords the vehicle all-electric driving capabilities. The hybrid system in the 2018 Wrangler will simply assist the gasoline engine, but it will not offer any all-electric range. With the Pacifica, the company advertises an all-electric range of 33 miles, but in my own testing, I got up around 40 miles before the engine had to fire up. Even after the electric range is depleted, the engine continuously charges the batteries, as does the regenerative braking system, so the Pacifica Hybrid is always charging the batteries when the vehicle is in motion. For a detailed breakdown of the Hybrid’s drive system, click here for my most recent review.

In addition to the all-electric driving, the Pacifica’s hybrid drivetrain offers solid power, thanks to the Pentastar V6. The electric-drive system offers great initial torque, so the Pacifica is surprisingly quick for a hybrid minivan and when the engine engages, you enjoy the similar performance to the non-hybrid models.

The same 3.6L Pentastar V6 is offered in the 2018 Jeep Wrangler, so it seems reasonable that the Pacifica Hybrid drivetrain could be the powerplant for the 2020 Wrangler Plug-In. The challenge for the company would be packaging the electric components from the minivan in the Wrangler chassis, but the result could be fantastic.

Adam wrote on November 30, 2017 - 7:30pm Permalink
This is an amazing news. I wonder what mileage an electric Jeep will have. The need for electric batteries is going to grow very fast.