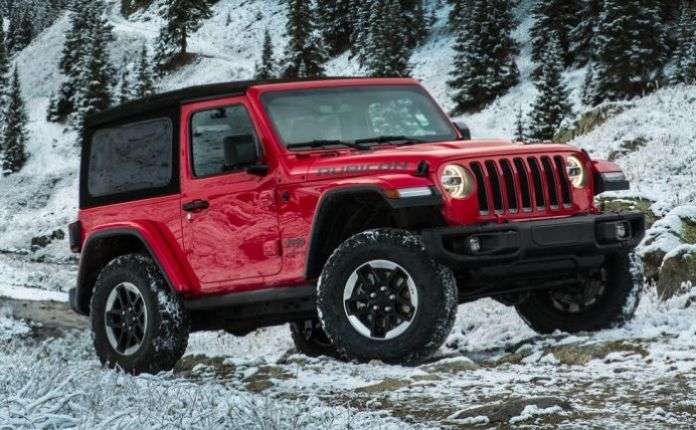 The all-new 2018 Jeep Wrangler makes its grand debut this week in LA and the biggest news is the addition of a diesel engine option as well as a turbocharged gas-electric 4-cylinder – making the new Wrangler the first ever Jeep hybrid.
Advertisement

Thanks to spy shots and the official images released earlier this month at SEMA, we knew what to expect of the 2018 Jeep Wrangler interior and exterior appearance, so with this week’s debut in LA, there aren’t many surprises in terms of styling. On the other hand, the drivetrain information is chock full of new features and the most notable is the turbocharged 2.0L eTorque mild hybrid drivetrain. This first-ever hybrid option from the Jeep brand is joined by the 3.0L EcoDiesel and the same 3.6L Pentastar V6 that is featured in the current models, all of which are mated to the new-to-the-Wrangler 8-speed automatic transmission.

The 1st Jeep Hybrid
We knew that FCA have been working on a new turbocharged 2.0L engine and it was expected to be introduced in the 2018 Jeep Wrangler. The insider reports proved to be true, as the new turbo-4 is one of the two gasoline engines offered in the all-new SUV, but what we didn’t expect is that the new turbo motor would come with a standard mild hybrid assist system called eTorque.

The 2.0L eTorque engine will offer 270 horsepower and 295lb-ft of torque, giving it more torque than the Pentastar V6, but the mild hybrid system should make this the most efficient engine in the lineup. If nothing else, it will definitely be the most efficient gasoline engine. With the help of the 8-speed automatic transmission, the eTorque system incorporates the auto stop/start, electric power assist, extended fuel shut-off, transmission shift management, intelligent battery charging and regenerative braking systems to improve the fuel economy measures of the turbocharged 4-cylinder.
Watch why Jeep Wrangler holds its value better than any other car and click to subscribe to Torque News Youtube Channel for thought-provoking automotive news analysis.

For those who are unsure, the mild hybrid system isn’t as intricate as the hybrid system in the Chrysler Pacifica Hybrid. This system will not offer all-electric driving, but in situations which require the most torque – such as pulling away from a stop – the electric assist system will add power to reduce fuel consumption. This system should also make the boosted Wrangler a little quicker from a stop, as the initial torque of the electric drive should erase any hint of turbo lag.

The Diesel Wrangler
The next new engine to join the 2018 Jeep Wrangler lineup is the 3.0L EcoDiesel. This mill has long offered in the Jeep Grand Cherokee and Ram 1500 for a few years now, helping to put them among the most fuel efficient vehicles in their respective segments. In the new Wrangler, the EcoDiesel will offer 260 horsepower and 442lb-ft of torque, so while it is a bit shorter on horsepower when compared to the 3.6L Pentastar – all of that torque should make a big difference in low end acceleration.

This engine could challenge the new 2.0L eTorque engine for the most efficient engine in the Wrangler lineup, but the diesel option isn’t expected to hit until the 2019 model year. When it does arrive, it will only be offered with the 8-speed automatic transmission.

The Pentastar Returns
Finally, the standard engine in the 2018 Jeep Wrangler is the same 3.6L Pentastar V6 which motivates the current models. This engine will deliver 285hp and 260lb-ft of torque, and unlike the other options, this V6 can be purchased with a 6-speed automatic or the 8-speed automatic. When paired with the automatic transmission, this engine will have auto start/stop (as will the other two engines), which should help with the fuel economy numbers in the real world.

FCA has been the least active of the American automakers in the modern hybrid segment, but the new Chrysler Pacifica Hybrid showed that the company knows how to build a great electric-powered vehicle. The new Wrangler is a major debut for FCA, so they must be pretty confident in this new turbocharged 2.0L hybrid if they are going to offer it in such a high profile vehicle.

It seems likely that this engine will be offered in other models in the near future – both within the Jeep brand across the other FCA brands – but for the time being, the 2018 Jeep Wrangler is the brand’s first hybrid and FCA’s first high-volume mild hybrid.

Bob Foss wrote on February 19, 2018 - 7:41pm Permalink
The real hybrid will be the 2020 model, hopefully with the 3.6 V6. This "mild hybrid" is not really a hybrid as it never runs on electric power alone. While I love my almost 300-mile range Bolt EV, when the lease is up I might consider the Wrangler hybrid that should get around 32 pure electric miles like the Pacifia. My previous 3.6 Wrangler was great, but for short commutes, I have found electric is the only way to go. Admittedly, a hybrid Wrangler is not really "green" like an EV but it is a start as we tiptoe into the EV world.