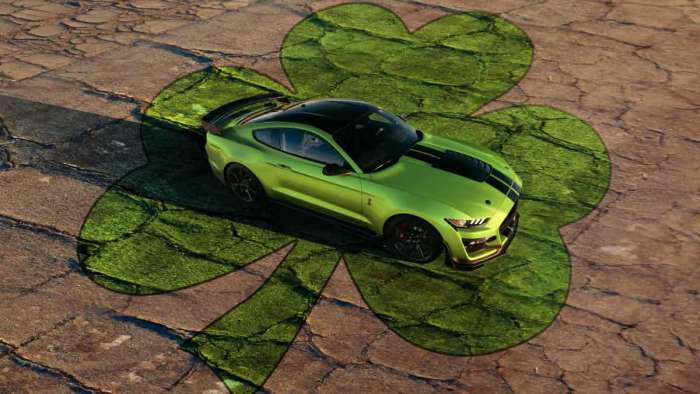 Grabber Lime effectively replaces Need for Green in the Ford Mustang lineup for 2020 and this new green will be available across the entire model range – from the base EcoBoost to the Shelby GT500.
Advertisement

The 2020 Ford Mustang is shaping up to be the most powerful pony ever thanks to the introduction of the new Shelby GT500 with more than 700 horsepower alongside the 460-horsepower GT and the 310-horsepower EcoBoost. There are no big changes planned for the EcoBoost and GT models for 2020, but as it generally the case with a new model year, there is a slightly revised color palate.

Grabber Lime Returns with a New Look
The 2020 Ford Mustang Shelby GT500 shown here is coated in the modern interpretation of Grabber Lime. While the new has been used in the past, last being offered back in 1971, the 2020 version is quite different. The 1971 Grabber Lime was a much lighter shade and in looking at pictures of ’71 Mustangs, it looks like the classic version of the color was a “flat” color without any metallic or pearl effect. 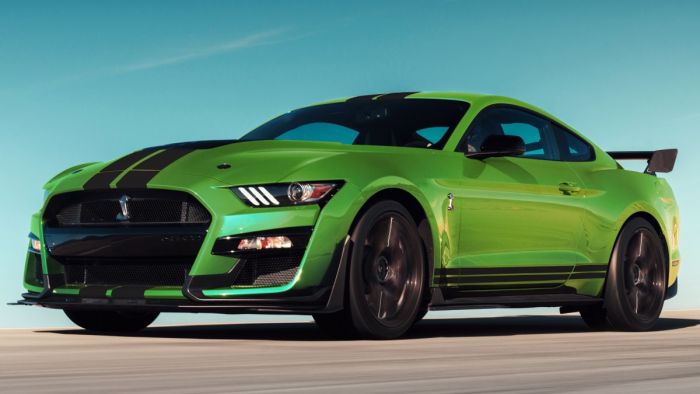 Again, Grabber Lime will be available on all 2020 Ford Mustang models, including the GT350 and the GT500, and so far it seems as though the new GT500 will not have any unique colors.

Colorful 2020
While the 2019 Ford Mustang was plenty colorful, the bestselling muscle car is getting even brighter for 2020. Grabber Lime and Twisted Orange are both far more striking than the green and orange hues that they are replacing. In fact, having seen Twisted Orange on a new GT500, it would be my first choice if I were ordering one of the supercharged Shelbys, as the car looks absolutely stunning in the bright orange.

As mentioned above, Ingot Silver and Ruby Red are being replaced by Iconic Silver and Red Hot Metallic, and unless the Bullitt package is carried over for 2020, it seems likely that Dark Highland Green will be removed from the option list.

Colors from 2019 that we expect to see carryover include Race Red, Oxford White, Magnetic and Shadow Black. There are also two blues offered for 2019 – Velocity Blue and Kona Blue – but the 2020 GT500 has been shown off in a blue that doesn’t appear to match either of those colors. So, there could be a new blue announced at some point as a replacement for one or both of the 2019 blue options, but in any case, we can be sure that at least one blue will be offered on the 2020 Mustang.