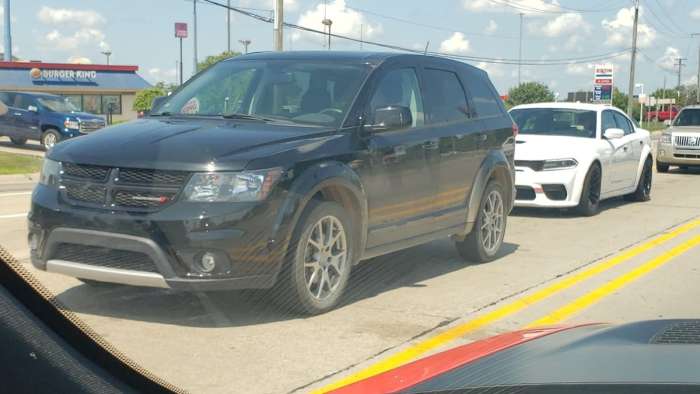 After grabbing attention with a flashy vinyl wrap on the 2020 Dodge Charger SRT Hellcat Widebody test cars, the eye-catching disguises have been removed.
Advertisement

Earlier this afternoon, I was driving through Novi, Michigan when I noticed a white 2020 Dodge Charger with the new widebody design sitting in traffic at an upcoming intersection. With traffic crawling along, I was able to get my phone out of the holder and snap a few pictures as I passed by in my Hellcat Challenger and as you can see, a couple of them came out well enough to share.

This is the first undisguised widebody Charger I have seen on the street and while at first, I wasn’t sure what trim level of Dodge super-sedan this might be, I believe that this is one of the original SRT Hellcat test cars with the flashy camouflage removed. Provided that is the case, the automaker is no longer worried about hiding the lines of the widened Charger, instead letting everyone get an eyeful of the new design.

2020 Dodge Charger Hellcat on the Street
As you may recall, the 2020 Dodge Charger SRT Hellcat Widebody was first shown to the public at the LX Spring Festival in California earlier this year, but during the week leading up to that huge event, test cars began popping up around Detroit. These cars had a white, black, grey and red vinyl wrap that helped to both draw attention and hide the lines of the unique body design, with the “SRT” logo incorporated into the colorful layout in several places.

This past weekend, I saw one of those loosely camouflaged 2020 Dodge Charger SRT Hellcat Widebody test cars with the colorful wrap in traffic, but I wasn’t able to get a picture. Fortunately, this time I had my phone nearby and traffic was moving slowly enough in both directions that I was able to capture the car on digital film. 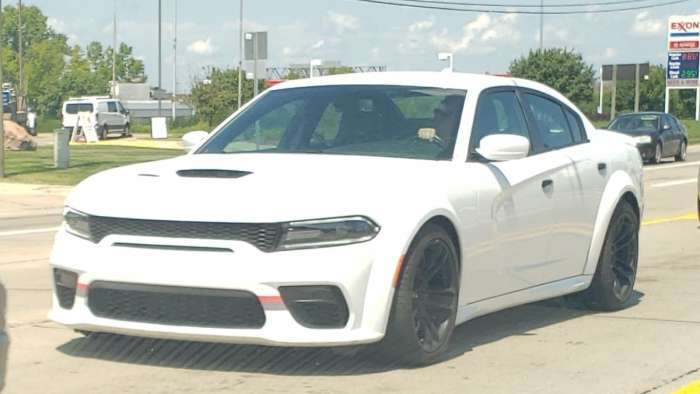 As you may have noticed, there are no badges on the fenders or grille of this car, but I believe that it is one of the 2020 Charger SRT Hellcat Widebody test cars that previous wore the flashy camo. If you look at the area of the lower-front fascia between the outer vents and the large central grille, you can see that there are still two small stripes on each side – one grey and one red. While the car that debuted at SpringFest didn’t have stripes there, but the car that Wesley Motorsports ran at Pikes Peak did and while I don’t think that this is that raced-car, I do believe this to be a Hellcat Widebody test car.

Keep an Eye Out in Metro Detroit
Whether or not this is one of the early test cars (and I fully believe that it is), the fact that this 2020 Dodge Charger SRT Hellcat Widebody is out on the street without any sort of disguise makes it clear that the company is no longer hiding the design. This means that in the coming weeks, we are likely to see more of these widened Dodge sport sedans on the road around Metro Detroit as the company ramps up pre-production testing.

Watch 4 Reasons Why the 2020 Dodge Charger Widebody Will Succeed. Click to subscribe to Torque News for daily Dodge and automotive news analysis.

However, without the flashy graphics, these new Chargers do blend in with the landscape a bit, especially in white, but for those who cruise Woodward Ave, I wouldn’t be surprised to see this car in traffic some night.