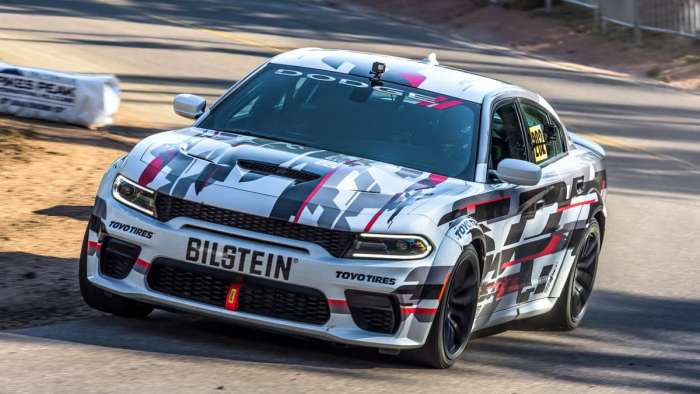 Since Dodge introduced the 2020 Charger with the new widebody design, there is more demand than ever for a super sedan with the Hellcat Redeye engine.
Advertisement

When Dodge introduced the Challenger SRT Hellcat Redeye for the 2019 model year with 797 horsepower, many people in the American performance world expected that a Charger with the same engine would be quick to follow. After all, up until the release of the 2018 Demon and the 2018 Redeye models, the Challenger and Charger had shared the same engines, but while the coupe has offered buyers as much as 840 horsepower, go-fast-sedan fans have been restricted to settling for just 707 horsepower.

This has left the Dodge Charger fans without a proper step-up from the current Hellcat and that lack of updated power has led to some disgruntled folks in the Mopar community. When it was discovered that a Charger widebody was coming for 2020, many people expected that, like the Challenger, the wider sedan would feature the Redeye engine with nearly 800 horsepower, but with much of the information on the 2020 Dodge Charger being announced, we are still without a more powerful model.

As a result, demand for a Dodge Charger SRT Hellcat Redeye is as high as it has ever been and with other, higher performance models being introduced from other automakers, FCA needs to get in gear and roll out a 797-horsepower sedan soon.

The Redeye Package
For those who are somehow unfamiliar with the Dodge Challenger SRT Hellcat Redeye, the keystone of the package is the 6.2-liter Hemi, topped by a 2.7-liter IHI supercharger. While the engine sizes are the same, the Redeye engine has a larger supercharger and a handful of internal upgrades that allow the stronger Hemi to deliver 797 horsepower and 707 lb-ft of torque, compared to 717 horsepower and 650 lb-ft of torque in the standard Hellcat Challenger.

The rest of the features of the Challenger Redeye are similar to the original Hellcat models, including the specially-tuned ZF 8-speed automatic transmission, the adaptive suspension system, the huge Brembo brakes and the exterior appointments. Basically, the Redeye is a Hellcat Challenger with a whole lot more power, and that is exactly what Charger fans want from the muscular Dodge sedan.

Building the Charger Redeye
In theory, the process should be simple, as Dodge has the engine and all of the supporting features needed to make the 797-horsepower engine work in the Challenger; they just need to transplant it into the Charger. Of course, the company would have to go through emission certification and fuel economy testing with the Redeye sedan, but dealing with government regulations will be the most difficult and most costly aspect of the project.

Especially now that the 2020 Dodge Charger SRT Hellcat comes with the standard widebody design, the super sedan seems primed and ready to feature a 797-horsepower engine and enthusiasts know that. This is why so many Dodge fans on Instagram, YouTube, Facebook and Twitter are clamoring for a Redeye Charger, as they know that the company has the engine, the company has the car and the market has the demand – Dodge just needs to build them. In fact, the company has already kind of built one in the form of the Pikes Peak race car shown above, which I was told by insiders features a uniquely-tuned version of the Redeye Hemi.

Fortunately, my insiders have told me that it is a matter of “when”, not “if”. We might be waiting until the 2021 model year at this point, but the same people who told me about the widebody Charger weeks before it debuted have also told me that a Redeye is on the way – we all just need to be patient.

See you in my next story where I discussing how the 2020 Dodge Challenger will be different from the 2019 model.