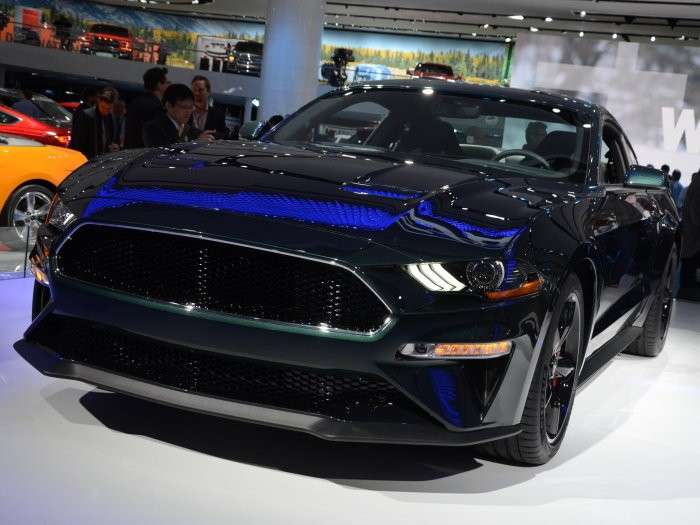 The 2019 Ford Mustang Bullitt edition will be offered in Europe with the same features that make the special package so sharp, but the movie-themed muscle cars shipped overseas will have a bit less power – while still offering more power than the standard Mustang GT.
Advertisement

To celebrate the 50th anniversary of the Steve McQueen movie Bullitt, Ford Motor Company has rolled out a new special edition package for the Ford Mustang that applies the look of the original movie car to the modern muscle car. The 2019 Mustang Bullitt made its grand debut earlier this year at the 2018 North American International Auto Show in Detroit and earlier this month, it made its European debut in Geneva.

Upon being introduced to the European crowd, it became official that the 2019 Ford Mustang Bullitt would be sold outside of the US with unique features inside and out, and more power than the current Mustang GT.

The 2019 Bullitt Mustang
The 2019 Ford Mustang Bullitt is based on the newest Mustang GT fastback in either Shadow Black or Highland Green. The unique features of the package include 19-inch wheels, bright red Brembo brake calipers, a taillight panel with a faux gas cap with the Bullitt logo, a black upper grille with chrome trim and a removal of the other badges around the exterior.

Basically, this car (when ordered in the appropriate Highland Green exterior hue) takes the look of the Bullitt movie car and applies it to the 2019 Mustang GT, with the exception of the Bullitt logo on the rear end. The movie car was dark green with black wheels, no badges and minimal bright trim – just like the new production package.

On the inside, the 2019 Bullitt Mustang features a premium sound system, the new 12-inch digital gauge cluster and a short-throw shifter topped by a white shift knob.

Extra Power
Most importantly, the 2019 Ford Mustang Bullitt package adds a little power over the standard Mustang GT. In Europe, the basic Mustang GT offers 450 PS and 529 Nm of torque, which translates to 444 horsepower and 390 lb-ft of torque. The Bullitt being sold in Europe offers the same torque output, but thanks to a new air intake system and an engine calibration, the movie cars offer 464 PS – or 457 horsepower. So in addition to the unique exterior and the loaded interior, the 2019 Bullitt Mustang gets 13 more American horsepower.

Less Power than the US
Although the 2019 Ford Mustang Bullitt being sold in Europe offers more power than the standard European Mustang GT, both of those 5.0-powered muscle cars pack less power than their American counterparts.

The Mustang GT sold in the US delivers 460 horsepower and the Bullitt packs 475, while both feature 420 lb-ft of torque. Due to the emission requirements in Europe, the tuning changes made on those cars headed overseas end up reducing the output by 16 to 18 horsepower.

Fortunately, even with those slightly reduced power numbers, the Ford Mustang GT still offers more bang for the buck than most competitors around the world – helping the Mustang to become the world’s bestselling sporty car.