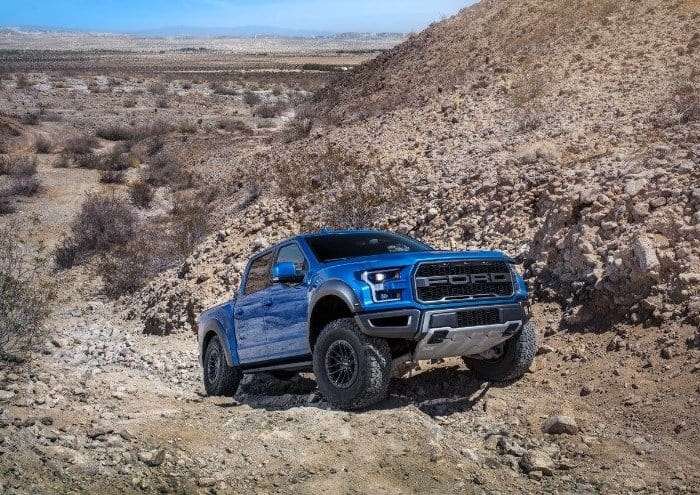 When the 2019 Ford F-150 Raptor reaches dealers later this year, it will be even more off-road-capable thanks to Trail Control – a new, high-tech system that is literally cruise control for off-roading situations, making covering tricky footing much easier for inexperienced drivers.
Advertisement

The current Ford F-150 Raptor is arguably the most off-road-capable production truck in the US market, but an unskilled or inexperienced driver might find themselves in a tough situation that they don’t know how to escape. In other words, the modern Raptor is the most capable half-ton truck ever sold in the US, but it requires some skill to make the most of the Raptor’s capabilities.

Ford is trying to help lessen the skill level required to enjoy the new Raptor, introducing Trail Control for the 2019 model year. This system handles the throttle and brake, leaving only the steering to the driver while the truck works to get steady traction in just about any situation.

Trail Control in Action
Imagine that you are driving your new Ford F-150 Raptor along a tough off-road trail when you come to a steep uphill climb with loose footing. Your friends have more experience than you and they have no problem getting up the hill, but you find yourself struggling to get to the top with your Raptor. You find that you keep digging in too much, getting stuck and forcing you to back down the hill for another try. Time after time, you get stuck trying to climb the hill and you are about to give up when you remember that your 2019 Raptor has Trial Control.

You engage Trail Control, you set the speed to 1 mile per hour and you hold onto the steering wheel while the high tech system easily pilots your Raptor to the top of the hill.

A short time later, you approach a steep downhill climb that is most certainly the steepest hill you have ever driven down. You are sure that you will go too fast and lose control, tumbling down the hill and becoming a popular Fail Army YouTube video. Trail Control can save the day once again, carefully easing the truck down the hill, monitoring vehicle speed and departure angle to safely get back to level ground.

The video below shows Trail Control in action in the 2019 Raptor in a variety of settings, illustrating how easily and how well it works.

Engaging the System
Trail Control in the 2019 Ford F-150 Raptor is engaged via a button mounted high on the dash. Once engaged, the system asks the driver to select a speed between 1 and 20 miles per hour. At that point, the system works to maintain a steady forward speed, using wheel speed sensors and the sensors from the Truck Apps to make careful uphill and downhill progress.

In a situation where the Raptor gets stuck while using Trail Control, the driver is instructed to use the steering wheel buttons to reduce the set speed to 1mph. From there, the Raptor will operate each wheel independently in order to dig itself out.

Trail Control takes the skill out of climbing a loose hill while taking the risk factor out of heading down a steep, dangerous hill. The 2019 Raptor with Trail Control will arrive in dealerships later this year and those who don’t want to face the cost of the Raptor can also get the 2019 Ranger with this system.