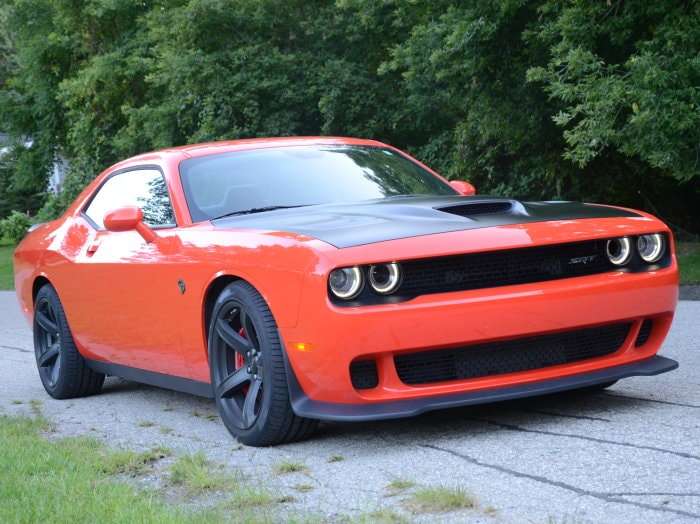 There haven’t been any official details on the 2019 Dodge Challenger, but rumors and insider input suggests that the next model year could see a Hellcat model with more than 707 horsepower – but less horsepower than you might expect.
Advertisement

Last year, some images surfaced online showing a Dodge Challenger SRT Hellcat with the massive Air Grabber hood of the Challenger Demon and reports claimed that the car also had the SRT Drive Mode screen of the 808 horsepower muscle car. Based on that, a great many people (including myself) speculated that Dodge was working on a Hellcat Challenger with more than 707 horsepower.

Of course, the automaker won’t comment on something like that until the time comes to introduce the vehicle to the public, but recently, some rumors have been floating around the internet that the 2019 Challenger would deliver more power. Fortunately, I was able to speak with two different industry insiders who confirmed that there is a very real chance that the 2019 Challenger SRT Hellcat could pack more than 707 horsepower.

Mind you, neither of these insiders would actually confirm that we will see a Hellcat Challenger with more than 707 horsepower, but at the same time, the fact that they said that there was a chance leads me to at least discuss the possibilities.

A Stronger Hellcat Hemi
According to these industry insiders, there is a chance that we could see a Dodge Challenger SRT Hellcat with more than 707 horsepower for the 2019 model year. They were quick to point out that it likely wouldn’t feature the same rating of 808 horsepower as the 2018 Challenger Demon, as the company won’t want to out-do their current flagship muscle car. One individual said that he as fairly certain that they would stay away from the 800 horsepower level, but it would offer a significant upgrade over the current Hellcat cars.

If these rumors and the industry insiders prove to be right, the output of the 2019 Dodge Challenger SRT Hellcat would depend on the official horsepower ratings of the new Ford Mustang Shelby GT500. We know that there is a supercharged Mustang coming for 2019 and we know that it will offer at least 700 horsepower, but we don’t know how much more. Dodge might be waiting for Ford to make the announcement of those official numbers, at which point the SRT engineers will come up with a power number that will out-gun the new Shelby.

It has been speculated that the GT500 could offer 772 horsepower and 743 lb-ft of torque. If that proves to be true, the Challenger could be rated as high as 780 horsepower, leaving plenty of space between itself and the Demon while also overpowering the new Mustang. On the other hand, if the 772hp Mustang rumor proves to be inaccurate and the new GT500 “only” offers somewhere in the area of 725 horsepower, we could see a Hellcat with somewhere in the area of 740-750 horsepower.

While my insiders are generally very reliable, they are quick to point out that nothing with the 2019 Hellcat Challenger is set in stone as far as they are concerned. They have explained that there are several variables that could impact the production of a spicier Hellcat in 2019, but right now, it seems that there is a chance that there will be even more horsepower for sale at your local Dodge dealership by this time next year.

C. Turner wrote on February 13, 2018 - 7:37pm Permalink
Dodge may consider placing focus on reduced weight of the Hellcat. A 3800lb car would be nice.
Thomas Crawford wrote on February 13, 2018 - 11:46pm Permalink
I am going to say 800 horsepower.
Ken Bell wrote on February 14, 2018 - 9:56am Permalink
Its fairly well known that the current Hellcat already produces well above the advertised 707HP. I've seen everything from 630 to 670 at the wheels, so even on the low end, it's making at least 740 at the crank. I hope it is a real increase, but it's possible dodge is just deciding to be honest about their power number.