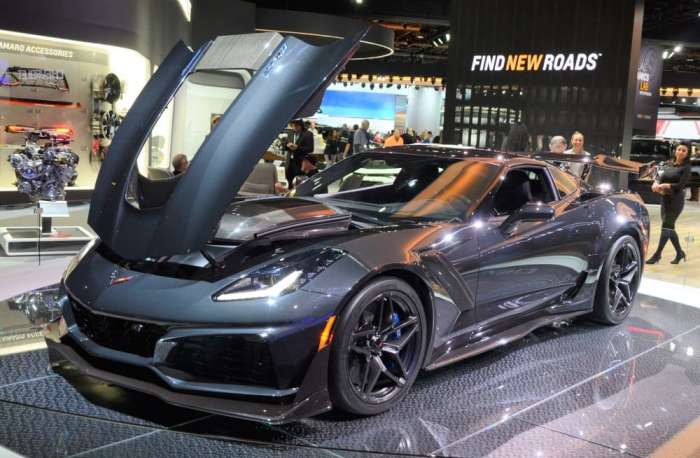 The Chevrolet Corvette offers performance that can rival the best sports cars from around the world and the Vette does it for less money, although that gap will shrink a bit as GM is raising prices on the entire 2019 model range.
Advertisement

This news comes to us from Corvette Blogger, who got full 2019 pricing information from their friends at Kerbeck Chevrolet in Atlantic City, New Jersey. Every single Corvette for 2019 is getting a price hike, ranging from $405 for the Stingray and Grand Sport coupe while the ZR1 convertible pricing climbs by $2,500 for the new model year.

Declining Sales
The C7 Chevrolet Corvette was introduced for the 2014 model year late in the 2013 calendar year and not surprisingly, the return of the Stingray was met with loads of interest. Corvette sales soared with the arrival of the C7 with nearly 4,000 units sold in the first month of full availability and during the 2014 calendar year, Chevrolet sold almost 35,000 Corvettes, with several monthly sales totals in the 3,500 to 3,800 range, but in 2015, Corvette sales were down to around 33,000 units. For 2016, sales dropped to just under 30,000 units and for 2017, Chevrolet sold just over 25,000 units, so in the span of four calendar years, Corvette sales dropped by around 10,000 units or nearly 30%.

That decline has continued through the first few months of 2018, with the Corvette posting its worst January, February and March sales in years. Starting in April, GM went to a company-wide quarterly reporting system, but for the second and third quarter of 2018, Corvette sales remain lower than the past years during the same periods.

The bottom line here is that sales of the C7 Corvette are on a steady decline and with the expectation of a new generation (likely with a mid-engine design) on the way, C7 sales are likely to remain low, but Chevrolet is still raising prices on 2019 models going forward.

Raising prices while sales are on the decline is a curious move, but in the long run, these price hikes aren’t going to run off anyone who has their heart set on a 2019 Corvette.

Update: The C7 Corvette Inventory Is Diminishing Regardless of Upcoming C8 Reveal.

DeanMcManis wrote on December 21, 2018 - 1:08am Permalink
I think that slow Corvette sales are first because it is approaching winter, and since the mid engined Corvette is coming soon. Still, the new ZR-1 is an amazing car by any measure, and even with the price hikes it is a relative bargain compared to it's competition, and especially to anything that performs as well.

LG's New EV Battery Plant Is a Welcome News for Tesla
Tesla Giga Berlin's New Hurdle: It's Not Only the Gov't, but Now Tesla Itself
END_OF_DOCUMENT_TOKEN_TO_BE_REPLACED