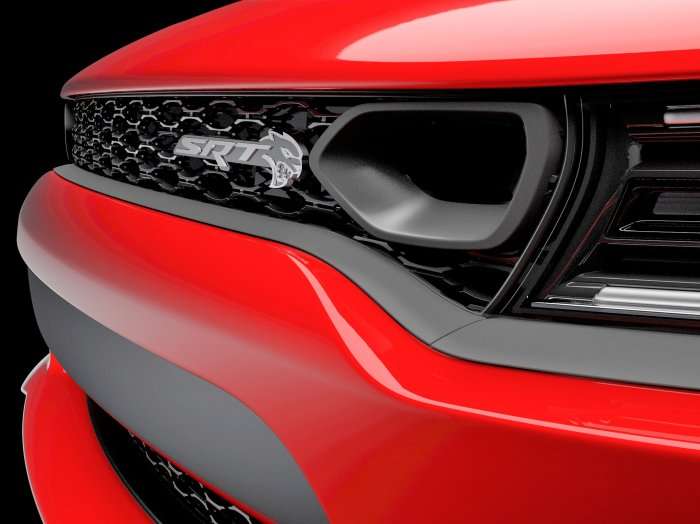 We knew that the 2019 Dodge Charger SRT Hellcat would be getting a new grille design with at least one added vent, but spy shots of a new Scat Pack model shows that other models will get the new grille design and – as expected – there is a vent on both sides of the new design.
Advertisement

About a month ago, FCA rolled out the first teaser image of the 2019 Dodge Charger SRT Hellcat, shown above. This close-up shot reveals a new vent in the grille and it looks as though there is a matching vent on the other side, but that was purely speculation. Fortunately, spy shots posted on Allpar show that there is indeed a vent on both sides of the restyled grille and – more importantly – this new grille design is not specific to the Hellcat model.

New SRT Design Grille
One of the interesting features of the modern Dodge Charger is that there are two completely different front end designs spread across the model lineup. The Charger in SXT, GT and R/T form has one front end design while the Daytona, Scat Pack, SRT 392 and SRT Hellcat all have a different, more aggressive face. That has been the case since the refreshed 2015 Charger was introduced, as back then, the SXT and R/T shared one design while the Scat Pack, SRT 392 and Hellcat shared the other look. As new performance models have been added, such as the Daytona and Daytona 392, those models wear the SRT-style front end while the new GT model wears the look of the SXT and R/T.

In some cases, this has been a point of contention for SRT 392 and Hellcat owners who believe that the premium performance models should have their own look, but for Dodge, offering the aggressive SRT-style front end has proven to be a popular option for many Charger buyers.

When the first teaser of the 2019 Charger was introduced last week, we knew that the Hellcat would get the added grille vents, but based on the spy shots of a new Scat Pack posted on Allpar, it looks as though all of the SRT-styled sedans will get the new grille design.

Frankly, I think that the new design with the added vents looks great, giving the Charger an even more aggressive face.

No Other External Changes
While the 2019 Dodge Charger R/T Scat Pack captured on film has the new grille, it looks as though everything else around the outside of the car is unchanged. There was speculation that the headlights would be restyled a bit, but they appear to be the same on the undisguised test car, as is everything across the back of the car.

Now, we should point out that there is a possibility that this Charger Scat Pack test car has the new grille while lacking some other 2019 changes. Perhaps the Dodge engineers didn’t bother to disguise this test car because they are using a 2018 design with the 2019 grille design that the company has already shown off, but if this is a complete 2019 test car – it looks as though the grille with be the only cosmetic change (at least on the Scat Pack models).