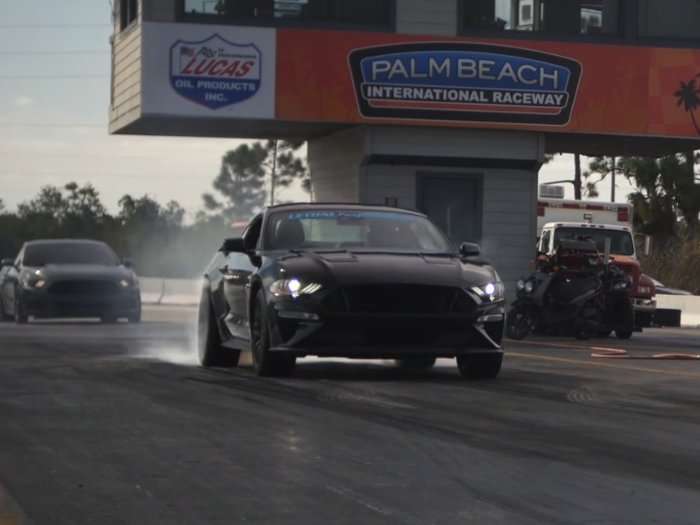 The 2018 Ford Mustang GT shop car from Lethal Performance ran an 11.68 with sticky tires, an engine tune, stronger driveline components and the 10-speed automatic transmission – but it broke the stock half shafts on the way to that mid-11 run.
Advertisement

We recently brought you the news that a 2018 Ford Mustang GT fastback being tested by Hot Rod Magazine had run in the high 11-second quarter mile range in stock form with the new Michelin Pilot Sport 4S tires of the GT Performance Pack. Today, we bring you the news that with drag radial tires and an E85 engine tune, the Lethal Performance Mustang GT shop car ran an 11.68 at 119.4 miles per hour.

That is a great time for a car with so few performance-adding upgrades, but it should be noted that the Mustang-modifying experts at Lethal Performance added some driveline upgrades after stock components failed.

The Lethal Performance 2018 Mustang GT
The 2018 Ford Mustang GT fastback being used as the shop car for Lethal Performance was initially upgraded by adding sticky drag radial tires before heading to the track for some baseline test runs. The team ran an 12.20 at 116mph with their drag radial and performance package-equipped Mustang, quite a bit slower than the numbers turned in by Hot Rod. On their next run, when the 10-speed transmission quickly shifted from 1st to 2nd, it broke the left side half shaft.

That forced the team to upgrade their 2018 Mustang GT with a set of heavy duty half shafts and a carbon fiber driveshaft from the Driveshaft Shop, along with a driveshaft loop.

Then, before heading out to the track for another test session, Lethal Performance added an engine tune to maximize the output with an E85 alcohol blend. We don’t know how much power that tune added, but with the sticky tires and the stronger driveline bits – the team was able to get down the quarter mile a whole lot faster.

The Mid-11 Mustang GT
When this 2018 Ford Mustang GT went back to the track with the tune, the drag radial tires and the stronger driveline bits, the driver was able to launch the car as hard as possible without concern of breaking anything – and that led to big improvements in track times.

The Lethal Performance shop car made a series of runs in the 11.7 range before running their best time – and the best time we have seen from a new Mustang with tires and a tune – or 11.68 at 119.4 miles per hour.

We are sure to see even quicker quarter mile times from this car in the near future, but in the meantime, 2018 Mustang GT owners know that with sticky tires and a good tune – their new pony car is a solid mid-11-second machine. However, owners are going to want to think long and hard about installing new, stronger half shafts before heading to the track with drag radials.

Would you run the car with stock half shafts until they break, or would you upgrade right away? Tell us in the comments below.

Jeff wrote on February 1, 2018 - 10:19pm Permalink
You know, this has been a common problem with high HP Mustangs for 20+ years now. You'd have thought they would design in a bit more robustness by now. Odd though, but as the car is still "stock", is this a warranty fix?
EVOLIX wrote on February 3, 2018 - 10:20am Permalink
Your mistaking a drive shaft for a half shaft which has only been on 2015 mustangs and up. Plus they were running drag radials and E85 tune which more than likely caused drive line shock and snapped the weakest link, hence the left drive shaft snapped. Being that mods and overly aggressive launch contributed to the failure. There is no way that is being covered under warranty, lol!
greg darm wrote on January 27, 2020 - 8:29pm Permalink
Bought a used 2018 mustang pp1 with bridgestone tires.Plan on racing the car and street driving it.What tire would you suggest,Thank you.

LG's New EV Battery Plant Is a Welcome News for Tesla
Tesla Giga Berlin's New Hurdle: It's Not Only the Gov't, but Now Tesla Itself
END_OF_DOCUMENT_TOKEN_TO_BE_REPLACED