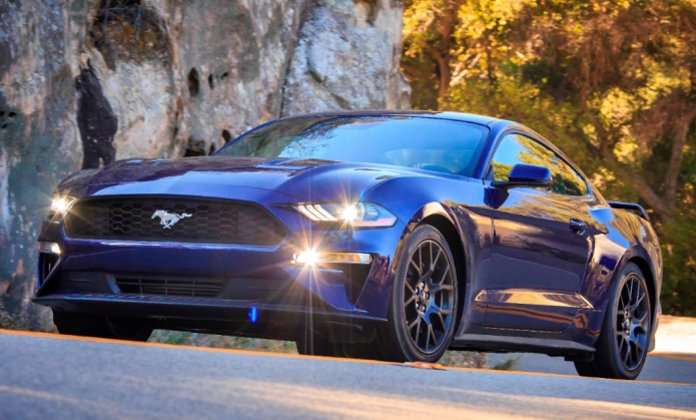 We knew that the 2018 Ford Mustang GT would cover the quarter mile more quickly than the outgoing models, but it is mighty impressive that the folks at Hot Rod laid down a series of 11-second runs on their first trip to the track with the new muscle car.
Advertisement

The 2018 Ford Mustang GT has a new look, many new features and more power than the outgoing 2017 models. The extra horsepower and torque, the aggressive gearing of the 10-speed automatic transmission and the introduction of the new Drag Mode is sure to make the 2018 Mustang GT a better straight-line car than the 2017 models, predicting a stock quarter mile time in the low-12s.

The bad news is that those initial predictions were a bit off, but the good news is that the 2018 Mustang GT is a whole lot quicker than we expected. Based on testing by Hot Rod Magazine, a properly-equipped car is about a second quicker than the outgoing models – running in the 11.80s in stock form in good air.

Hot Rod Runs the 2018 Mustang GT
When the official specs on the 2018 Ford Mustang GT were announced last year, we learned that the 460 horsepower muscle car would dash from a stop to 60mph in under four seconds. We didn’t get an exact number, but with the ability to hit 60 in less than four seconds, it seemed likely that the new Mustang would be able to run deep into the 12-second range. This comes after the 2017 Mustang GT in stock form turned in times in the 12.7-12.9 range, so if the new model gets down into the low 12s, owners will enjoy an improvement of more than a half-second.

When the folks from Hot Rod took their 2018 Ford Mustang GT test car to Orlando Speedworld, it was a cool day (57 degrees F) with excellent density altitude (just over sea level). The car was fitted with the 10-speed automatic transmission, the MagneRide suspension system and the GT Performance Pack with the new Michelin Pilot Sport 4S tires. With those rear tires dropped to 28psi and the Drive Mode system set to Drag Mode, Hot Rod made a series of quarter mile runs and every one of them was in the 11-second range.

Although these runs were all made near sea level on a cool, Florida day, Hot Rod’s day at the track leaves no question that a well-driven 2018 Ford Mustang GT will run stock 11-second quarter mile times – making it right around a second quicker than the 2017 models.