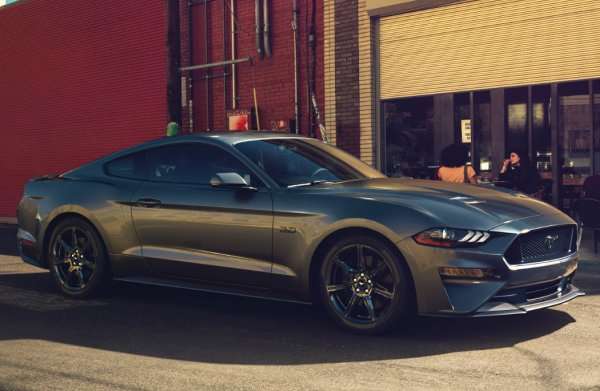 Ford Motor Company has announced that the refreshed 2018 Mustang GT will have a revamped 5.0L V8 with more horsepower and more torque and while they haven’t said just how much more, I expect figures of at least 455 horsepower – if not more.
Advertisement

Ford Motor Company surprised everyone last month when they introduced a refreshed 2018 Ford Mustang at a private event outside of the Detroit Auto Show. The key attraction with the 2018 Mustang is a refreshed exterior with a strikingly different front end (compared to 2017 models), but we also learned with the introduction of the 2018 Mustang that both the EcoBoost and V8 engines would be getting an increase in power.

For the 2.3L EcoBoost 4-cylinder, which is now the base model engine with the removal of the 3.7L V6, buyers will get slightly more torque in 2018 than they do with the 2017 models. We don’t know how much more, but with no mention of an increase in horsepower, I would guess that the torque jump will be fairly low. The current EcoBoost Mustang offers 310 horsepower and 320lb-ft of torque, so for 2018, I would guess that we will see somewhere in the area of 340lb-ft of torque.

The new Mustang GT
While the turbocharged 4-cylinder is only slated to gain torque in the 2018 Mustang, the 5.0L V8 in the 2018 Mustang GT is promised to gain horsepower and torque. Ford hasn’t stated how much, but after Ford communications boss Mike Levine tweeted an image of the Mustang’s new high tech gauge cluster with the car in 4th gear, driving at 55mph, many people believe that 455 could be the horsepower number.

On the other hand, what if that 455 refers to the torque levels of the 2018 Ford Mustang GT? Ford has stated that the 2018 5.0L V8 would have higher compression and an improved fuel delivery system, so it seems feasible that Ford got the torque levels up around 455lb-ft and if that is the case – horsepower levels would likely be up over the 475 mark.

This is all purely speculation, but if nothing else, it seems likely that the 2018 Ford Mustang GT will have at least as much horsepower as the Camaro SS.