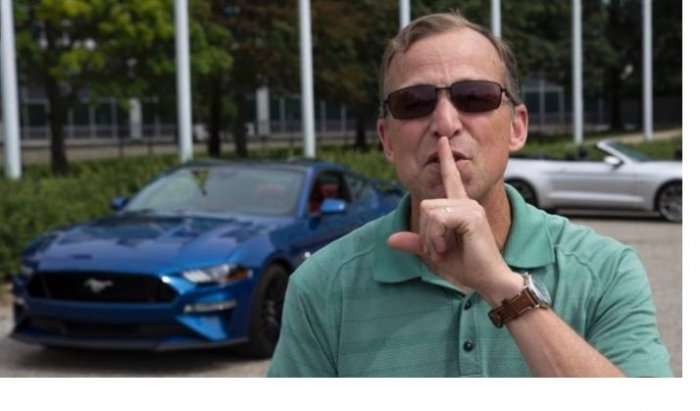 The 2018 Ford Mustang GT has an active exhaust system which lets the driver pick their desired level of engine roar, but in addition to having varying levels of loudness – the new Mustang GT exhaust system also has a quiet mode for when you are leaving the neighborhood early in the morning.
Advertisement

Active exhaust systems have become a popular feature in many performance cars sold in the US, so it comes as no surprise that the 2018 Ford Mustang GT comes with an exhaust system which allows the driver to pick the volume level. Like the active exhaust system on the Chevrolet Camaro and the Dodge Challenger, the 2018 Mustang muffler system can be set to be loud, louder or the loudest, but unlike the Dodge and Chevy systems – the new Mustang also features a Quiet Mode for those mornings when you want to head to work without waking your family (or the neighbors).

2018 Mustang GT “Good Neighbor Mode”
While Steve von Forester was driving a new Shelby GT350 Mustang during his tenure as the head of vehicle engineering for Ford Motor Company, one of his neighbors called the police early one morning when von Forester started the high performance pony car in his driveway. The neighbor was upset of the sound level of the exhaust system and as a result, the police were called. No ticket was issued, but this gave the Ford exec an idea for future pony cars – an exhaust mode which made the car very quiet.

According to Ranker.com, loud vehicle exhaust systems are one of the most common complaints within quiet neighborhoods, so von Forester and the team set out to fix that problem with the 2018 Ford Mustang GT. The result was an active exhaust system which not only gets louder with the push of a button, but it also gets much quieter…and you can preprogram the times of day when the car starts in the quiet exhaust mode.

The 2018 Ford Mustang GT active exhaust system features four sound levels – Normal, Sport, Track and Quiet. As you might imagine, Normal, Sport and Track are loud, louder and loudest, but the Quiet setting is unlike anything offered from the competition and it doesn’t stop at just a quieter exhaust tone. The Mustang GT also has Quiet Start mode, which can be preprogrammed in cooperation with the car’s clock system to automatically switch the active exhaust system to Quiet Mode during certain times.

“Active valve performance exhaust gives Mustang owners the best of both worlds – that classic Mustang sound, and the ability to not wake up your neighbors when you leave the house early in the morning or arrive home late at night,” said Matt Flis, Ford exhaust development engineer. “When sounds get up into the upper-70-decibel range, that’s typically about when they start to bother people. With quiet start activated, the decibel level of the new Mustang GT drops by about 10 decibels, to a much more comfortable 72 decibels – about the level of a household dishwasher.”

For instance, if a 2018 Ford Mustang GT owner leaves for work every morning at 7am, he or she can set Quiet Start mode to be active from 6am to 8am, so anytime that the car is started between those hours, it will do so with the quietest exhaust mode. This way, when the Mustang GT owner leaves for work, he or she won’t wake anyone in their own home, or cause any of the crybaby neighbors to call the police.

Finally, in addition to allowing the 2018 Mustang GT to start quietly in the morning, the driver can switch from any of the louder exhaust modes to Quiet Mode when on the fly with the buttons on the steering wheel. This will come in handy when a Mustang GT driver doesn’t want to attract the attention of the police during a night of spirited driving. The police might get calls about a noisy Ford Mustang racing around town, but when the police see the 2018 Mustang GT roll by, it can be whisper quiet thanks to the high tech exhaust system.

Check out the video below for a closer look at how the 2018 Ford Mustang GT Quiet Mode works.

Really... wrote on August 2, 2017 - 3:22pm Permalink
Wish there was a mute mode for neighbors bitching. It should be ok to call the cops on them for being cunts.