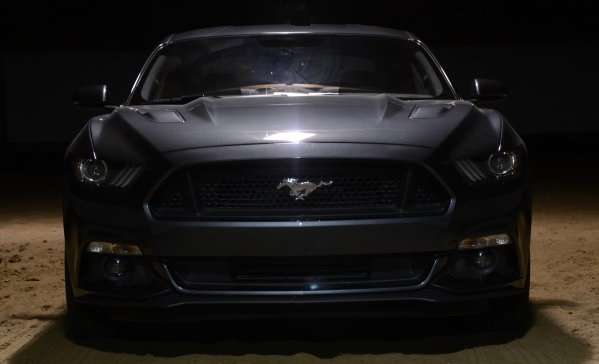 According to information gathered from Ford’s dealership system and posted on the enthusiast website Mustang6g.com, the 2018 Ford Mustang could lose the V6 engine option while adding the 10-speed automatic transmission and the MagneRide suspension setup from the current Shelby GT350 – while still offering the GT350 and GT350R for those who want a stronger-handling pony car.
Advertisement

Ford Motor Company hasn’t had anything to say about the 2018 model year, but a member of Mustang6g.com who has access to the Ford Motor Company dealership computer system has done some digging with very interesting results. This member found that there are some new colors coming, but more importantly, the 10-speed automatic is listed as is the MagneRide suspension setup and those options are both seemingly available for both the EcoBoost and GT Mustangs.

No More V6?
First off, the person who did the investigating for Mustang6g.com found that the body codes for the current V6-powered Ford Mustang come up as invalid for the 2018 model year. This leads the member to believe that the V6 engine option will no longer be available for 2018, and I am inclined to agree. The EcoBoost 4-cylinder is more powerful, more efficient and all around a better engine, so it will serve as a great base engine in the 2018 Ford Mustang.

This could technically increase the Ford Mustang base MSRP, since the V6 is the standard engine in the least expensive current Mustang, but the price difference between the V6 and the EcoBoost is negligible when you consider how much better the EcoBoost engine is than the V6.

10-Speed Automatic Transmission
Next, the dealership employee found that the 2018 Ford Mustang will seemingly be offered with the 10-speed automatic in both EcoBoost and GT trim – so both the turbocharged 2.3L 4-cylinder and the 5.0L V8 could benefit from this new gearbox.

This is a similar transmission to the one used in the 2017 Ford Raptor F150 and the 2017 Chevrolet Camaro ZL1, having been developed jointly by Ford Motor Company and General Motors. Replacing the current 6-speed automatic with this new 10-speed unit should make the 2018 Mustang more efficient while also improving low end and mid-range acceleration.

In the Camaro ZL1, the 10-speed is promised to shift quicker than the Porsche PDK dual-clutch transmission, so this gearbox in the Ford pony car should go a long way in making the 2018 Mustang an all-around better performance car.

MagneRide Suspension
One of the features of the new Shelby GT350 and GT350R which makes these pony cars so incredible on a road course is the MagneRide dampers, which will seemingly be offered on the 2018 Ford Mustang EcoBoost and GT. Considering the cost, I don’t expect that the MagneRide dampers will be standard across all of the non-Shelby Mustangs, but I would expect that these suspension goodies will be included in some sort of Performance Package – if not as a standalone option.

The addition of MagneRide dampers to the 2018 Ford Mustang EcoBoost and GT models will help these cars handle better on the road and on the track without compromising ride quality. Similar high tech suspension setups have played a huge role in making the Dodge Challenger and Chevrolet Camaro such great road-handling machines while maintaining a smooth ride, so the Mustang will be a better car with these adaptive dampers.

There is mention in the dealership system of an optional dual exhaust system for the 2018 Ford Mustang, which could be some sort of dual-mode system – similar to those in the Camaro and Challenger. There is also something called “Performance Package 2”, but there are no details. Perhaps this Performance Package 2 will add the MagneRide dampers, the dual mode exhaust system, a beefier braking system, some lightweight wheels with stickier tires and improved cooling features for those who want to do some racing…but that is purely my own speculation.

New colors for the 2018 Ford Mustang include Orange Fury and Royal Crimson, while the 2018 Shelby Mustang will get Lead Foot Gray as well. Kona Blue will return, but Grabber Blue appears to be gone and there sounds as though the 2018 Mustang will get a carbon fiber interior package – although we don’t know if it is an appearance package or an aerodynamic performance package.

Steve wrote on November 21, 2016 - 3:32pm Permalink
I knew all of this except for them dropping the V6, given the V6 car is the rental target, I wonder if this also means Ford intends to drastically reduce the number of Mustangs sold as rentals. If so that is too bad, for many the vacation is the Mustang....