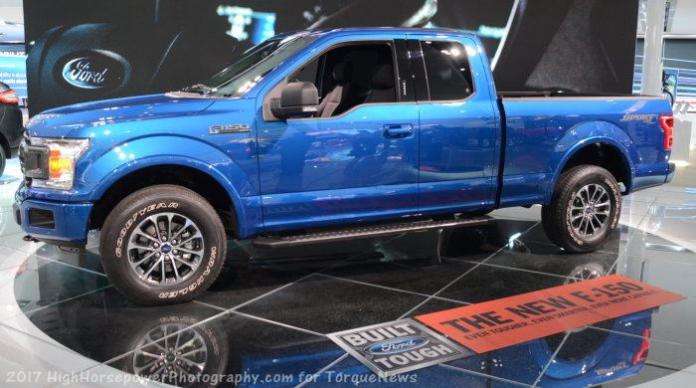 The 2018 Ford F150 gets a new look, more power and more efficient drivetrains, but these new features come with a relatively low price increase from 2017, with the 2018 models starting just $270 more than the trucks at dealerships today.
Advertisement

There has been no official word from Ford Motor Company, but reports citing the Motor Company order guide claim that the base model 2018 Ford F150 pickup will have a starting price which is $270 higher than the comparable 2017 F150. This information comes from CarsDirect.com, who offered up the pricing for the base model truck and a few options throughout the model line, but we don’t get full line pricing. However, the slight increase of the 2018 F150 base model suggests that when compared on feature-by-feature basis to the 2017 F150, the refreshed half ton pickup doesn’t cost a whole lot more.

The 2018 Ford F150 XL is powered by a new naturally aspired 3.3L V6 and while power numbers haven’t been announced, we can expect that it will offer at least as much power as the outgoing 3.5L V6. That mill produces 282hp and 253lb-ft of torque, so we can expect that the new 3.3L V6 will offer at least 282/253, while also offering better fuel economy.

In the long run, a price increase of $270 is immaterial and it is hardly anything to complain about, considering that 2018 Ford F150 XL buyers will get similar power, better fuel economy and a new design inside and out.

With the 2018 model year rapidly approaching, it shouldn’t be long before we have the full pricing for the 2018 Ford F150, but based on this base model pricing, it looks as though the new look doesn’t come with a huge price increase.

LG's New EV Battery Plant Is a Welcome News for Tesla
Tesla Giga Berlin's New Hurdle: It's Not Only the Gov't, but Now Tesla Itself
END_OF_DOCUMENT_TOKEN_TO_BE_REPLACED