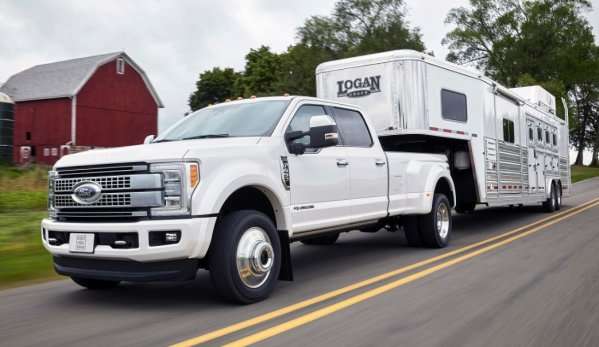 The 2017 Ford Super Duty is Aluminum, Lighter and Stronger

Ford Motor Company has dropped the first bits of information on the 2017 F Series Super Duty pickups and while that information is brief at best, today’s announcement offers us our first images and the first official information on the next generation heavy duty Ford trucks – including the facts that they are lighter, stronger and wrapped in an aluminum skin.
Advertisement

Before we get into what we learned today, the bad news is that today’s announcement doesn’t include any solid figures on the 2017 Ford F Series Super Duty lineup. We don’t have exact weight figures or exact power figures or exact capacity figures, but the first images of the 2017 Super Duty are accompanied by plenty of hints as to what we can expect when the Motor Company does release the full specifications.

"Ford Super Duty is the truck America's hardest-working men and women trust and depend on," said Joe Hinrichs, Ford president, The Americas. "We are helping these customers build a better world by delivering a new generation of pickups that set new benchmarks in capability, performance and efficiency."

Obviously Aluminum
We have been speculating for more than a year now that the next generation Ford F Series Super Duty pickups would follow the trend started by the 2015 F150 of using lightweight, high strength aluminum for the body panels. When a Ford truck believed to be a next generation Super Duty test truck burned and quickly melted in the desert, it was all but confirmed that the new heavy duty F Series pickups would have aluminum body panels. Today, it is confirmed.

This is no real surprise to anyone, as there have been no real downsides of the 2015 F150 aluminum body in a year’s use, so Ford went ahead and lightened up the new generation F250 and F350 as well.

More importantly, in addition to being lighter, the 2017 F Series Super Duty lineup is promised to be the strongest ever. In addition to stronger transmissions, axles and suspension components, the 2017 F250 and F350 will have thicker frames made with greater levels of high strength steel. With the 2017 Ford SDs weighing less, they will pick up towing and hauling capacity on that end, but the stronger suspension and drivetrain components will allow these trucks to safely do even harder work than the current Super Duty pickups. We don’t know how much towing and hauling numbers will improve, but Ford states that those numbers will be better than ever.

“The bottom line is Super Duty customers will be able to tow and haul more than ever before,” said Craig Schmatz, Super Duty chief engineer.

Drivetrain Lineup
The 2017 Ford Super Duty will arrive with the same engine lineup as the current heavy duty pickups, beginning with a 6.2L V8 and 6.8L V10 that run on gasoline along with the 6.7L PowerStroke diesel V8. Ford promises that these engines will be more powerful than past models, but no power numbers have been stated.

The announcement doesn’t state what transmissions will be mated to the PowerStroke diesel or the gasoline V10, but it does state that the 6.2L V8 will be mated to the TorqShift-G heavy duty 6-speed automatic transmission. With the 6.2L being the “entry level engine”, I would expect that the stronger engines would have this same gearbox and – sadly – no manual transmission is mentioned. Those who want a stick-shift Super Duty should probably keep their fingers crossed without getting their hopes up too much.

Why So Vague?
Many people are wondering why Ford is being so vague with the details of the 2017 Super Duty pickups. With these trucks being marketed at 2017 model year vehicles, they aren’t likely to reach buyers until this time next year, if not later. This gives Ford around a year to hype up the new Super Duty before they hit showrooms and during that year, we can expect a steady trickle of information to keep us all talking about the newest heavy duty pickups.