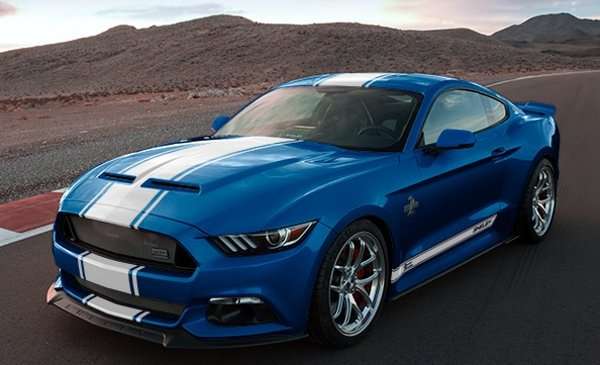 The team at Shelby American has announced the details of their newest Super Snake package for the 2017 Ford Mustang GT – with a vintage look, 670 horsepower and a price tag starting right around $71,000.
Advertisement

Right now, the most powerful Mustang you can buy from your local Ford dealership is the 526 horsepower Shelby GT350, but Shelby American has just announced their 50th anniversary Super Snake package for the 20117 Ford Mustang GT, which delivers at least 670 horsepower for roughly $70,000 (before any other options). Like all modern Shelby American packages, the 2017 Super Snake is a post-title package, meaning that isn’t a factory package, but for someone who wants a modern Mustang will monster power and the vintage Shelby look – the newest Super Snake is a smokin’ deal.

However, unlike many of the high priced Shelby American packages we discuss, the 2017 Super Snake is actually pretty reasonable – carrying a base MSRP (for the package) of $36,795. Buyers will need to provide the Mustang GT on which their Super Snake will be built, which starts at $34,095 with destination, so the car and the package will run you around $70,890 before options (on the car from Ford, or from Shelby American).

The 2017 Super Snake Mustang Details
When Shelby American builds each of the 500 2017 Super Snake models, they will start with a Ford Mustang GT with the 5.0L V8, but thanks to a supercharger and Ford Performance exhaust system – output is increased from 435 to 670 horsepower. There is also a higher performance supercharger setup which offers 750 horsepower, but that it not included in the $36,795 MSRP of the 2017 Super Snake. The 750hp upgrade adds $6,500 to the bottom line and while there are no performance figures for the 670hp package, Shelby claims that the 750hp Super Snake will dash from 0-60 in 3.5 seconds while running through the quarter mile in the high 10 second range.

After the power is taken care of, the Shelby Super Snake package turns to handling, adding a Ford Racing suspension setup with unique dampers, springs, sway bars and bushing, along with a huge Wilwood braking package with 6-piston calipers up front and 4-piston units out back. Those big brakes are tucked under package-specific 20 inch wheels wrapped in “Shelby spec” tires.

Next, Shelby American adds a unique body kit package which gives the Mustang GT a far more aggressive design – punctuated by the twin-inlet hood scoop design. There are also package-specific lights, stripes and badging, so when it is all said and done, there is no question that this is a Shelby Mustang.

Finally, the inside of the 2017 Shelby Mustang Super Snake gets 50th anniversary logos on the seats and floormats, unique doorsill plates, a unique Shelby branded gauge cluster and a dash plaque with a serial number.

It should be noted that this new Super Snake package is available for all 2015+ Mustang GTs, but only the 2017 models will get the 50th anniversary designation. The rest of them will “only” be 670hp Shelby Super Snake Mustangs.

So, if you have a 2015-2016 Ford Mustang GT, or you are planning to buy a 2017 Mustang GT, and you are looking to spend about $35k on an elaborate high performance package – the new Shelby American Super Snake could be an attractive option. However, with only 500 units planned for production, interested buyers will want to contact Shelby sooner than later.